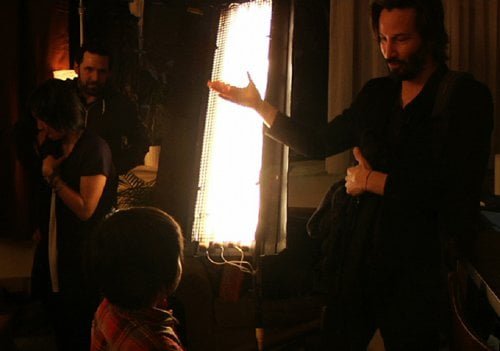 As actor Keanu Reeves, who produced with Justin Szlasa, tells us at the onset, the art of filmmaking is at a hugely historic moment, with celluloid film itself being mothballed in favor of constantly evolving digital technology. Reeves talks with directors, cinematographers, editors, visual effects artists and colorists on both sides of the argument looking at images captured via silver halide crystals versus digital pixels "Side by Side."

This is an extremely thoughtful, informative and entertaining documentary with input from such luminaries as David Lynch, Martin Scorcese, David Fincher, James Cameron, Steven Soderbergh and George Lucas, as well as veteran cinematographers like Vittorio Storaro and digital trailblazer Anthony Todd Mantle, who won the first cinematography Oscar for a digitally shot film ("Slumdog Millionaire"). Reeves' narration is a bit bland, like a carefully enunciated school lesson, but his interview sessions are lively and intelligent. If there is a problem with "Side by Side" it is that one expects an actual side by side comparison of footage shot on film vs. various digital cameras. We do not get that. The celluloid argument, in fact, is given less time overall than the evolution of digital technology, despite an early (unidentified) subject proclaiming that he does not want to 'give up my oil paints for a box of crayons.' Reeves and writer/director Christopher Kenneally (who did post-production work on Reeves's "Henry's Crime") cover every aspect of what this change is affecting, from screening dailies to what Keanu dubs 'immediatelys' to the flexibility of camera placement to how effects are created to the actor's experience on set, to editing, projection and archiving. Photochemical film purists point to its texture and the discipline it forces (David Lynch may love digital, but his great works are on film) and argue that, ironically, it is the only true way to archive movies. David Fincher discusses how many of his commercial and video work from the 80's can no longer be played because of format changes. Hard drives fail. Digital, however, is a far cheaper medium. Digital technology is being embraced by more and more filmmakers as its quality improves. Early digital movies were often dismissed because of their cheap video look, but even the first digitally shot movie, Dogme '95 film "Celebration," allowed Todd Mantle to place his smaller, lighter camera in places he'd never before dreamed of. Now someone like Michael Mann can 'look into the night' as he did in "Collateral" and find things that would not be seen on film. There is a shift in power. Cinematographers have a lot more of it shooting on celluloid. Yet their resulting images can be manipulated more to their liking on digital. When the argument is made that nothing is 'real' anymore, we're reminded that nothing about cinema was ever 'real' in the first place. And Martin Scorcese makes the bold statement that 'The real auteur of a film is the projectionist.' One of the chief pleasures of this digitally shot documentary is how highly technical subject matter, like color timing, is broken down for a lay audience. After seeing "Side By Side," you may never watch a movie quite the same way again.