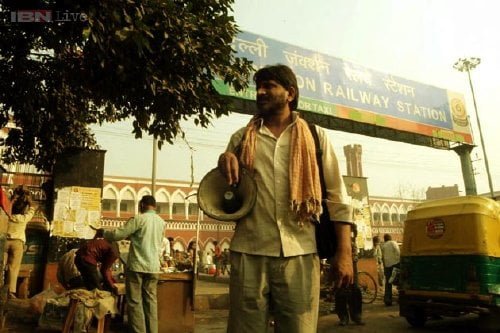 New Delhi chain-wallah Mahendra Saini (Rajesh Tailang) can barely support is family fixing zippers on the street, so when an opportunity to employ his 12 year-old son at his brother-in-law Ranjit's (Anurag Arora) distant cousin's trolley factory presents itself, the father feels safe sending the boy away. But when he doesn't return for the Diwali holiday and a wedding-preoccupied Ranjit appears at the train station without him, Mahendra begins to fear the worst and begins a long odyssey in search of "Siddharth."

Writer/director/editor Richie Mehta ("Amal") has created a modern day "Bicycle Thieves" with this devastating tale of an illiterate man trying to find his son with next to nothing to go on amidst the teaming masses of India. Mehta has crafted a tale rich in socioeconomic commentary as Mahendra seeks help from authorities, relatives, factory owner Om Prakash (Amitabh Srivasta), his own customers and strangers on the street. Despite the depressing implications of his story, the director still imbues his film with hope and even bits of humor. Mahendra and his wife Suman (Tannishtha Chatterjee, "Brick Lane") live in what looks to Western eyes like a concrete bunker. Their young daughter Pinky (Khushi Mathur), though, can dial and manipulate a cell phone without even glancing at it. Siddharth's young cricket playing friends cannot shed any light on his whereabouts so Mahendra takes away their goal post, scattering the game away from his door. When he calls Prakash, he's told his son 'ran away two weeks ago,' news that had already been given to Ranjit (we later learn that Suman's brother received a commission for sending him, a betrayal with sinister implications that hang in the air). Turning to a traffic cop he knows, Mahendra is directed to the station where he's chastised by the female officer for disregarding child labor laws. He has no photo to give the woman and, downtrodden, returns home and immediately takes one of Pinky. Mahendra is determined now to travel to the factory, but it's almost impossible to raise the fare on 25 rupees a day (less than $1). Suman begins to resent her husband's inability to provide, increasing his desperation, but he makes his way to Punjab and while Prakash remains unhelpful, Mahendra gets a tip from his son's former roommate, who tells him that missing kids are taken to Dongri. Mahendra cannot find anybody who's ever heard of this place, but he believes in it, asking everyone he can until a woman whose handbag he's repairing locates it on her Smartphone as a region in Southern Mumbai. (Mehta's film was inspired by just such a question from an illiterate man searching for his son in this mythical place.) Tailang grounds this film with his plodding decency. We see the fear grow in his eyes as the enormity of his situation envelops and confuses him. Your heart cannot help but go out to this man whose simple act of trust has turned into a nightmare. When he mistakes another boy for his own son, his anguish is palpable as we realize his fading memory has come back to haunt him, how we take things for granted when preoccupied with the daily toil of living. The man's naivety is highlighted when he's commandeered by Mukesh-Bhai (Mukesh Chhabra, "Trishna"), the leader of a gay street gang who charge him for the right to do business while making sport (thankfully, Mukesh-Bhai is not what he at first seems). The drabness of the Sainis' New Delhi wanes as Mahendra travels farther than perhaps he ever expected. Mehti adds more and more bursts of color, signalling optimism. Cinematographer Bob Gundu has a great eye for composition, lending visual interest to the most mundane scenes. Mehta's direction keeps us teetering between hope and despair before providing catharsis in an unexpected way. His final shot is haunting yet hopeful. "Siddharth" is the type of little film which can get lost in the shuffle, but it's well worth seeking out. It does what the really good movies do best - opens our eyes to the experiences of lives lived outside our own existence. Grade: