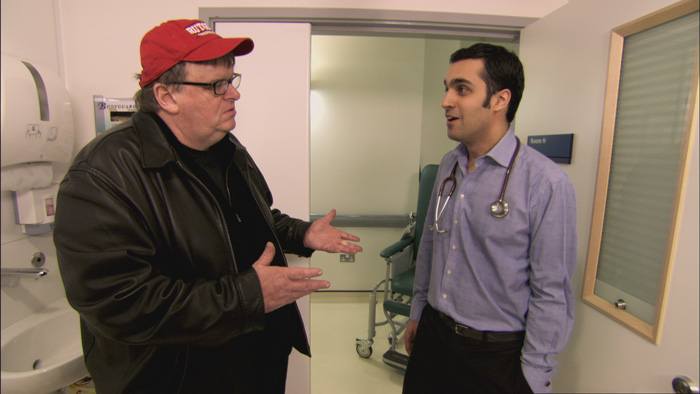 Uber documaker Michael Moore has taken on, in the past, General Motors in “Roger & Me,” violence in America in “Bowling for Columbine” and September 11 in Farenheit 9/11.” Now, the gloves come off once again as he turns his camera on the trillion dollar health care industry in America in “Sicko.”

Michael Moore must be reading his own reviews. After employing manipulative editing tricks, playing too fast and loose with the facts and staging scenes starring himself in his "Bowling for Columbine" and "Fahrenheit 9/11," Moore takes a more straightforward if none less impassioned approach to his latest subject - the state of U.S. Healthcare. Moore, who does not appear until almost an hour into his film, begins with narration as he recounts stories sad and absurd. He surprises us by informing us that "Sicko" is not a film for the 50 million uninsured, but for the 250 million Americans who actually have health care. What you see and hear will astound and anger you. "Sicko" also provides the historical context for how we find ourselves in this state, tracing the rise of the HMO to Richard Nixon's approval of the Edgar Kaiser business model - less care means higher profits. Once again, greed can be seen to be the root of all evil. And sure, Moore maybe plays a bit fast and loose with the benevolent coverage he gives to the national health care plans of England, Canada and France (my aunt in England waited 2.5 years for a cataract operation, for example), but surely they are still doing something that works far better than what the U.S. has, where people are turned away from receiving urgently needed treatment and literally dumped on the streets when they cannot pay their bills. Moore the showboater cannot keep from showing his true colors - he relates his 'anonymous' giving of $12K to the MooreWatch webmaster who was on the brink of closing down the site due to medical costs as if he is completely unaware of his own cat that ate the canary duplicity. A trip to Guantanamo to get health care for 9/11 workers shrieks of show biz, but his subsequent trip to Havana is truly moving. Too bad he chose a weak gag to wrap his film when he could so easily given a gut punch. If "Fahrenheit 9/11" didn't succeed in keeping Bush out of office for a second term, perhaps "Sicko" will put the health care crisis on a par with Iraq on the agendas of those seeking election in 2008.