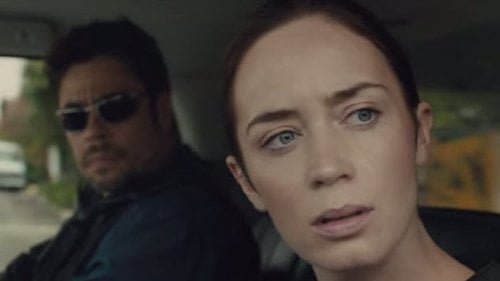 After Arizona FBI agent Kate Macer (Emily Blunt, "Edge of Tomorrow") leads a raid that uncovers a cartel death house, she's recruited to join a Black Ops mission under the leadership of shady Columbian operative Alejandro (Benicio Del Toro, "Traffic") who may or may not be un "Sicario."

Director Denis Villeneuve has shown a keen interest in moral ambiguity, violence and betrayal, especially among families, in such films as the terrific "Incendies" and lesser "Prisoners." In his latest, he uses the radiant purity of Emily Blunt's face as our POV into a charged scenario where she has little idea of what is going on. The film is stunningly shot by the great cinematographer Roger Deakins (2012's "True Grit," "Skyfall") who emphasizes vast, flat landscapes under a blazing sun, and effectively scored by Jóhann Jóhannsson ("Prisoners," "Foxcatcher"), who uses a thumping, reverberating moan to express misery and impending doom. But while these elements of the film are top notch, by the time we and Kate understand what the U.S. Government has orchestrated, it all seems somewhat shallow, even pretentious. The film has frequently been compared to Steven Soderbergh's "Traffic," (which also starred Del Toro and Brolin's father James), but that film is still the standard bearer in its dissection of the U.S. and Mexico's drug trade relationship. The film is at its best as Kate first joins the team, surprised to find herself on a private jet to El Paso with Matt reclining on a couch and the disturbing Alejandro startling himself from troubled sleep. But Kate's been misled, the group instead heading into the hellhole that is Juarez where kids play on streets festooned with mutilated hanging bodies and flyers seeking missing women. Kate's advised to stay alert and watch the state police as they're not always the good guys. Deakins has us looking out of car windows, like Kate, as a prisoner is transferred and the black fleet makes its way toward the Bridge of the Americas where it is caught in fourteen lanes of converging traffic. Two cars come under suspicion, a weapon is sighted and suddenly there is a gun fight amidst tourists and travelers, two carloads of Mexicans simply left for dead as the task force continues on its way with its astonished and horrified F.B.I. recruit. Screenwriter Taylor Sheridan would have us believe that Kate is chosen by the jocular and unconventional government task force official Matt Graver (Josh Brolin, "Everest") because she's a 'thumper,' one who goes in and gets the job done, while her partner, Reggie Wayne (Daniel Kaluuya, BBC's 'Skins,' "Kick-Ass 2"), is rejected because of his law degree. Yet Kate's got a 'by the book' reputation, something which will become an obvious hindrance, and Reggie never really goes away. Demands on Matt for information, which he enjoys withholding, eventually inform Kate that the prisoner, Guillermo (Edgar Arreola, "2 Guns"), is the brother of Manuel Diaz (Bernardo P. Saracino), the guy they want to use to lead them to cartel head Fausto Alarcon (Julio Cedillo, "The Mist") (and who it's implied is brutally gone over by Alejandro). Kate's boss Jennings (Victor Garber, "Titanic") advises her that 'the boundaries have moved,' so she agrees to stay on a mission that flouts U.S. law. Along the way she'll observe Alejandro compassionately address the latest roundup of undocumented immigrants for information and almost be killed by a man she believes is a good guy. When Matt informs her they're heading to a tunnel to 'create a diversion,' she sees something she was never meant to see. But after all the mysterious buildup, what eventually goes down isn't all that surprising or earth shattering except in its hair trigger execution, the filmmaking superior to the story it services. For all Blunt's believability, the actress can only do so much portraying a law abiding upholder of such faced with unscrupulous means. Del Toro is the intriguing character here, a man whose innate goodness has been corrupted by an unbearable need for vengeance. The relationship between the two is intended as a push-pull of light warring with dark, tender moments countered with ruthlessness, but it's all too black and white rather than the gray the film requires. Kaluuya has a breakout role as Kate's brotherly partner. As a Mexican cop whose home life is glimpsed along the way, Maximiliano Hernández ("Warrior") is a symbol of the cost of the drug war. "Sicario" illustrates the innate evil of the Mexican cartels more horrifically than "Traffic," indicative of their increasing power over the past fifteen years. But Villeneuve and Sheridan's focus on political moral ambiguity over the destruction of individual human lives just isn't as powerful. "Sicario" is a fine thriller that doesn't quite live up to its ambition. Grade: