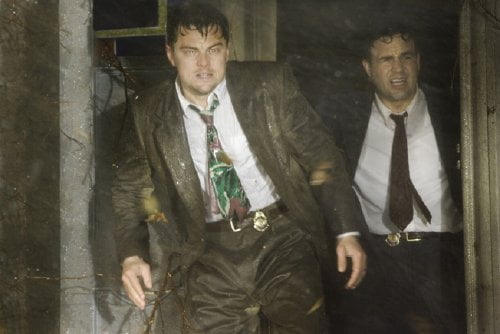 It is 1954 and US Marshal Teddy Daniels pushes for assignment to investigate the escape of an inmate from Boston’s Shutter Island Ashecliffe Hospital for the criminally insane. He and his partner, Chuck Aule (Mark Ruffalo), take the ferry to the island that is in lockdown while the guards search for the missing patient. However, things are not what they seem on “Shutter Island.”

On a private ferry in Boston Harbor Federal Marshall Teddy Daniels (Leonardo DiCaprio) admits to his brand new partner Chuck Aule (Mark Ruffalo) that he's been keeping an eye out for a case at Ashecliffe Hospital for the criminally insane because it houses the man who set the fire that killed his wife. When they arrive, Teddy is agitated when told by Deputy Warden McPherson (John Carroll Lynch) that they must surrender their weapons and further disturbed by a perceived coverup in the case of the missing patient he is investigating. As a hurricane bears down, Teddy, who suspects mind control experiments are occurring in a lighthouse, doesn't know who to trust on "Shutter Island." Martin Scorcese returns to Boston after his Oscar winning "The Departed" to helm the third Dennis Lehane ("Mystic River," "Gone Baby Gone") adaptation to grace the big screen, and, like Eastwood and Affleck before him, delivers a film that is superior to its pulpy source material with its unoriginal 'shocking twist.' In fact, many if not most should see what's coming - Scorcese even gives us a signpost very early on - but that doesn't detract from this funhouse mirror movie. The most basic flaw of "Shutter Island" is that once Scorcese reveals the truth, he dwells upon it so long he blunts its impact. Still, DiCaprio's performance is so intense he leaves us with an implication to dwell on in the film's final scene. Teddy and Chuck are brought to the office of Dr. Cawley (Ben Kingsley), who explains the case of the missing Rachel Solando, a woman who lost her husband to war and drowned her three children and who seemingly vanished from a locked room with a barred window. Cawley is an interesting character himself, a psychiatrist in 1954 who believes in more gentle care of patients, even criminal ones, and who questions the budding drug therapies of the time. Initially hidden from view is Dr. Naehring (Max von Sydow), a psychiatrist of another stripe who raises Teddy's distrust with his German accent. We have already witnessed Teddy's flashbacks to WWII, where he was one of the American soldiers who liberated the Dachau concentration camp and witnessed unspeakable horrors there. Then the Marshalls are taken to inspect Rachel's empty cell where Teddy finds a note hidden beneath a floor tile that speaks of 'the rule of 4' and asks 'who is the 67th?' Staff interviews do not prove very helpful, but when the duo begin speaking with patients who shared Rachel's last group therapy, one distracts Chuck in order to write a warning in Teddy's notebook. Rachel mysteriously reappears in bare feet and unharmed, then Teddy overhears senior staff discussion about the storm bearing down and learns the hospital's three wards (men's, women's, and the severely violent) contain 66 patients. He becomes convinced Laeddis (Elias Koteas), the firebug he has been unable to find, is that 67th patient. Paranoia begins to set in, confirmed with alarming detail by two people he never expected to find, and when his partner disappears, Teddy is convinced Chuck has become an experimental subject in the guarded and difficult to get to lighthouse. "Shutter Island" is Scorcese's "Spellbound" by way of classic locked door murder mysteries and every Gothic mansion lashed by rain and shadowy tree branches. There are hints and clues sprinkled throughout "Shutter Island" for those paying careful attention for incongruous details, subtle character behaviors and ambiguous dialogue. Laeta Kalogridis ("Night Watch," "Alexander") has done a fine job adapting Lehane's novel, which is stuffed to the gills with switchbacks, multi-layered conspiracies and mutated memories. Cinematographer Robert Richardson ("Inglourious Basterds") does superb work, investing the film with mood and psychological angles (although Polanski's "Rosemary's Baby" remains unbeaten for conjuring paranoia), all craftily combined by Scorcese's long time editor Thelma Schoonmaker, at least until the truth surfaces. Visual effects range from the subtle (a white mark on some rocks which Daniels mistakes for a fallen body) to the fake (dead bodies at Dachau). Period costuming (Oscar winner Sandy Powell) and makeup lend the film more noir flavor, even in daylight and in color. Dante Ferretti's production design, utilizing locations at Massachusetts' Peddocks Island and Medfield State Hospital, is so close to the novel's descriptionss I expected to see a page turning on screen. As identity and real and imagined realities are all part of the story, the cast is almost comprised of teams of sorts - opposite and complimentary players. DiCaprio is very good here, using a mixture of investigative wile and cynicism, his focus cut by a series of blinding migraines. He is alternately called upon to be suspicious, swaggering, terrified and tortured and one can see the continued maturation of this formerly baby-faced actor, now convincing as a hard-boiled period character. Ruffalo is also excellent as his more subtle counterpart, a well balanced act, just as Kinglsey's forward thinking is measured by von Sydow's Teutonic traditionalist and Carroll Lynch's basic friendliness is countered by Ted Levine's more sinister Warden. Michelle Williams brings a poignant vulnerability to Teddy's deceased wife Dolores where Emily Mortimer is equally fragile if more highly pitched as the insane, delusional Rachel. Two almost ghost-like presences are portrayed by Jackie Earle Haley, an unexpected find in Ward C who begins to give credence to Teddy's theories and, best of all in her down to earth delivery amidst all the lunacy, Patricia Clarkson as the one who fully credits them. In paying homage to the B-Movie, Scorcese goes overboard with the music mix at film's beginning, just as less would have been more at the film's climax. Sure the material is pulpy and Gothic, but some restraint would have elevated it. Nonetheless, Scorcese's exuberant embrace makes for a mostly giddy viewing experience and "Shutter Island" is the type of movie that may grow in esteem with repeat viewings.

As the Marshals get on with their investigation, they are hampered by the hospital’s higher ups – Dr. Cawley (Ben Kingsley) and the sinister Dr. Naehring (Max Von Sydow) – and stopped from seeing the files they need. The plot thickens as a giant storm of hurricane proportions descends upon the isolated island, cutting all communication to the outside world and Teddy believes that he has stumbled on a cover up of a deadly scandal. Complicating things for the young cop, Daniels is plagued by nightmares of his dead wife, Dolores (Michelle Williams), killed by an arsonist now residing at Ashecliffe. Is Teddy there to investigate a patient escaping or does he have murderous revenge in mind? Leo DiCaprio is in top form as the conflicted Teddy and stands out in an outstanding cast. He is a great actor and transitioned from the “kid” to a thespian of international stature. His Teddy is fighting demons and grief while trying to get to the bottom of his suspicions about the sinister on goings at the asylum. I will say no more about the plot because the fun is in the twists, turns, and thrills. He is in the company of such notable actors as Sir Ben K., Von Sydow, Ruffalo, Williams, Emily Mortimer, Patricia Clarkson, Jackie Earle Haley, Ted Levine, John Carroll Lynch and Elias Koteas. All give dimension to their various characters but it is Leo’s show. Techs are first-class. Master lenser Robert Richardson (go on imdb.com and check out his filmography) does a superior job in capturing the doom and gloom atmosphere of the sinister prison/hospital. Dante Ferreti creates the period feel and menace of the island and Sandy Powell is right on the money with her accurate 50’s costuming. The rest of the behind the camera work is of equal high quality. After all, it is a Marty Scorsese film, right? I have not read the Dennis Lehane novel on which “Shutter Island” is based, so I rate the movie on its own merits. Director Martin Scorsese and scripter Laeta Kalogridis have put together a dark and suspenseful thriller that keeps you on the edge of your seat – most of the time. The last third, though, takes too long to wrap things up, making this a good, not great, mystery thriller. I checked the time frequently during the dragging finale, something I would never do with a great film. That is why