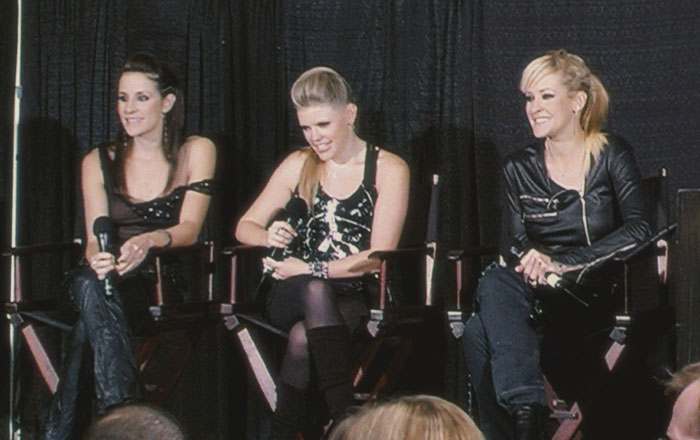 In 2003, the Dixie Chicks were the top selling female artists of all time and the darlings of country music, but when they kicked off their tour in London that year, a city which had just drawn out a million protesters of the Iraq War, lead singer Natalie Maines told the crowd that she was ashamed George Bush was from her home state of Texas. The U.S. media picked up on the reported comment and a firestorm of negative backlash saw the Chicks' number one single slide down the charts and country music radio ban their music. Directors Barbara Kopple ("Harlan Country, U.S.A.," "Wild Man Blues") and Cecilia Peck chart the three ensuing years in "Shut Up & Sing." The chicks aren't such a famous band, someone notes, that people know their individual names - like the Beatles - yet Maines' off the cuff comment, enthusiastically received in its time and place, has reverberations that echo John Lennon's 'Jesus' comment of decades past. Haven't we learned anything in forty years? Like the Beatles' experience, the Chicks explain themselves over and over while the speaker remains defiant. Right wingers in southern states burn their music and radio stations ban them. The Beatles stopped touring in the wake of death threats, and sure enough, Natalie Maines receives a credible warning that she will be shot during a concert in Dallas - a concert that the Chicks go forward with. "Shut Up & Sing" cruises backwards and forwards, charting the Chicks daily lives. Banjoist Emily Robinson lives with her rancher husband. Both Martie and Natalie are married to actors - Martie living in Austin, Natalie with Adrian Pasdar in L.A. We learn how the current group formed (steel guitarist Lloyd Maines, Natalie's dad, left an audition tape of his daughter singing with the previous incarnation), and how they chart their course with manager Simon Renshaw (who testified at a congressional hearing that Cumulus Broadcasting had thumbed its nose at the First Amendment). Natalie's feisty refusal to 'make nice' is exemplified when she hears Bush's reaction to her statement ('They shouldn't have their feelings hurt just because some people don't want to buy their records when they speak out') - she looks at the camera and calls him 'a dumb f*&K.' That same spirit comes to the fore in a reaction to a Tobey Keith diss - and starts a war of 'FUTK' tees against 'FUDC' shirts (Maines gleefully cackles post-concert that she was tempted to ask an FUDC wearer what he had against Dick Cheney). Kopple and Peck's film create three distinct impressions. Firstly, that freedom of speech is a freedom worth fighting for, an irony given the war the Chicks speak out against. They weren't the only entertainers to feel the suppression of freedoms Bush's war against terrorism wrought, but three years' events prove vindicating. Secondly, the Chicks are a tightly knit sisterhood, a hugely refreshing portrait when female infighting is so often what's reported. Fiddler Martie Maguire actually breaks down in tears at the thought that Maines may still be feeling guilt over the effect her remarks have had on their career. These woman don't only share a career, but motherhood, their recording sessions a 'village' of child rearing. Lastly, another irony. In 2006, the Chicks release an album that veers outside their country roots while commenting - strongly - on their post-remark experience. They go on tour to find their U.S. audiences dwindling. Yet this documentary may be just the thing to find them a new audience. This non-Country fan was surprised by how much she enjoyed their music.