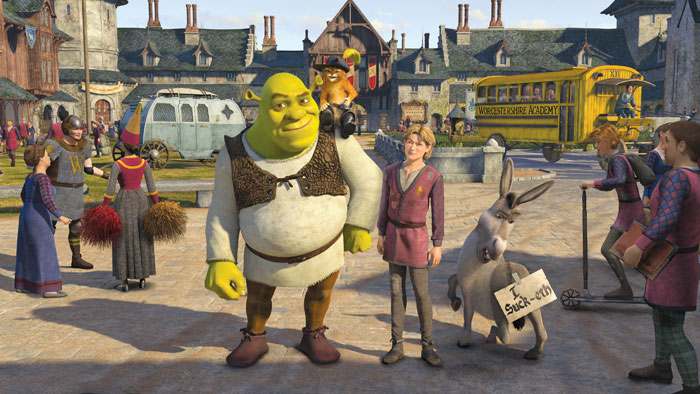 Shrek never had royal ambitions when he married Princess Fiona, but when his father-in-law King Harold passes away, Shrek must find a suitable candidate for the throne and keep it safe from inappropriate usurpers or take the job on himself as "Shrek the Third."

Although the "Shrek" franchise has just about lost that irreverent subverting of popular culture which made the first so unique, there is still fun to be had with these characters and the third is a step up from the second. Princess Fiona (Cameron Diaz), who was all but absent from the second outing, gets her own female empowerment strand in the third, and she's aided by her baby shower guests when they happen to be in the wrong place during Charming's second attempt to regain the throne. With King Harold (John Cleese) on his deathbed, Shrek and Fiona are called upon for royal duty which Shrek (Mike Myers) clearly is not cut out for (his knighting attempt takes the obvious route, but a ship christening debacle and appearance at court are far more lively). When the Frog King croaks (and the scene is both funny and affecting), Shrek sets forth with Donkey (Eddie Murphy) and Puss (Antonio Banderas) to find Fiona's cousin Artie (Justin Timberlake, last appearing in parody on Fiona's childhood bedroom wall, here appearing after the Diaz romance has gone bust) to ascend the throne. He's also beset with nightmares, having learned that Fiona is pregnant. Meanwhile Charming, having sunk to being booed at dinner theaters, rallies villains like Captain Hook (Ian McShane, HBO's "Deadwood"), Rumplestiltskin and the Evil Queen to join his coup attempt on Far Far Away. As Shrek journeys back, having plucked Artie from Worcestershire High and run across its post-breakdown magic professor Merlin (Eric Idle), Charming's minions threaten the likes of the Gingerbread Man to discover the whereabouts of the royals. Queen Lillian (Julie Andrews) and Fiona's baby shower guests, Cinderella (Amy Sedaris), Sleeping Beauty (Cheri Oteri), Snow White (Amy Poehler), Rapunzel (Maya Rudolph) and former evil stepsister Mabel (Regis Philbin), go underground in the castle to effect a double pronged attack when Shrek's merry band returns. And it's this latter thread that affords the film's biggest laughs. Shrek and company's foray into high school politics lacks real bite (Artie is bullied by Lancelot (John Krasinski), cheerleaders talk like Medieval valley girls) and with the exception of his knee sock/Birkenstock footwear, Merlin's a dud. The filmmakers do little with Merlin's body reversal botch up of Donkey and Puss, although one must marvel at the technical artistry of the rendering of their wet fur after a dunk in the sea. Back at Far Far Away, though, we're treated to Pinocchio treading the minefield of interrogation without his nose giving him away and the Gingerbread Man seeing his life flash in front of his eyes. The band of babes is fun as well, with Beauty drifting off in tense moments and Snow White turning her woodland birdies into something more Hitchcockian. It all ends predictably with the arrival of little Ogre feet, their bodily gases crossing paths with Donkey's dragon-bred, fire-breathing bunch. "Shrek the Third" is far more engaging than "Shrek 2," but ultimately not much more memorable. It's those fine supporting character moments that occasionally make it soar.