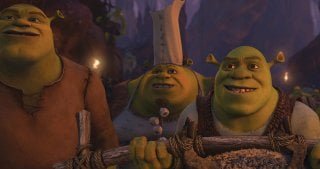 Shrek (Mike Meyers) is a domesticated ogre. Once, he was the terror of the land, challenging dragons, chasing vengeful villagers and saving his wife, Fiona’s (Cameron Diaz), mother and father’s kingdom of Far, Far Away. Now, he has triplets to contend with, the day to day chores of family life and a need to go back to his old, fun roots. He makes a deal with the notorious Rumplestiltskin (Walt Dohrn) to trade one day of his life for just one more day as his old self in “Shrek: Forever After.”

This fourth installment in the Shrek franchise (and I hope it is the last) brings things full circle for our lovable giant green ogre and his family and friends. For Shrek, though, domestic bliss becomes domestic hell and, against all advice, he makes a deal with sneaky Rumplestiltskin to trade days. Things start out well enough as he finds his ogre’s roar once again and he does what he does best – scare villagers. However, he did not read the fine print of his contract – something you never do when dealing with Rumplestiltskin – and he finds out that he gave up the wrong day, jeopardizing his life with Fiona and the kids, Donkey (Eddie Murphy), Puss n’ Boots (Antonio Banderas) and the rest. Director Mike Mitchell makes his 3D animated feature debut, utilizing a script by Josh Klausner and Darren Lemke, and takes the franchise up a notch from the lame “Shrek the Third,” though not a hard thing to do. Using 3D for the first time in the series, Mitchell and his team take the familiar and twist it a bit. Shrek’s decision forces dire results as, in the alternate universe he has been duped to enter; all he has known has changed – for the worse. “Shrek Forever After” is the battle to get his life, wife and family back. “Shrek 4” is, at its heart a “be careful what you wish for, you might get it” story, something that has been done many times before – remember “It’s a Wonderful Life”? The writers twist the lovable ogre’s world around and, like George Bailey; he sees the horrible consequences of his selfish decision to be Ogre for a Day. Of course, the movie is about Shrek getting his life back and the trials and tribulations of that quest. Along the way, Shrek meets Fiona, Donkey and Puss ‘n Boots and is shocked to learn they do not know him. Not only that, everyone is hostile toward him. The tale of getting his life back plods along as Shrek sees what would happen if he did not exist. To me, worst of all, is what happened to Puss. This previously sleek heroic feline, in the alternate world, is a fat cat who would rather eat than fight. Puss gets some of the film’s funniest lines. In the current 3D-enamored world, we have seen some very slick, vivid use of the technology in “How to Train Your Dragon” and “Cloudy with a Chance of Meatballs.” We have also seen how shoddy it can be with the horrendous “Clash of the Titans.” “Shrek Forever After” falls in the middle of the range. The 3D is well done but the overall look of the film is dark and murky, like they put the wrong wattage bulb in the projector. I saw it in RealD and hope the Imax version is brighter. While I really enjoyed the original “Shrek,” the follow ups have given diminishing returns, story wise at least. The latest in the franchise is better than its predecessors, mainly because of the 3D, but should (please gods) be the last.