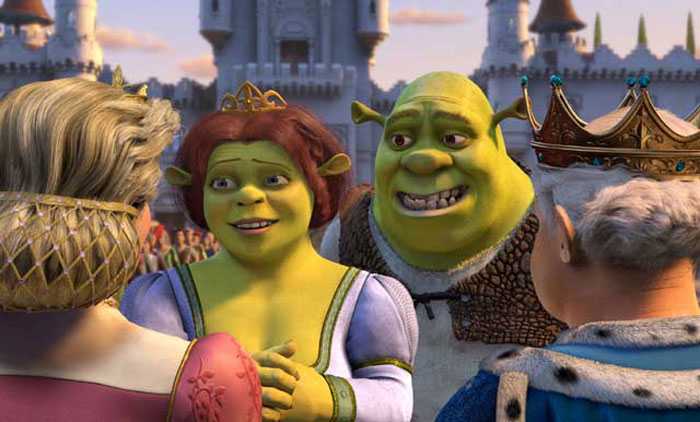 What's next after a happily ever after honeymoon? A visit with the in-laws, the king (John Cleese) and queen (Julie Andrews) of the Kingdom of Far Far Away present more obstacles for the ogreish love affair of Princess Fiona (Cameron Diaz) and her new husband, "Shrek 2."

More of the same with less bite, "Shrek 2" continues to plunder other films while introducing product placement and five major new characters who, with one exception, add little to the proceedings. When it comes to sequels, Dreamworks Animation is no Pixar. That's not to say there aren't pleasures to be had in "Shrek 2," but most of them arrive at the film's conclusion long after one has begun checking one's watch. The film begins with a prologue which explains that Prince Charming (Rupert Everett, "My Best Friend's Wedding") had been Fiona's intended all along, but he arrived at the tower too late, well after Shrek and donkey had braved the dragon and saved the princess. Meanwhile, the newlyweds have arrived back at the swamp only to be summoned for a ball celebrating their marriage by Fiona's parents, who are clearly expecting her to arrive with Charming. Surprisingly, Shrek doesn't have mother-in-law problems - she's actually supportive - but father-in-law is enraged and wants rid of his ogreish son-in-law, so he heads to the Poison Apple pub to hire the notorious hit man, Puss-in-Boots (Antonio Banderas, "Spy Kids 3"). It turns out that the king has a secret pact with The Fairy Godmother (Jennifer Saunders, TV's "Absolutely Fabulous"), who happens to be Charming's mom. Meanwhile, Shrek foils Puss, who becomes his loyal servant, and steals one of the Godmother's potent potions to ensure he and Fiona will live happily ever after. Surprising results end up pitting Shrek against Charming for Fiona's hand. As in the original film, the story writers have fun spoofing films like "The Lord of the Rings," "Spider-Man," "From Here to Eternity" and, most successfully, "Mission Impossible." The first film's main problem is also present in the sequel, though - a feeling of warmed over borrowings from "The Princess Bride" joined this time with echoes of Pixar's "Monsters, Inc." Farquaad's Disneyland kingdom is replaced with the Hollywood styled Far Far Away with its stretch-carriages and hillside sign (not to mention Barney's Old York, Gap Queen and Old Navery). Speaking of Farquaad, the great John Cleese cannot enliven the King and Julie Andrews is nondescript as the Queen. Jennifer Saunders gives a jaunty vocal performance to a character that simply isn't enjoyable enough for the large amount of screen time she's given. Everett breezes through his egotistical prince impersonation, but the real addition is Banderas's Puss, an amusingly animated creation who gets some of the film's biggest laughs (one really rather naughty visual reference to self-stimulation will more than likely fly over the heads of the kiddies). In smaller roles, the denizens of the shady pub, the Poison Apple, are all entertaining from the Ugly Stepsister who tends bar to patrons like the Headless Horseman and the piano-playing Captain Hook. It should be noted that Fiona is pretty much relegated to the sidelines for this outing, although the filmmakers have done a nice job presenting the weirdness of a new husband staying in his bride's girlhood bedroom (the "Sir Justin" poster pinned to her canopy is a cute in-joke). "Shrek 2" finally revs into high gear for its race-to-the-finish ending, which gleefully spoofs both the O.J. Simpson chase and TV's 'Cops,' although the climax once again is reminiscent of Disney's "Beauty and the Beast." The concluding musical number isn't as much fan as the original's, even with Puss joining Donkey on vocals, but stick around for a semi-amusing epilogue which follows the credits.

Following their fairytale honeymoon, newly-weds Shrek (Mike Myers) and Princess Fiona (Cameron Diaz) return to his beloved swamp and the contented couple settles into their happily-ever-after life. That is, until Fiona’s parents, King Harold (John Cleese) and Queen Lillian (Julie Andrews), invite them for a little visit to their homey castle. The reluctant ogre agrees to go but he senses there are in-law troubles brewing in “Shrek 2.” The makers of the sequel to the incredibly successful 2001 original, “Shrek,” have skirted the fairytale adventure of the first film in favor of a much more routine situation comedy style story that delves more into slapstick than imagination. Shrek, a character noted for his sullen cynicism and caustic wit, has become domesticated by his marriage to loving Fiona. Sadly, this taming of the beast causes the edgy, dark humor of the first to be usurped by a TV-style sitcom – at times I almost expected canned laughter in the background. The story, by Joe Stillman, J. David Stem & David N. Weiss, is father-in-law versus son-in-law battle of wills that is embellished with intrigue by Fairy Godmother (Jennifer Saunders), who appears to be a kindly soul until you understand that the emphasis is on GOD-mother and not Fairy. Her burly bodyguards are also a giveaway to her shady hidden agenda as she uses blackmail to set up her son, Prince Charming (Rupert Everett), to take over the kingdom of Far Far Away by marrying Fiona. Fairy Godmother, owner of a huge potions and spell plant (looking a bit like the scare factory in “Monsters, Inc.”), has ambitious plans and isn’t going to let some ogre stand in her way. There is also a plot revolving around a hit man, or should I say hit cat, Puss in Boots (Antonio Banderas), hired by the king to do Shrek in. “Shrek 2” is a slick production and makes leaps in the computer-animation field over the original. The nuance of detail, textures and movement are blended seamlessly making the CGI palette a further challenge to traditional 2D animation. The makers couple this good look with clever spoofing and reference to a multitude of subjects, films, cultural icons and more - The Lord of the Rings ring; Spiderman; Hawaii-5-O; Hollywood and the HOLLYWOOD sign; Disneyland; Fast food (Friar’s Fat Boy); Justin Timberlake; Monsters, Inc.; Raiders of the Lost Ark; Wizard of Oz; Barney’s of New York; Alien; the punchline to the “A horse goes into a bar…” joke; old gangster movies; Mission Impossible (the movie); Rodeo Drive; and, all manner of fairytales. The triumvirate of vocal talents, as expected, is back for this second installment of what may drag on into a series (I, personally, have had enough of the Ogre Tales – there can be too much of a good thing). Mike Myers puts his Scottish burr onto the title character but it feels lackluster when compared to the first. The story moves away from Shrek and Fiona, reducing their dimension in the overall story. Cameron Diaz and Eddie Murphy reprise their characters of the Princess and Donkey, also without much added from the first, though Murphy always gives an enthusiastic performance to his vocal characters. The vocal talents of the supporting cast fit the bill but the new additions fail to fill the boots of John Lithgow’s outrageously bellicose Lord Farquar. John Cleese is a disappointment as King Harold, although this may be a product of his animated stature. I had a problem with Cleese’s long, gangly persona shoehorned into the diminutive king. Julie Andrews does yeoman’s work but is saddled with being little more than the understanding mom figure. Rupert Everett is bland as the charmless Prince Charming. Antonio Banderas does get some mileage as the suave gunsel, Puss in Boots, who has a change of heart. The cleverness of “Shrek 2” carries a manufactured feel, rather than crafted, missing the spontaneity of the first. Some might say that this is harsh criticism of the sequel; that it is near impossible for the follow up to better the first. This is mostly true but there are exceptions – “Toy Story 2” is, at the very least, the equal of its source and proved that imagination can infuse originality into a sequel. I had hopes that “Shrek 2” would achieve this same level of excellence but got good instead of great. It is highly entertaining with some laugh-out-loud moments and lots of giggles.