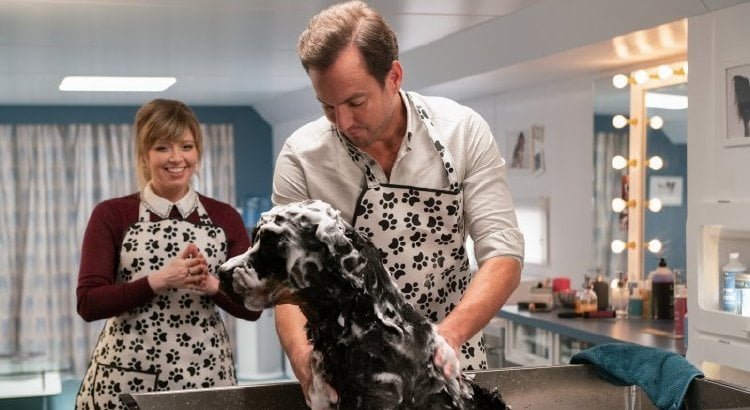 Rottweiler Max (voice of Ludacris ), a member of the NYPD K9 unit, stakes out a pier hoping to take down smugglers looking to sell baby panda Ling-Li, but when he attacks their getaway driver, he outs undercover FBI Agent Frank Mosley (Will Arnett). Mosley's none too happy, but Max corners one member of the gang in an alley, learning that Ling-Li is to be sold at the Canini Invitational Dog Show at Caesar’s Palace. And so the FBI Agent and the NYPD dog head to Vegas as undercover competitors, neither knowing anything about "Show Dogs."

One hoped this movie 'from the people who brought you "Beverly Hills Chihuahua"' might play something like "Best in Show" from the dogs' perspective crossed with "Turner and Hooch," but while the latter film is referenced as a running gag, this one makes "Chihuahua" look like a masterpiece. Working from a banal script by Max Botkin and Marc Hyman, director Raja Gosnell has wasted the talents of some incredible dogs and their trainers in a movie that can only be described as mind numbing. The mismatched buddy pairing pull into Vegas fighting over the radio and things go downhill from there, Max running off when Frank stops the car. The FBI’s special canine consultant Mattie Smith (Natasha Lyonne), a dog groomer expecting Frank and Max, is none too impressed when Frank asks to 'rent' a dog instead. Max is two steps ahead of him, having broken into Clark County's animal rescue facility and freed French Papillion Philippe (voice of Stanley Tucci), a three time Best in Show winner fallen on hard times, to coach him. When Max and Philippe arrive at opening night festivities, they are reunited with Frank and Mattie just in time for Philippe to swap insults with reigning champ Dante (voice of Alan Cumming), a demanding Yorkie trained by the same guy who abandoned Philippe. The next day, Frank amuses himself prepping Max with bathing and bikini waxing, but the bowlegged Rottweiler surprises everyone by winning his breed (unbeknownst to the humans, who do not hear the dogs speaking, Max has psyched out the competition by figuring out they are all related, resulting in disqualifying pandemonium). At another party that evening, Max sniffs out the lavender scented Wet Naps that pinpoint the smuggling mastermind, a client and friend of Mattie's who is also planning on absconding with Canini's Best in Show. There is a budding romance for Max in Australian Shepherd Daisy (voice of Jordin Sparks), a crime fighting recruit in enthusiastic Pug Sprinkles (voice of Gabriel Iglesias) and three witless pigeons who fly from NYC to give Max 'eyes in the air.' Shaquille O'Neal voices a Komondor named Karma and RuPaul is Persephone, one very weird looking dog. The CGI used to make the animals' mouths move is passable, but other instances are crude, a tiger's reference to "Life of Pi" only calling attention to how unconvincing he is in comparison, action CGI cartoonish looking. Small children may be entertained, although the ones at the screening I attended were awfully quiet. One can only imagine Arnett and Lyonne must be dog lovers to have signed up for this, but so am I and I was checking my watch every ten minutes. "Show Dogs" is only fit for the pooper scooper. Grade: