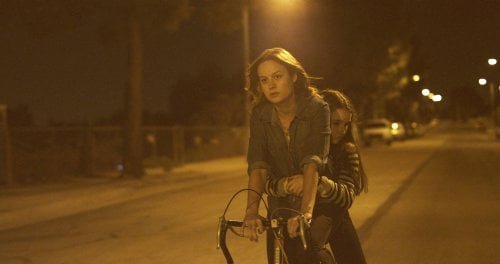 Mason (John Gallagher Jr., HBO's 'The Newsroom') likes to tell newbie line workers at their facility for at-risk teens the infamous story of how his supervisor Grace (Brie Larson, "The Spectacular Now”) gave him 'gate duty' on his first day only to be helpless when the biggest, baddest kid in their teen center walked right past. It has an embarrassingly comical ending when Mason tells it, but the reality is a lot more tragic. Mason will learn first hand how much Grace, now his fiancee, has gone through when she sees herself reflected in the latest kid, Jayden (Kaitlyn Dever, "The Spectacular Now"), to be admitted to "Short Term 12."

Writer/director Destin Daniel Cretton adapts his 2009 Sundance Film Festival U.S. Jury Prize winning short to feature length and delivers the type of outstanding independent work the festival used to be known for back in the day. Featuring a big breakout performance from Brie Larson (we're talking potential Best Actress nomination potential), this film uses humor, sensitivity and counseling insights to present difficult subject matter with hope for the future. When her boss Jack (Frantz Turner) informs Grace that a friend of a friend's daughter will be joining them, he asks her to keep an eye out and Jayden immediately makes a negative impression on both the other kids and returns Grace's reaching out gestures with attitude. Grace is a dynamo, unrelenting in her love and support for the kids in her care. She and Mason have a beautiful relationship they keep under wraps at work, although most know anyway. Their shared in jokes and sense of humor helps cut through the daily tensions of their jobs. But there's always something a little held back about Grace, who travels to work separately on her bike, and we can see this troubles Mason who jokingly refers to her bike as his rival. When Grace discovers she's pregnant, she immediately makes an appointment to terminate and doesn't confide in the father. Her wall goes up even higher when Mason takes a call and tells her her own father's getting out of prison in a week. Cretton packs a whole lot more into 96 minutes, but it never feels rushed, each action and conversation propelling the story forward. And he uses stories within his story as means of confessions - Grace tells Jayden more personal history than she should and is rewarded with the children's tale about an octopus and a shark Jayden has written that tells Grace everything she needs to know; Mason tries to deal with Marcus (Keith Stanfield), a seventeen year-old dreading his upcoming birthday release whose lost his confidant in a fish called Nas, and gets invited to partake in revelatory rap. The legalities of foster care and the limitations of the line staff (who are not the kids' therapists) are worked in organically - new guy Nate (Rami Malek, "The Master") turns a serendipitous find into a surreptitious act of kindness while Grace puts not only her job but her personal freedom on the line. We also see how children of abuse often naturally fall into jobs helping others like them, not only in Grace's case, but in Mason's, who, along with a houseful of others, celebrates the wedding anniversary of the Latino couple who made such a difference as foster parents. The digitally shot film has a washed out look which oddly suits the material - these kids and the people who help them are not about fancy clothes or nice living arrangements, but tough love and compassion and the creativity which allows unspeakable truths to be expressed. There is joy in the simple chanting and clapping game of Big Booty or the crafting of birthday cards for someone who's experienced bitter disappointment and none of this needs visual embellishment. Larson, who just won the Best Actress award at the Locarno Film Festival for this role, creates the kind of character who has compassion for everyone but herself, frustrating the one she cares about the most and Gallagher Jr. is unrecognizable here from his Sorkin-spouting character on 'Newsroom,' in another breakout bit of acting. The entire cast, including newcomer Alex Calloway, comes together under Cretton's direction to immerse us in this heartbreaking yet hopeful world. "Short Term 12" is a small yet significant miracle.