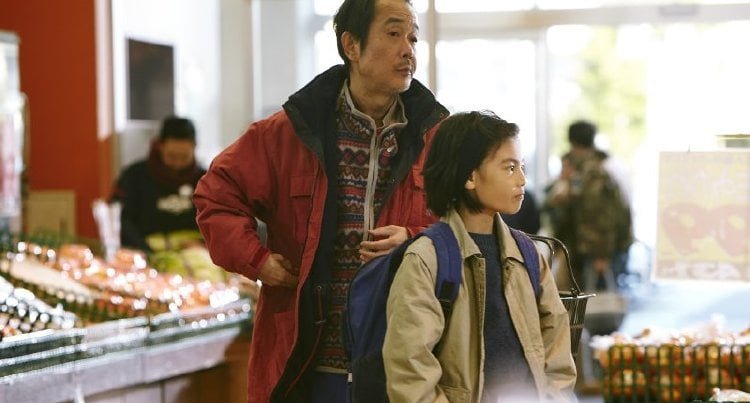 In a Tokyo grocery story, the head of the Shibata family (Lily Franky) signals to his son Shota (Jyo Kairi). While one runs a blocking distraction, the other appropriates goods to feed the family, waiting back in the cramped quarters of grandmother Hatsue's (the late Kirin Kiki) house. On their way home, they will also acquire a new member of the family, Yuri (Miyu Sasaki), an abused little girl left out in the cold. But the skill that supports the loving Shibatas will also prove their undoing. They are "Shoplifters."

Japan's writer/director Hirokazu Kore-eda is often compared to Ozu because of his extraordinarily delicate touch in bringing family dynamics and their emotional undercurrents to the screen. After a detour into the courtroom drama earlier this year with "The Third Murder," which nonetheless revealed itself to again be about the complexities of family, he goes back to his roots with his Palme d'Or winner, which in many ways reflects back to 2004's "Nobody Knows."

That film was based on a true story about children abandoned by their young mother trying to fend for themselves, hidden in cramped quarters. It was both beautiful and heartbreaking. As is this one. Here the mother is Nobuyo (Ando Sakura). She's relentlessly cheerful and loving, her optimism sometimes misplaced. When it is broached that in keeping Yuri they are guilty of kidnapping, Nobuyo, who overheard enough of the five year-old's parents' fighting to determine the nature of her life with them, responds that they are not keeping her from leaving nor have they demanded a ransom. When Shota exhibits jealousy because of the attention showered on Yuri, yet Yuri nonetheless worries when he's late to return one day, Nobuyo wonders aloud, astonished that this abused girl is not more 'like them,' but instead cares about others. Nobuyo's lack of self awareness makes us love her all the more.

As does her joking tough love. Osamu is injured at his construction job, and Nobuya, later learning that he will receive no workers' compensation, informs him she's wasted her 'niceness' on him. But the love between them is readily apparent, if unorthodox. When Yuri's story is featured on TV, a scandal because her disappearance was never reported by her parents, the Shibatas cut her hair, burn her original clothes and begin calling her Lin. Grandma picks out choice morsels, like the gluten cakes Yuri favors, for the girl who has truly become one of a family who, it seems, is constantly eating. Grandma is also a pragmatist, amazed rather than angered when eldest granddaughter Aki (Mayu Matsuoka) informs her about her job 'showing side-boob.'

But there is something Kore-eda has hinted at that is fully revealed in his third act, right after a perfect family outing at the seaside. A member of the family is cornered by shopkeepers and that crime's exposure opens the floodgates. Kore-eda puts us through the anguish of watching a family separated in a number of ways, his aim clear. This filmmaker creates empathy in order to question society.

Kore-eda's used the camera artfully here, keeping close watch on his pitch perfect ensemble. In one glorious moment, an overhead shot observes the family grouping down below, looking upwards at the fireworks we cannot see. He groups them all together, out in the open, right before separating them back into enclosed spaces, Osamu and Nobuyo giving direct camera addresses, Yuri left to her own devices, Shota's last spoken word devastatingly heard only by us.

"Shoplifters" conveys the messy, boisterous joy of three generations sharing and caring in close quarters and the ofttimes harsh residuals of justice. Grade: