Shoplifters of the World 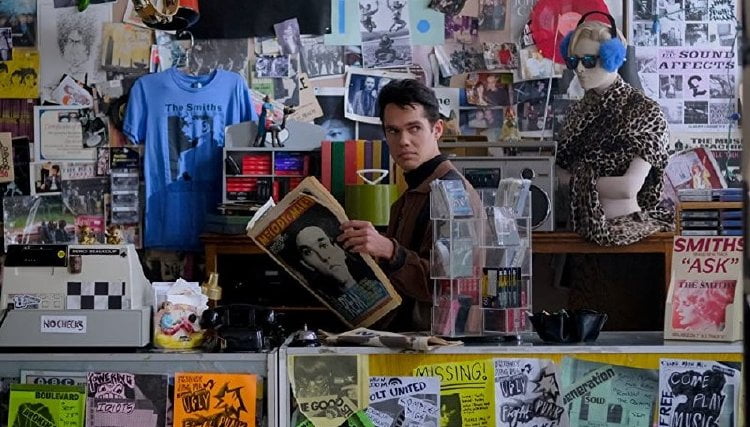 After dropping into her local record store to pick up a gift for Billy (Nick Krause, "The Descendants," "Boyhood") to mark his last night in Denver, Cleo ("Madeline's Madeline's" Helena Howard) returns home to the devastating news from MTV that The Smiths have just broken up.  Cleo had planned getting together with friends to get Billy so drunk, he’d forget joining the Army.  She’s delighted when her evening gets an unexpected soundtrack from the record store clerk, Dean ("Boyhood's" Ellar Coltrane), who’s long crushed on her, when he takes KISS 101 FM DJ Full Metal Mickey (coproducer Joe Manganiello, HBO's 'True Blood') hostage and forces him to play nothing but Smiths songs like “Shoplifters of the World.”

Although his characters are a few years older, cowriter (with Lorianne Hall)/director Stephen Kijak ("We are X," "Sid & Judy") uses the ‘last night of high school’ template for his tale of relationships unraveling, mutating and forging one consequential evening in 1987.  Based on a Details magazine interview with Morrissey, which itself references Mark Simpson’s book ‘Saint Morrissey,’ the story that has been bandied about for years as true probably isn’t, as it was never reported in a Denver newspaper nor is the name of the purported hijacker known (the story also reputedly inspired the Adam Sandler movie “Airheads”).  The long delayed production, which has been cast and recast multiple times over the years, errs on the side of Smiths fandom, its use of archival interviews and videos to comment upon the fictional action a little cringey, as are many of the film’s 80’s references.  On the plus side, cast MVP Manganiello, whose character is indeed real, became a producer and secured the rights to 20 Smiths songs for the film.

We meet Patrick (James Bloor) applying his eyeliner, which his girlfriend Sheila (Elena Kampouris, "Before I Fall") refers to as his ‘gay librarian’ look.  He protests that Robert Smith is not gay and she relents, although she has grown quite frustrated with his Morrissey inspired ‘no meat, no sex’ stance.  It’s fairly easy to figure out where this relationship is headed.  They join up with Cleo and Billy to head to a bar where they’ll meet Sandi (Olivia Luccardi, "It Follows") and Rita (Imani Lewis) and discover what Dean’s doing over the airwaves. The whole gang head to a house party Patrick’s not enthused about because it is likely to be filled with jocks.  As Cleo disparages musical selections from Bon Jovi, Bryan Adams and Michael Bolton (‘he’s playing at Red Rocks next week!), Patrick mopes as Sheila hooks up with a jock (later she’ll note Patrick on the dance floor with a man).  Billy fends off Siouxsie Chu (Celia Au), claiming he only went out with her for a month and all she wanted to do was watch “Liquid Sky” and listen to Bauhaus in the dark when biting on his neck.

The far more interesting part of the film takes place at the radio station where Dean directs Full Metal Mickey’s playlist at gunpoint.  Mickey’s aching to play some new Dokken, incensed when Dean blows away his mug bearing Paul Stanley’s mug and cannot fathom why anyone would write a song called ‘This Charming Man,’ yet over the course of the evening he begins to get it, wrapping with an over-the-air Smiths appreciation piece while playing cupid by dedicating ‘How Soon Is Now’ to ‘that special shoplifter out there’ for Dean.

Kijak fails to achieve a smooth flow for his film, which plays like a series of episodes punctuated by Dean and Mickey’s ongoing discussion and copious video montages.  Cleo’s utterly un-self aware analysis of “Pretty in Pink” is a highlight.  Acting fluctuates among the ensemble, some, like Howard, making strong impressions while others, like Krause, seem out of place.   Manganiello, sporting a long ponytail, is the film’s secret comic weapon, his good-natured outrage mellowing into appreciation.  Everyone here is defined by their musical taste, but only the metal head is willing to bridge the divide.  The production is average, Troy and Colonie, NY standing in for a Denver with no Rocky Mountains.  The film also features Thomas Lennon (TV's 'Reno 911!') as Dean’s Uncle Dick, his exasperated employer, and Kevin Aviance as Amazing Grace, the Grace Jones inspired club bouncer who slays his one line.

The best thing about “Shoplifters of the World” is its soundtrack, but despite the film’s flaws it has an endearing quality.

Set in Denver 1987, “Shoplifters of the World” follows the night of the day that the band, The Smiths, broke up. The twentysomething fans of the band are distraught and in mourning over their loss and one of their number, Dean (Ellar Coltrane), takes matters into his own hands. Armed, he single-handedly takes over the local hard rock station and takes the DJ, Full Metal Mickey (Joe Manganiello), hostage. At first, Mickey disdains his captor’s favorite music but, as the night progresses and it is all Smiths all the time, they bond and become kindred spirits. The rest of the movie, populated by the band’s fans, is about the self-centered entitlement of the American youth in that self-centered decade. I like Dean and Mickey better

RLJE releases “Shoplifters of the World” in theaters, on demand and digitally on 3/26/21.  Here is a link to a virtual screening.