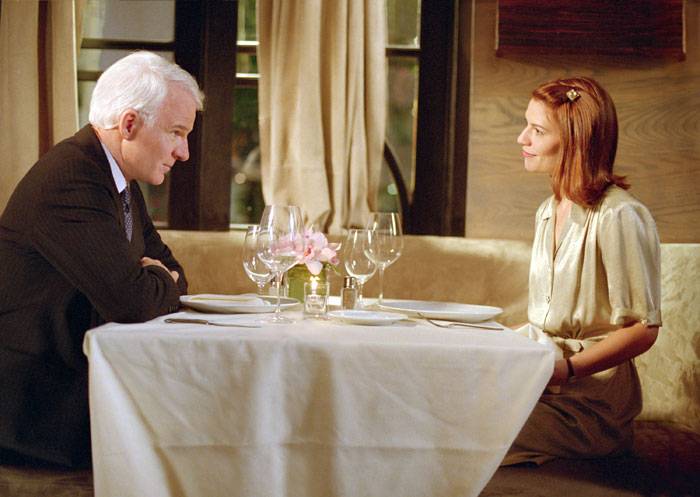 Mirabelle Buttersfield (Claire Danes) emigrated from the wilds of Vermont to Los Angeles to become an art gallery star. Instead, she stands behind the go-nowhere glove department counter at Saks, bored. When she is asked out by grungy-looking Jeremy (Jason Schwartzman), the lonely Mirabelle readily agrees but it’s not the swept-off-her-feet romance she hoped for. Then, one day, wealthy, suave Ray Porter (Steve Martin) appears at her counter and the true love she dreamed of may be hers for the taking in “Shopgirl.”

Mirabelle Buttersfield (Claire Danes, "Stage Beauty") is a transplanted Vermonter drifting through life in L.A. selling the occasional art work but supporting herself at the formal glove counter of Saks Fifth Avenue. She yearns to make a romantic connection and, for a time, the rumpled, bumbling amplifier font-painter Jeremy (Jason Schwartzman, "I Heart Huckabees") fills the bill, but when the older, sophisticated, ultra-wealthy Ray Porter (writer/producer Steve Martin, "Cheaper by the Dozen") asks her out to dinner during his frequent trips to L.A., she's swept off her feet in Steve Martin's adaptation of his novella "Shopgirl." Director Anand Tucker ("Hilary and Jackie") preserves everything about Martin's book, which was nothing if not a reflection of its author, in this faithful adaptation which almost celebrates the state of being lost and lonely. "Shopgirl" is a rainy day film, perfect for those occasional urges to drown oneself in melancholy. Mirabelle is the type of woman who could go to work for days on end without talking to someone then return home to a cat who hides under her sofa. When she's approached at the laundromat by Jeremy, they would seem to have nothing in common except the need for human interaction, and indeed, the date which follows doesn't hold much promise. Then Mirabelle's wooed in an entirely different way. A silver-haired stranger takes her advise purchasing a pair of gloves which she finds on her doorstop the following evening. Dinner with Ray Porter is seemingly an equally awkward affair, yet the thrill of being picked by this man of the world elevates Mirabelle and her fragility appears to touch him. But Ray Porter never considers Mirabelle as a long term partner while Mirabelle only sees a man who increasingly wants to spend his time with her. This romantic disconnect that will leave Porter more sadly self aware and Mirabelle more willing to venture out into the world, the same effect, in fact, that she has unwittingly had on Jeremy, who returns a changed man with fortunate timing. And oh what a lonely and remote man Steve Martin must be to have dreamed up this successful man drawn to the allure of an underaged Eleanor Rigby. From the pristine, minimalist design of his L.A. and Seattle homes (production Design by William Arnold, "In Good Company") to the austere arrangement of the takeout sushi he eats standing up in a spotless kitchen, Ray Porter's environment speaks volumes about his disinclination to emotional messiness. Jeremy's digs are, of course the polar opposite. Mirabelle lives in the most tasteful way that she can afford, but a trip home (to lick her wounds), reveals a countrified New England background (her non-verbal parents are played by Frances Conroy ("Broken Flowers") and Sam Bottoms ("Seabiscuit")) cocooned in snow that Porter could have sprung from. "Shopgirl's" love equates to safe havens, a woman's feeling of contentment provided by the extent of a man's physicality post love-making ('I'll take care of you' says Jeremy, enveloping Mirabelle in his arms). Claire Danes plays Mirabelle like a woman walking underwater, a dreamy spirit awaiting the spark of life, and it is, finally, hurtful rejection that makes her come alive. Danes is lovely in the role, gliding through Saks (vs. the book's Neiman Marcus) like one of its mannequins, slumping in reverie when no one is watching. We know that Ray has come to love her before he does - because we have. Martin keeps Porter extremely reserved, yet allows little rays of intrigue into the character just as he's written them. Schwartzman is an amusing disaster who's genuine and cleans up well. "Shopgirl" is not for all tastes. Some are sure to find it arid or even shallow. But for those willing to indulge one particular flavor of a certain mood through a film's running time, "Shopgirl" may fit the bill.