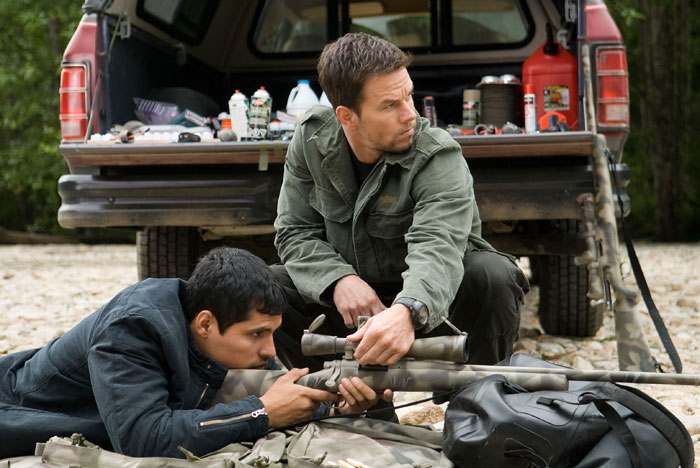 Bob Lee Swagger (Mark Wahlberg, "The Departed") is a highly trained Marine sniper who retired from the military after being left as expendable on a mission in Ethiopia where his lookout was killed. Isolated in a mountain cabin with his dog, Swagger is suspicious when approached by Colonel Isaac Johnson (Danny Glover, "Bamako," "Dreamgirls") and his cronies to assist foiling a long range assassination attempt on the U.S. President, but his patriotism gets the better of him and, on site as a spotter he is instead set up as the "Shooter."

Following his Oscar nominated turn in "The Departed," this is a disappointing Mark Wahlberg vehicle, a mash-up of "First Blood" and 2007's "24" White House rot intrigue that all feels vaguely like last year's "Deja Vu" without the sci-fi and "Cliffhanger" without the cliff hanging. Jonathan Lemkin's ("Red Planet") adaptation of Stephen Hunter's novel "Point of Impact" joins the recent trend of painting America as the land of oil-grubbing, third world murderers and will do little to restore director Antoine Fuqua's post "Training Day" reputation. After determining that a head shot is indeed possible from a one mile range, Swagger is ensconced in an upper floor lookout of the Philadelphia location where the U.S. President will appear with Ethiopia's Archbishop Desmond Mutumbo. Strangely, Swagger makes no connection with his former mission location, but is on edge waiting with Johnson, Jack Payne (Elias Koteas, "Zodiac"), Louis Dobbler (Jonathan Walker, "George A. Romero's Land of the Dead") and wheelchair ridden Michael Sandor (Rade Serbedzija, "Batman Begins," 2007's "24"). He's disdainful of the local cop who joins them, when he notes the policeman's weapon is unclipped but still taken for surprise when Officer Stanley Timmons (Alan C. Peterson) fires from behind him. Shot twice and having fallen two stories through glass, Swagger staggers blocks away from the site, handcuffing a rookie F.B.I. agent, Nick Memphis (Michael Peña, "Crash," "World Trade Center") and leaving him with the truth about the setup. Bob Lee then steals a car which he is eventually forced to drive into a river to make his escape. A little "Rambo" style patching up later and Swagger's on his way South, hoping to hideout with Sarah Fenn (Kate Mara, "We Are Marshall"), the widow of his former partner whom he's never met. It is here that he learns that the President is safe, but Mutumbo is dead, a cover up within a setup. Meanwhile, derided by his colleagues and superiors, Memphis nonetheless will not back down, convinced that Swagger is telling the truth - how could such a celebrated marksman miss his target by 2.5 feet? He begins his own renegade investigation, aided on the inside by Alourdes Galindo (Rhona Mitra, "The Number 23") until he eventually teams up with Swagger himself. After stocking up on explosives (paid for how?) and a quick round of commando training, the newly formed duo do battle with the armed forces sent to exterminate them by Senator Charles F. Meachum (Ned Beatty, "Spring Forward," "Sweet Land"), Johnson's boss. "Shooter" lives up to its title, but could just as easily been titled "Bomber," with its unprecedented number of shots to the head - complete with balletic blood spray, and grandiose fireballs - the type that scatter the screaming enemy aflame through the air but serve as dramatic backdrops for our invincible hero. Wahlberg merely serves the action, giving little depth to Swagger other than stoicism and a love for his dog. The bad guys are various cliches of evil that never strike true terror. Glover talks softly and smiles, a corrupt middle man incapable of menace. Beatty is the greedy cynic, dropping in via helicopter. (It is never made clear how a U.S. Senator, even with an immoral Colonel in his pocket, can orchestrate covert military operations both abroad and at home that leave an entire Ethiopian village slaughtered for the progress of a pipeline or charred U.S. troops all over a Virginia hillside.) Walker is the sniveler and Koteas is the gleeful sadomasochist, sent to kidnap Mara in a plot development edited almost out of existence. Rade Serbedzija turns out to be Swagger's legendary Russian counterpart, now a crippled puppet of Johnson's. While Sandor's demise is unbelievable, his backstory is supplied by a loony backwoods expert in the film's most entertaining bit of unnecessary exposition. "Shooter" is overstuffed and underdeveloped, a cynical, anti-American take on an 80's Stallone film that would have John Rambo shaking his head.