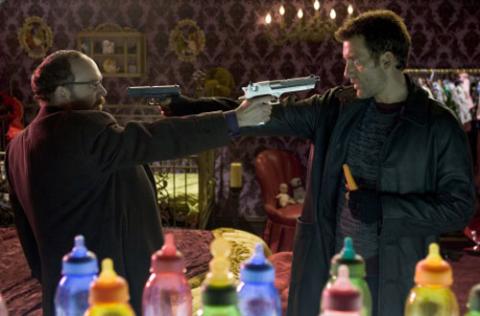 When Mr. Smith (Clive Owen, "Children of Men") sees a crazed gunman chase a pregnant woman into an alley, he pursues, delivers the baby and, along with call girl DQ (Monica Bellucci, "The Brothers Grimm," "How Much Do You Love Me?"), protects it from a mob while trying to figure out why these men are determined to "Shoot 'Em Up."

Writer/director Michael Davis ("Eight Days a Week") clearly has a jones for action and his "Shoot 'Em Up" is a paean to the most preposterous of the genre, but clunky dialogue, a patchwork plot and a poor turn from sexpot Bellucci take the air out of this exercise. A couple of cheesy set pieces may be amusing, but on the whole "Shoot 'Em Up" is a bore. Davis intrigues with his set up, a dead pan piece of incongruous parts coming together in a humorous whole - that pregnant woman looks so wholesome in what appears to be a yellow dress and white Keds, holding her belly and whoofing as she waddle/runs by Smith sitting on a bench in a crummy area of some town. The man who follows holding a gun in the air is shouting the foulest of things at the preppie looking mom to be. Smith, crunching on a carrot (a bit of personality that is just too forced as are all the bunny quips that follow) shakes his head in disgust at having to get involved and is soon surprised to find himself blazing away at an army of bad guys with a gun supplied by Ms. Innocent looking. Smith gets away with the kid (mom doesn't make it) and tries several ploys to find it a home, but chief baddie Mr. Hertz (Paul Giamatti, "The Nanny Diaries"), now pissed off at being bested by a standerby, upends every one (when Smith leaves baby Oliver on a park roundabout, the gunplay is amusingly inventive) until Smith gets to a brothel (not immediately identifiable as such) and DQ, a hooker who specializes in suckling perverts. Clive Owen, last seen trying to protect another pregnant woman and child in "Children of Men," is a fine actor who never really seems comfortable spouting "Smokin' Aces" gone comic book style dialogue, a job better left to the likes of Jason Statham or Vinnie Jones. When Owen takes out a half dozen bad guys while screwing Bellucci and caps the whole with a truly awful pun, it's an embarrassment. Better is Giamatti who literally growls through his over the top character, but Davis supplies the role with little back character other than another forced bit involving a persistent wife calling on a cell phone. Bellucci, looking busty but haggard, seems to be delivering her lines phonetically. The history Davis supplies both Smith and DQ just all too convenient parallels to the circumstances they find themselves in here. Davis pays homages to the likes of John Woo's "The Killer" and Besson's "The Professional" but except for a funny take on "Point Break's" parachuting shootout, they play like an enthusiastic film school kid's recreations on a limited budget. Nothing is remotely believable, especially the ridiculous killings by carrot, and the hero should have been dead 100 times over. "Shoot 'Em Up" will probably entertain young teenaged boys, but Owen needs to move quickly to get this off the top of his filmography.