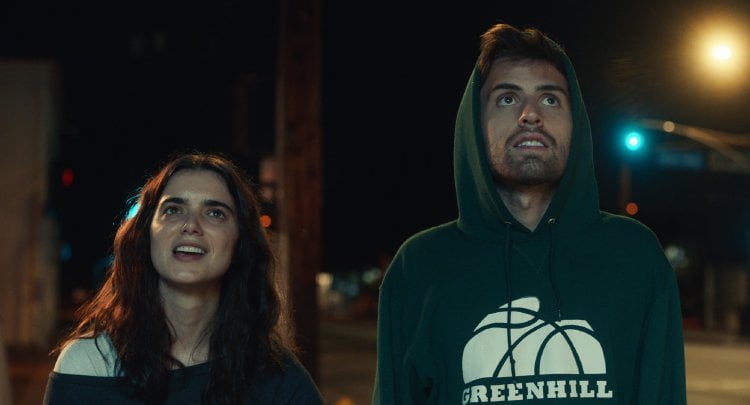 Lonely college freshman Alex (writer/director Cooper Raiff) takes a risk one night and puts himself out there at an infamous campus frat party house and something amazing happens.  He meets Maggie (Dylan Gelula, "Support the Girls") and lightning strikes.  But apparently it only struck for that one magic night as Maggie doesn't even seem to remember him the next day.  Hoping for that impossible second strike, Alex returns to party fraternity "Shithouse."

After tweeting a link to an earlier version of this film to Jay Duplass, first time filmmaker Raiff not only procured himself a producer, but went on to win the Grand Jury Prize at the 2020 SXSW Film Festival.  Based very much on his own experiences, Raiff’s Alex is an emotionally open nice guy who is unabashedly close to his mother (Amy Landecker, “A Serious Man”) and younger sister (Olivia Welch) back home and to his childhood stuffed German Shepherd in the dorm room he shares with Sam (Logan Miller, “Love, Simon,” “Escape Room”), qualities ripe for derision in an environment where everyone yearns for a cool quotient.

Raiff establishes his protagonists with cross cutting.  As Alex attempts to converse with his headphoned roommate when he isn’t getting locked out of his room in a post-shower towel, we view Maggie through the bowl that holds her pet turtle.   She seems comfortable in her own skin while Alex is awkward, if helpful with everyone as proven with the first stranger he crosses paths with (a hilarious bit part) at the party, so drunk he threatens to puke in Alex’s Solo cup.  Immediately after the guy leaves, Maggie sidles up, but their conversation is cut short when a friend interrupts with news of ‘Operation F&#% Scott,’ a development that unsettles Alex.  He’s waylaid by Georgia (Abby Quinn, “Landline,” 2019’s “Little Women”) with plans of Spin the Bottle, but makes a hasty exit to spend the rest of his evening attending to the drunken Sam who goes on a ‘shitty roommate’ rant.

After establishing that Maggie is comfortable with casual sex and Alex is decidedly not, upon their next meeting, after what for him is a boldly cheeky inquiry into ‘Operation Scott,’ he accepts an invitation back to her room where, after having sex for the first time, Alex’s pillow talk consists of telling Maggie he literally has no friends except for his stuffed animal.  She doesn’t quite know what to make of this, but in the spirit of openness she confides that her pet turtle died that day, only to add, when pressed, that she put Pete in a shoebox and threw him in a dumpster.  Alex is horrified.  So begins the quirky all night adventure of retrieving Pete’s body for a proper burial.

Raiff, who resembles Adam Scott or David Tennant and looks too old to be a college freshman, has an appealing hangdog quality, but his Alex borders on pathetic, almost dashing our rooting interest in him, while Gelula’s Maggie reads a bit too cold.  Perhaps that’s the point, a real world connection between two people of vastly different backgrounds, made manifest by the couple of hairpin turns which follow their hookup.  The film sometimes almost lapses into ‘Sundance twee,’ but Raiff comes across as so emotionally honest in his performance that as a filmmaker he manages to stay grounded.  Take, for example, Alex’s ‘conversations’ with his stuffed animal, a device which could have gone off the rails, if, say, Raiff had chosen to give the dog a voice.  Instead he uses subtitles and pulls it off.  And if Maggie comes across as overly harsh, Raiff uses that to inform his own character’s growth.  Logan Miller is a plus, turning the horny boozehound of so many college comedies into a real person.

“Shithouse” plays like an even more indie take on the indie that was “Before Midnight.”  I may not be quite as enamored as the SXSW jury, but Raiff is definitely a new and interesting filmmaking voice.