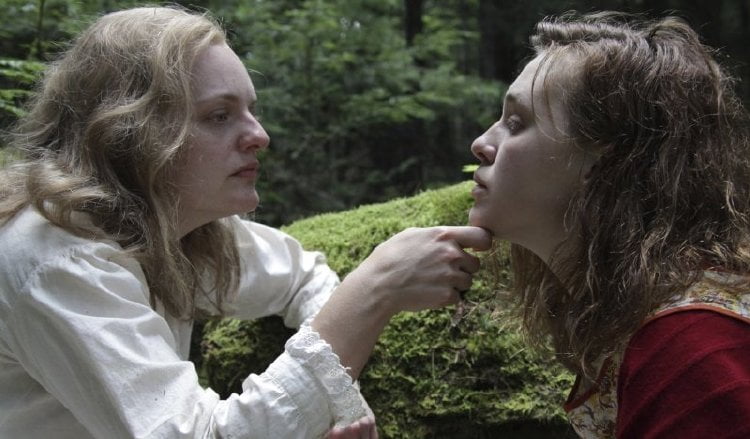 After many find her classic short story ‘The Lottery’ repellant, Shirley Jackson (Elisabeth Moss), already feeling like a pariah in the college town of Bennington, Vermont, takes to her bed.  Her husband, literary professor Stanley Hyman (Michael Stuhlbarg), engages a protégé, Fred Nemser (Logan Lerman, "Indignation") and his new, pregnant wife Rose (Odessa Young, "Assassination Nation"), to board with them, pressuring Rose to become their de facto housekeeper while also expecting her to keep an eye on “Shirley.”

Adapting Susan Scarf Merrell's 'Shirley: A Novel,' screenwriter Sarah Gubbins’ fictitious account of Shirley Jackson’s lead up to her 1951 novel ‘Hangsaman’ is a feminist take on "Who’s Afraid of Virginia Woolf" laced with a murder mystery and betrayals that lead into madness.  Featuring a mind blowing, career best performance from Elisabeth Moss, “Shirley” is a tour de force of imagination, director Josephine Decker ("Madeline's Madeline") keeping her camera in close to get us inside Shirley’s head.

The film opens as the newlywed Nemsers travel toward Bennington by train, using the opportunity for lusty sex.  When they arrive at the Hyman household, it is in full saturnalian swing, Stanley leading conga lines, Shirley holding court in the living room, tossing stinging barbs at her husband to everyone’s drunken amusement.  Rose’s attempt to connect with her hostess goes poorly, Shirley viewing her houseguests as invasions of her privacy and routine.

Their first dinner as a foursome is no better (‘So Rose, tell us about your shotgun wedding’), Rose demanding of Fred that they stay no longer than one week.  But when the women are left alone with the men at the college, the dynamic begins to change when Rose acquiesces to Shirley’s demand to leave her in order to gather information about (the true story of) Paula Jean Welden, an eighteen year-old who mysteriously disappeared while out for a walk.

‘Virginia Woolf’ comparisons extend beyond the older, bickering couple infecting the younger with an emphasis on children, Shirley warning Rose that motherhood will change everything and declaring herself a witch capable of casting a spell for a healthy baby or ‘the other.’  This leads into the women’s speculations about Paula, with Rose’s interrogations of a postal worker and discoveries of documents leading to theories about a miscarriage and possible murder, Shirley implicating a Bennington professor.  In the real world, Stanley’s behavior is increasingly creepy, nuzzling Rose in the kitchen (she thinks it’s Fred) and corralling Fred into evenings at ‘The Shakespeare Society,’ a revelation about which will send Rose over Shirley’s edge (and which is foreshadowed early during a walk Rose takes through campus grounds).

Moss is electrifying here, a coiled cobra with barbed tongue in social situations, a troubled woman dealing with a controlling husband and judgmental society by self medicating behind closed doors.  The agenda of a smirk flickering across her face can be deadly.  Her eyes alternately convey confusion, fear and secret knowledge.  Hers is a mesmerizing performance.  Also good is the lesser known Australian actress Young whose initially happy bride gradually ‘absorbs’ Shirley’s demons (she also plays Paula in reconstructed flashbacks).  Stuhlbarg gives a demented performance, a case of bravado in the face of deep seated insecurities.  Lerman is a corruptible vessel.

Decker’s production is period perfect, costume, hair and makeup all strong contributors (an outfit purchased for Shirley for the Dean’s party is almost a character unto itself).  She’s created a fever dream of a movie, a portrait of an author that analyzes her viewpoint as a woman in a world stacked against her.