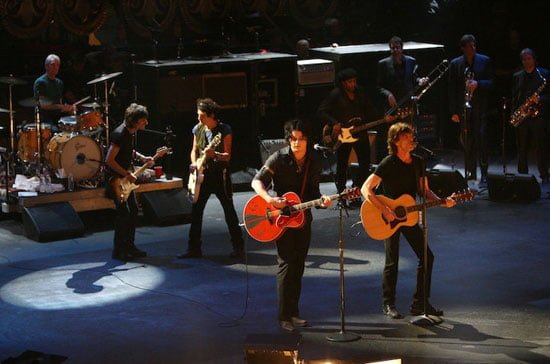 In 2006, the Rolling Stones landed in North America for the “A Bigger Bang” tour, dispensing their decades long tunes to adoring fans across the land. Director Martin Scorsese takes on the task of bringing the Stones’ music to the big screen as he uses his many cameras to capture a pair of benefit concerts at New York’s Beacon Theater. Hosted by none other than former President Bill Clinton, the concert docu shows the band getting its deserved acclaim as one of the world’s great musical icons in “Shine a Light.”

This remake of William Shakespeare’s gender bending comic farce “The Twelfth Night, or What You Will” holds much akin to the better 1987 girl-pretends-to-be-a-boy film, “Just One of the Guys” (with Joyce Hauser doing a very credible job in making she really seem like he). But, Amanda Bynes is a likable young actress and, while she and her costars aren’t required to stretch beyond the slight script by a cadre of writers – Ewan Leslie, Jack Leslie, Karen McCullah Lutz and Kirsten Smith (with the Bard given a contributor’s nod) – they are all appealing. Viola needs to prove herself a capable athlete. When the chance comes to pose as brother Sebastian, she enlists her makeup expert friend and transforms the pretty Viola into, well, the pretty Sebastian. She, now he, is assigned to the dorm room, at her sibling’s prep school, of hunky roommate, Duke (Channing Tatem), who happens to be a star on the school’s soccer team. As Duke helps Sebastian with his soccer game, hidden Viola falls for her handsome roomy. But, that’s not all. Duke has the hots for the beautiful Olivia (Laura Ramsey) and enlists Sebastian to help him get the girl. Meanwhile, Olivia has set her cap for the sensitive male, Sebastian. Just to complicate things, Viola’s brother decides to come home two days early – on the day of the big game that will prove Viola is just as good a soccer player as any guy on the team. She’s the Man” can be compared to two other modern adaptations of Shakespeare’s plays – “10 Things I Hate About” (“The Taming of the Shrew”) and “O” (“Othello”). It doesn’t stand up to the source material as well as theses others but it does have an attractive cast that will draw mainly adolescent femme auds that are fans of Bynes’s popular TV shows, “What I like About You” and “The Amanda Show.” I, personally, adore her comic performance in one of my guilty pleasures, “Big Fat Liar.” She is a wholesome presence and good role model for the target audience. The rest of the kids in the uniformly good looking cast (except for the brace-wearing ugly duckling, Eunice (Emily Perkins)) but don’t put much more than two dimensions to their characters. And, they are good-natured, too. Techs are suitable to the B-level teen entertainment that will carry “She’s the Man” in its niche markets, both at theaters and on DVD. If you shut one eye you can almost believe this is Shakespeare. At least it’s not adapted from a video game.