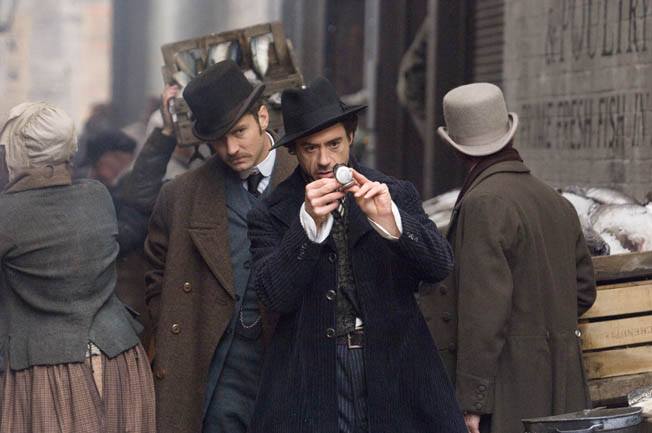 Sherlock Holmes (Robert Downey Jr.) and his stalwart assistant Dr. John Watson (Jude Law) have put yet another grizzly case to rest with the incarceration of the notorious self-proclaimed sorcerer Lord Blackwood (Mark Strong). However, things are not what they appear when the executed lord miraculously returns from the grave and Holmes is called upon to unravel the mystery in “Sherlock Holmes.”

1890, Victorian London. A man works his way into an inner city stone temple through security towards a secret ceremony. A black robed man is in the process of sacrificing a woman, drugged and secured to a stone altar. The man and his partner descend, halting the proceedings minutes before the police, led by Inspector Lestrade (Eddie Marsan, "Happy-Go-Lucky"), arrive when it would have been far to late to save the girl. The man is "Sherlock Holmes." It has been difficult to anticipate just what "Lock, Stock and Two Smoking Barrels/Rocknrolla's" ex-Mr. Madonna Guy Ritchie would do with this classic character and the trailer caused dread with the possibility of a superhero Holmes. The result is a mixed bag. Ritchie and his screenwriters Michael Robert Johnson, Anthony Peckham ("Invictus") and Simon Kinberg ("Mr. & Mrs. Smith") have nicely laid the groundwork for a kickass Holmes with an underground boxing scene in which Holmes is clearly honing his mental ability to outmaneuver his opponent, pre-planning his moves in mere seconds, like a chess match on speed (it should be noted that Sir Arthur Conan Doyle's Holmes was a boxer and martial artist). But the supremely talented Robert Downey Jr. ("Iron Man") is in danger of becoming a brand now, even if he can still milk a laugh with a well timed toss off and London as conceived here is a psychotic melding of the old and new glued together with often unconvincing special effects. Although ritualistic murderer Lord Blackwood (Mark Strong, "The Young Victoria") awaits execution, he informs Holmes that death will not stop him and sure enough, even though hung and declared dead by Dr. John Watson (Jude Law, "Closer," "Cold Mountain") himself, Blackwood is reported as having been seen walking from his blown apart crypt. The man who has taken Blackwood's place in his coffin, Reordan (Oran Gurel), leads Holmes and Watson to a most peculiar laboratory where Holmes begins to piece together elaborate clues. Their investigation leads them into encounters with Blackwood's giant enforcer Dredger (Robert Maillet, "300) at a shipyard and some nasty mechanical equipment at a slaughter house. Many explosions and mayhem ensue as Holmes learns he is dealing with the Temple of the Four Orders represented by three animal talismans linked to recent deaths and a fourth - the Lion - representing Parliament itself (how very Dan Brown). There are also two women around to upset the apple cart. Holmes is uneasy with Watson's intentions to marry Mary Morstan (Kelly Reilly, 2005's "Pride & Prejudice," "Me and Orson Welles") and bedazzled by the reappearance of Irene Adler (Rachel McAdams, "State of Play," "The Time Traveler's Wife"), a professional thief and the only criminal able to make him lose his cool. Irene is serving another dark master, one who is using her to get into Holmes's head. Ritchie and his team have taken pains to imbue their film with Holmesian touches and be true to Doyle's original creation, but ofttimes their 'modernizations' just smack of commercialism, the blanding out and dumbing down typical of Hollywood blockbusters. Still, there are many nice touches to be found in the disarray that is 221B Baker Street, full of Victorian tsotchkes and the detritus of earlier cases. Watson's dog, Gladstone, is frequently made Holmes's Guinea Pig and Holmes's freewheeling use of narcotics is nicely alluded to with one of Watson's funnier lines. Cinematography by Philippe Rousselot ("Charlie and the Chocolate Factory") has a cold, greasy feeling that suits its time and place but while interiors (production designer Sarah Greenwood, "Pride & Prejudice"), are nicely executed, exteriors are patently false looking. Ritchie and Greenwood have concocted a period London full of industry - ship building, machine engineering and bridge building - which gives the film an air of thoughtful whimsy, but streets often look set bound and backgrounds look like the mattes that they are. Perhaps the filmmakers' worst offence is their climax high up on a construction site (Tower Bridge), a device that was probably old in Sherlock's time and which, as executed, never convinces of danger. Costume is also mixed. Holmes's Bohemian disarray, with no deerstalker in sight, works well, as does Watson's more pristine suiting, but Adler's elaborate costuming is either too modern (shocking pink satin!) or too tarty. Blackwood's character is nicely embellished with a twisted front tooth that gives a sinister appearance. Hans Zimmer's ("The Dark Knight," "It's Complicated") score ranges from period instrumentals to fight scene jigs, lending the film a comic air. Downey Jr.'s ability to nonchalantly toss off a line before the underlying sarcasm hits is in full force here and beautifully suited to the character and the actor is completely capable of externalizing a man whose thoughts run on overdrive. Still, the actor isn't offering anything new here. Law is nicely understated, the very essence of a supporting actor. Rachel McAdams, however, is too modern, the film's only misstep, whereas Law's intended, Mary, is a strong woman appropriate for 1890 beautifully played by Reilly. As the villain of the piece, Mark Strong is convincing and aided by Rousselot's terrifically effective lighting when he lays down his challenge to Holmes. Marsan, a terrific character actor, has his second disappointing appearance in a row after his unconvincing John Houseman in "Me and Orson Welles." 'Imagine being able to control a device via command - it's the future!' says Holmes during the film's climax. It is also the key to what is sure to be the sequel to a newborn series.

Director Guy Ritchie’s latest opus gives us an updated look into the mystique of Sir Arthur Conan Doyle’s famous detective character, Sherlock Holmes. The sleuth was first introduced to the public in Doyle’s books and has been the subject for films and television since as early as 1909. Holmes and Watson have proved reliable source of entertainment for many generations. Holmes, having solved the case of serial killer Blackwood, is having a bout of bored agitation. Compounding his deductive inactivity is moving day for Watson, who is engaged to pretty Mary Morstan (Kelly Reilly) and starting his own practice. First, though, Holmes and Watson must attend Lord Blackwood’s hanging, where the doctor declares the villain dead. It looks like the super sleuth is going to be alone, bored and inclined to ingest things that he should not. Things change when the killer is seen walking by the cemetery caretaker – after he was buried. Holmes is on the case and Watson, feeling his medical integrity at stake, reluctantly joins his friend. Holmes is sidetracked, though, when he receives a call from his old flame, Irene Adler (Rachel McAdams), a woman with whom he did not part company on the best of terms. Little does Holmes know that she is employed by a mysterious figure with evil designs. The story by committee (there are five credited scribes) is a hodgepodge of ideas that usually work. They trot out, early on, Sherlock’s gifts for deductive reasoning – while engaging in fisticuffs, no less – and physical prowess, then proceed to display both many times. This makes “Sherlock Holmes” episodic as the sleuth and the good doctor work to uncover Lord Blackwood’s wicked plans to use magic to take over Parliament. Robert Downey Jr. is falling into doing the same role ad infinitum. There is little difference from his Iron Man persona, except Holmes looks more ragged and haggard. Jude Law is first-rate as Dr. Watson and he makes the man a friend and equal to his brilliant colleague. I always like Rachel McAdams but her character Irene is too new millennium to fit properly into the story. Kelly Reilly has the tough role as Watson’s fiancée, hated by Holmes for taking his friend and companion away, but gives Mary real dimension. Mark Strong starts out, uh, strong but at about the half way mark, changes from sinister to silly. Eddie Marsen, as Inspector LaStrade, is not given the bumbling manner that the character usually serves. Techs are mainly CGI-laden with historical views of period London with the likes of the Tower Bridge under construction – which gives the film the locale for its big finale. This is definitely clichéd and has been done to death by many action films over the last decade. The gang of writers at least could have come up with something original. Costume and makeup of the time are designed rather than recreated so there is modernity that feels manipulative. I had high hopes for “Sherlock Holmes” but the writing fails to create a fully integrated adventure tale. This is a hip interpretation of the source material but give me Basil Rathbone any day as Holmes.