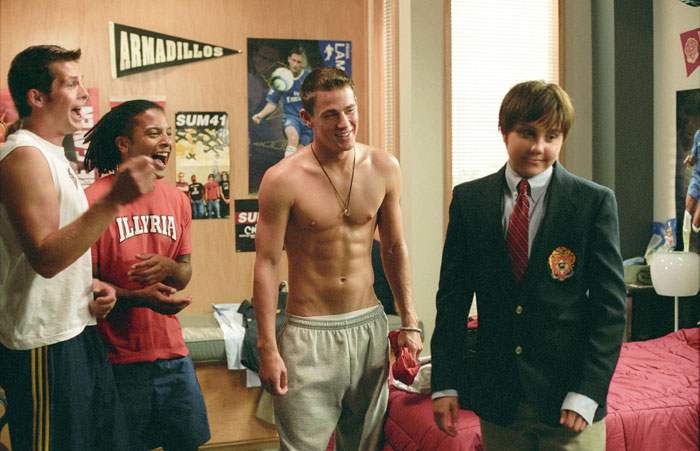 Viola Johnson (Amanda Bynes) knows she has the makings of a terrific soccer player. But, her school cancelled the girls’ program in favor of the boys’. (Everyone knows that the female of the species can’t compete with the male on the playing fields.) When her twin brother Sebastian (James Kirk) spontaneously decides to head off to London for a couple of weeks to play guitar at a music festival, he asks sis to cover for him at his school. This gives Viola a gem of an idea: pose as Sebastian (no one knows him at his new academy) and prove that she is good enough to play with the big boys in “She’s the Man."

After a bout of barefoot beach soccer, Justin (Robert Hoffman, TV's "Nick Cannon Presents: Wild 'N Out," "Coach Carter") tells his girlfriend Viola (Amanda Bynes, "What a Girl Wants") that she's better than most of the guys on his team, but when their high school cuts the girls' team he won't stick up for her right to try out with the boys. Viola dumps him, then jumps at an opportunity to impersonate her brother, Sebastian (James Kirk, "X2," "Two for the Money"), on a rival school's team and prove "She's the Man." Ten years after "Romeo + Juliet" started the trend of making over Shakespeare in today's teenage world ("10 Things I Hate About You" and "O" followed), teen sensation Amanda Bynes (TV's "What I Like About You") takes a crack at one of the Bard's gender bending roles with bland results. Bynes is a cutie with a natural likability that keeps the movie buoyant, but just barely. Perhaps a stronger director than "Who's Your Daddy?'s" Andy Fickman could have given this vehicle some much needed zip. In this retelling of "Twelfth Night" (adapted by first time writer/producers Ewan Leslie and Jack Leslie along with "Ella Enchanted" scribes Karen McCullah Lutz, and Kirsten Smith), Viola becomes attracted to her brother's roommate Duke (Channing Tatum, "Coach Carter"), who, of course, thinks she's her brother while he pines for Olivia (Laura Ramsey, "Lords of Dogtown"). Olivia would rather date who she thinks is Sebastian but is really his sister at least until the real Sebastian shows up in the home stretch. Now Bynes is just never believable as a guy, really, but she's got so much confidence she very nearly bluffs her way through. Channing Tatum, on the other hand, is quite good as a mixed up guy who projects studly cool while agonizing over deeper, more sensitive feelings. Young girls should love this guy and he's a very suitable match for nice girl Bynes. Note that some slightly off color jokes and a silly tampon gag push this Bynes vehicle into PG-13 territory. Among the supporting players, Emily Perkins ("Ginger Snaps") is notable for as the dorky girl, named Eunice of course, who blossoms. Julie Hagerty ("Airplane!") plays Viola's mom, a girly girl obsessed with all things debutante despite her jock daughter's nature and "Arrested Development's" David Cross is the overly friendly Principal Gold, a clueless social pyriah. Former UK soccer great Vinnie Jones ("Lock, Stock and Two Smoking Barrels") is caught in a bit of typecasting gone bad as a high school soccer coach. "She's the Man" is all rather silly and only even approaches anything like convincing on the soccer field (make no mistake - this is a far cry from "Bend It Like Beckam" though), but it's sweet enough in its own way. Bynes needs to strengthen her acting chops, though, if she wants to stay in the game.

This remake of William Shakespeare’s gender bending comic farce “The Twelfth Night, or What You Will” holds much akin to the better 1987 girl-pretends-to-be-a-boy film, “Just One of the Guys” (with Joyce Hauser doing a very credible job in making she really seem like he). But, Amanda Bynes is a likable young actress and, while she and her costars aren’t required to stretch beyond the slight script by a cadre of writers – Ewan Leslie, Jack Leslie, Karen McCullah Lutz and Kirsten Smith (with the Bard given a contributor’s nod) – they are all appealing. Viola needs to prove herself a capable athlete. When the chance comes to pose as brother Sebastian, she enlists her makeup expert friend and transforms the pretty Viola into, well, the pretty Sebastian. She, now he, is assigned to the dorm room, at her sibling’s prep school, of hunky roommate, Duke (Channing Tatem), who happens to be a star on the school’s soccer team. As Duke helps Sebastian with his soccer game, hidden Viola falls for her handsome roomy. But, that’s not all. Duke has the hots for the beautiful Olivia (Laura Ramsey) and enlists Sebastian to help him get the girl. Meanwhile, Olivia has set her cap for the sensitive male, Sebastian. Just to complicate things, Viola’s brother decides to come home two days early – on the day of the big game that will prove Viola is just as good a soccer player as any guy on the team. She’s the Man” can be compared to two other modern adaptations of Shakespeare’s plays – “10 Things I Hate About” (“The Taming of the Shrew”) and “O” (“Othello”). It doesn’t stand up to the source material as well as theses others but it does have an attractive cast that will draw mainly adolescent femme auds that are fans of Bynes’s popular TV shows, “What I like About You” and “The Amanda Show.” I, personally, adore her comic performance in one of my guilty pleasures, “Big Fat Liar.” She is a wholesome presence and good role model for the target audience. The rest of the kids in the uniformly good looking cast (except for the brace-wearing ugly duckling, Eunice (Emily Perkins)) but don’t put much more than two dimensions to their characters. And, they are good-natured, too. Techs are suitable to the B-level teen entertainment that will carry “She’s the Man” in its niche markets, both at theaters and on DVD. If you shut one eye you can almost believe this is Shakespeare. At least it’s not adapted from a video game.