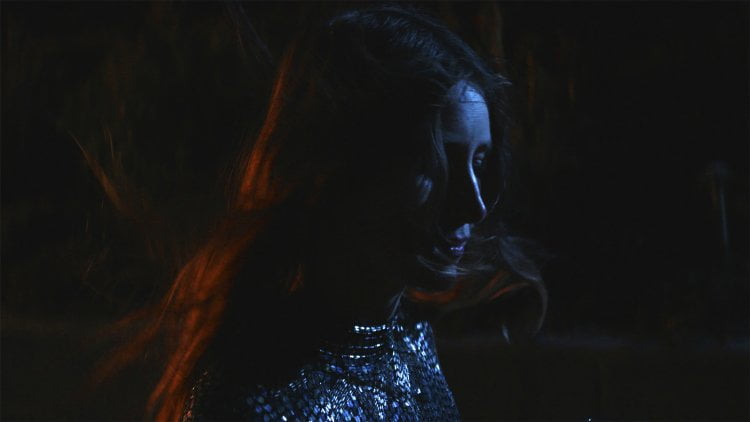 As Amy (Kate Lyn Sheil, "You're Next") moves into her new house, she becomes uneasier and uneasier, her mood reflected in the classical music spinning on her turntable.  When wine isn’t enough to calm her nerves, she calls her friend Jane (Jane Adams, "Happiness"), who arrives and is distressed that Amy’s had an alcoholic relapse and is convinced “She Dies Tomorrow.”

Writer/director/producer Amy Seimetz (HBO's 'The Girlfriend Experience') has achieved exactly what she set out to do by illustrating the contagious effect of fear.  But while this idea is artfully executed and expressed by its ensemble, watching a series of people become anxious as they face mortality isn’t the most satisfying cinematic experience, especially given its time jumping dream logic (Amy often ‘transitions’ from one place to another by seemingly waking up from a prior nightmare).  What absorbs in the moment may not make the most lasting of impressions, despite Seimetz’s having tapped into the zeitgeist.  One wonders how this same idea would have been realized by David Lynch.

The film is like a bad juju baton toss, occasionally leavened with welcome humor, like the sight of Amy searching for cremation urns on her laptop (it’s funnier than it sounds).  Jane, who we’ve heard turn down an invitation in order to respond to Amy’s crisis, concludes her friend is ‘loaded,’ returns to her home and gets into pj’s and slippers.  But when she goes downstairs to look through her microscope, we see the same colorful strobing that announced Amy’s downward spiral and the next thing we know, Jane’s calling her brother Jason (Chris Messina, HBO’s ‘Sharp Objects’) to tell him she’s coming over after all.  She runs out of her house as is, leaving her front door wide open, arriving at her sister-in-law’s thirtieth birthday celebration to tell them she is going to die tomorrow.  Susan (Katie Aselton, “The Puffy Chair”), who apparently finds Jane self-centered at the best of times, is not amused.  Her guests, Brian (Tunde Adebimpe) and Tilly (Jennifer Kim), think Jane’s crazy.  All four will be infected.

Seimetz keeps cutting back to Amy, who encounters a Dune Buggy Man (Adam Wingard) when she drives out to the desert with Craig (Kentucker Audley).  It is unclear whether this is the day after we’d last seen her in her sequined dress.  A future scene will feature her in that garb again, sitting with yet another man presumably still in the desert, indulging in bongs.  Later, she’ll wander into the backyard of Erin (Olivia Taylor Dudley) and Sky (Michelle Rodriguez) to little purpose.  Jane goes to her Doc (Josh Lucas) and almost indulges in some end-of-the-world sex before he catches the bug and rushes home to his wife, leaving Jane hanging and us chortling.

Seimetz links artworks, presumably Jane’s, into her psychedelic depictions of contagion and self harm.   Amy’s obsession with custom leatherwork also has morbid roots.  The filmmaker’s shift from suburbia to the desert adds to the apocalyptic tone of her work.  But “She Dies Tomorrow” is ultimately one of those films more admired than enjoyed.