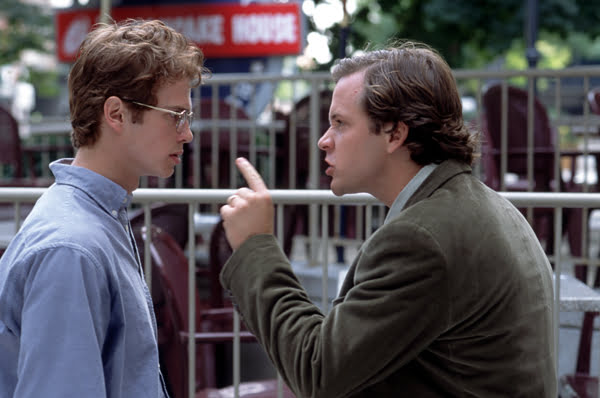 In 1998, the median age at the revered publication The New Republic, often called the inflight magazine of Air Force One, was twenty-six. Its star reporter, Stephen Glass (Hayden Christensen, “Star Wars: Episode II -- Attack of the Clones”), was the youngest. But Glass, who ingratiated himself with everyone he came into contact with, had an obsessive need to be the center of attention in order to overcome parental displeasure with his choice of vocation. This resulted in a severe character flaw that led to a very public downfall chronicled in writer/director Billy Ray's "Shattered Glass."

Based on the Vanity Fair article by Buzz Bissinger, "Shattered Glass" is a cautionary journalistic tale which has been repeated all too often in recent years. Director Ray (cowriter of "Hart's War") has crafted a lean, suspenseful film that plays like the inverse of "All the President's Men" on a smaller scale. Ray has cannily structured his story about journalistic lies around a cinematic lie. We're introduced to Glass as he visits his old high school. His proud former teacher Mrs. Duke stands by as Glass humbly addresses a class of worshipful teens. Ray cuts back and forth from Glass's address to the students and the real story, and it is not until the film's wrap that the high school device is revealed as a bit of glory fantasizing from within Glass's own mind. Seeds of doubt about Glass's character are sown early on. When coworkers overhear mentions of work for other publications ("Harper's," "George," "Rolling Stone"), he always replies that 'it's probably nothing' while sweeping evidence of such under the rug. His editor, Michael Kelly (Hank Azaria, "The Birdcage"), calls him in to fact check a reference to mini bars when an irate story subject claims a hotel location does not provide them. When Glass believes he's about to be criticized, he makes the matter personal with a childishly defensive 'Are you mad at me?' All are loyal to Glass, however, who entertains the office with his story pitches at editorial meetings. Popular editor Kelly (who recently died covering the war in Iraq as managing editor of Boston's Atlantic Monthly) is supportive of all of his staff. Editor Caitlin Avey (Chloë Sevigny, "Boys Don't Cry") believes Glass is faultless while writer Amy Brand (Melanie Lynskey, “Sweet Home Alabama”) tries to emulate him. Office administrator Gloria (Linda E. Smith) jumps to attend to his every wish. The only unknown quantity is colleague Chuck Lane (Peter Sarsgaard, “Boys Don't Cry”), whose rigid, humorless demeanor has made him a bit of an office pariah. Office politics become high drama when Kelly makes one stand too many to owner Marty Peretz (Ted Kotcheff), who fires him and elevates Lane into the position. Lane knows he's the worst choice to gain office loyalty, but works hard at it, even when the editor of the online Forbes Digital Tool asks for source references on Glass's latest article, “Hack Heaven.” Ray places us in the position of Glass's audience, so that we discover his deceptions along with his rivals and colleagues. When Glass makes his story pitches during editorial meetings, usually to high hilarity, they're accompanied by visualizations of his words. Only later do we comprehend that these were fictional tryouts, made up ideas to be expounded upon based on the reception of their telling (in fact, Glass made up all or part of 27 of the 41 articles he wrote for The New Republic). When Tool editor Kambiz Foroohar (Cas Anvar) and his reporter Adam Penenberg (Steve Zahn, "National Security") keep pressing Lane, he's slower than we are to recognize the flimsiness of what Glass presents to back himself up. Ray also allows us insights into Lane's intentions that he denies the other characters, which makes his hero sympathetic to the audience while appearing villainous to New Republic's staff. As the man in the unenviable position of calling out the popular Glass right after replacing a beloved editor, Sarsgaard soars. He's the real star of the film, with his tightly controlled dawning realization simmering under an unfashionably grim surface. He has the ability to let us see the character think. Christensen has a difficult role as the obsequious, overtly self-effacing con artist and he doesn't quite succeed in the role. He makes Glass's manipulations too obvious so that his colleagues would appear less intelligent for having fallen for them. Sevigny's droll and tart performance doesn't fall into this trap, but Lynskey seems too much a babe in the woods. Azaria brings the highly ethical Kelly to life, his morals so inured he fails to see the shortcomings of another's. "Shattered Glass" isn't entirely fleshed out as a psychological profile, but works well as a whodunnit, as Lane pulls apart the house of cards that Glass had constructed. It is a serious response to the con artistry of "Catch Me If You Can" with the feel of real ink in its veins.

Stephen Glass (Hayden Christensen) is modest, self-effacing, the youngest editor on the prestigious magazine The New Republic and mentored by media maestro Michael Kelly (Hank Azaria). Besides his respected work as a contributing writer for TNR he also freelances for other publications as Rolling Stone, Harper’s and George. Stephen’s career is on the fast track until a bizarre set of events stops it cold in “Shattered Glass.” There aren’t many films these days that examine the power of the written press and the importance of the truth in the service of that craft. “All the President’s Men” is probably the last film that focused on the print reporters and the absolute necessity for integrity in what they write. Director/writer Billy Ray based his screenplay on the article by H.G. “Buzz” Bissinger that appeared in the September 1998 Vanity Fair. That piece broke the scandal surrounding its subject, Stephen Glass. When Mike Kelly is fired as chief editor of TNR, he is replaced by someone from the ranks, Chuck Lane (Peter Sarsgaard). The appointment is not taken well by the charismatic Kelly’s loyal staff and they won’t help Lane when he raises questions to Glass on his story, “Hack Heaven.” Chuck feels there is something wrong with the story about a savvy teenager who extorted a tidy package from one of his hacked victims, a software company. He is greeted by a worried “Did I do something wrong?” from his young colleague and Lane is mollified by Glass’s assurance that everything he wrote was checked and double-checked. But, others have questions about the story, too. Adam Penenberg (Steve Zahn), the star reporter for the on-line publication Forbes Digital Tool, and his editor Kambiz Foroohar (Cas Anvar) begin finding holes in “Heaven” and raise their questions to Chuck Lane. When Lane puts Glass on the spot the reported promises that it is all in his notes at home. Panicked, Stephen begins to build a fragile house of cards based on lies and fabricated information – phony business cards, a fake website and other obstacles are constructed to deflect attention from the falsity of his story. As the facts become clear, it is obvious to Lane that his popular reporter has manufactured his detailed article from the air with almost nothing based on fact. Glass imagined people and places, conversations and quotes and wrote them all as the truth. Suddenly, Lane is faced with a scandal that can only hurt his publication and he orders his staff to look into the other stories that Glass had written. In the end, it became clear that Stephen Glass made up all or some of the facts in 27 of his 41 articles for The New Republic as well as tainted stories for his freelance pieces to Rolling Stone and others. Glass’s story, all the more fascinating that it is true, tells how one bright, unscrupulous young man – liked by all that know him – can shake the very roots of a profession that has always seen itself as upright and honest. If one reporter tells nothing but lies, they fear the public may think, maybe all reporters do. It’s frightening that someone who hasn’t reached the tender age of 30, yet, can wield so much clout with his fabricated written word. Hayden Christensen does a solid job in portraying the bespectacled, squeaky clean young Stephen Glass. Always attentive with compliments – “Did you lose weight?” or “I love your outfit!” roll of his tongue almost automatically in the office – Glass uses his humble routine as a cover to hide his true nature. Christensen plays this modest, aw shucks character well as we learn of Glass’s bed of lies. He garners sympathy for Stephen even as we learn of the terrible damage he inflicted on the integrity of the fourth estate. Peter Sarsgaard is outstanding as Chuck Lane and is the best thing in “Shattered Glass.” Lane is shown to be a practical man that understands the difficulty in filling the sizable shoes of Mike Kelly as TNR chief editor. But, he can also sense when something is not quite right but since he believes in the integrity of his profession he thinks that everyone does, including Stephen Glass. Sarsgaard plays Lane intelligently and shows that he is able to throw off the rose-colored glasses and expose the corruption in his own house. Best supporting actor attention should come the actor’s way. The rest of the cast gives capable support to the principals. Hank Azaria is sympathetic as Mike Kelly and he quietly reflects the sadness of the man as he vacates his influential office at TNR. Chloe Sevigny and Melanie Lynskey, as Stephen’s duped fellow writers, Caitlin Avey and Amy Brand), represent the trusting, intelligent people who fell for Glass’s fabric of lies without question. Steve Zahn proves, again, his versatility as Adam Penenberg, the on-line reporter who first smells a rat in Glass’s work. Billy Ray, the writer, does a deft job of storytelling with his fast-moving screenplay. He does not attack his subject, Glass, but doesn’t try to apologize for the reporter’s shameful behavior either. Ray tells a story that reinforces the absolute necessity that the legitimate press take the responsibility to guard the truth at all costs. Billy Ray, the director, does a solid job his first time at the helm. He benefits from the talents of his technical crew with Mandy Walker lensing things nicely in cool color tones and production designer Francois Seguin capturing the look and feel of the dynamic, fast-moving office space of TNR. “Shattered Glass” leaves me with a sober feeling about the future of news reporting. The explosion of the information superhighway has made manipulation of data a snap and the concept of “truth” comes tenuous. Let’s hope that Ray and company rekindle our faith in journalism.