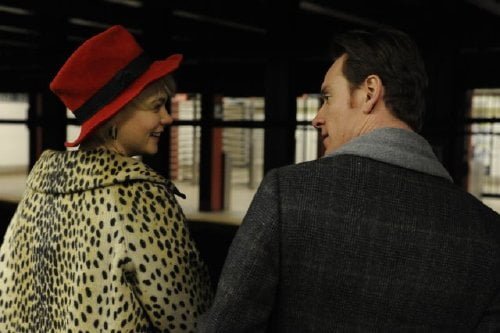 Brandon Sullivan (Michael Fassbender) has a dark secret that he hides from those around him. He is a sex addict. His secret stays safe until his sister, Sissy (Carey Mulligan), shows up on his doorstep with the prospect of an extended stay. For Brandon, this means he must hide his “Shame.”

Brandon Sullivan (Michael Fassbender, "Jane Eyre," "A Dangerous Method") is a successful man in New York City who lives in a sterile apartment and keeps no personal items at work. He cats around at night with his married boss, David Fisher (James Badge Dale, AMC's 'Rubicon'), is addicted to Internet porn and pleasures himself at those times in between. But when Brandon's emotionally needy sister Sissy (Carey Mulligan, "An Education," "Drive") crashes his pad after weeks of avoided phone calls, Brandon might actually begin to feel something like "Shame." This sophomore film from cowriter (with Abi Morgan ("Brick Lane")/director Steve McQueen ("Hunger"), shows the British artist has a predilection for extremes (the IRA hunger strikes of his first film, sexual addiction and abuse here), the Irish/German actor Fassbender and exquisite visuals. Put together with a series of long takes (cinematography by Sean Bobbitt, "Hunger") accompanied by a funereal score by Harry Escott ("Hard Candy," "The Arbor"), "Shame" will frustrate those who like their narrative spelled out but reward those who can stick with an ambiguous, artsy character study. The film's NC-17 rating and the much remarked upon package that Fassbender packs have given it a notoriety, but it is not the more flagrant aspects of the film which inform. One can only wonder at the number of attractive women apparently ready for quick, anonymous, public sex living in Manhattan. Brandon is an extremely well dressed, well groomed handsome man who otherwise doesn't try to call attention to himself, and yet, women notice. In one of the film's most riveting scenes, he notices a woman (and we notice her wedding ring) on the subway (Lucy Walters, in the type of tiny role that made Suzanne Somers memorable in "American Graffiti") and, under his gaze, she begins a heated, clothed seduction. (She'll return, the change in her wardrobe signaling all.) When Brandon goes out with David, David tries hard, but it's Brandon who scores, picked up off the street by the woman (Elizabeth Masucci) David tried to hit on. Alone at home, he walks about naked and obsesses with the same twisted porn his boss assumed his intern had accessed at work ('your hard drive's filthy'). 'Pick up, pick up, pick up,' says the only voice who ever calls and who is left unanswered. When Brandon returns home one day to hear Chic's 'I Want Your Love' reverberating throughout his flat, he picks up a baseball bat, but what he finds is his sister in his shower. Sissy is the key to Brandon's psyche. Where he is remote, she is clingy. Where he is self-reliant, she is dependent. Where he has some unexplained office job, she's an artist. When he takes David to see Sissy sing (an extremely slow, poetic rendition of 'New York, New York'), the two end up falling into his bed together. Disgusted, he goes running (in a very long tracking shot away from his apartment). It is of interest that Brandon and Sissy are never in a conventional front-facing two-shot. When together on his couch or a subway platform, they're shot from behind. When we first meet Sissy we see her nude body reflected via his bathroom mirror, him facing her from a side perspective. It is not until the end, when the two are posed like a modern day pietà, that we see the siblings together head on. McQueen also reverses that running tracking shot later in his film after a climactic evening that is a downward spiral of debauchery - what once caused Brandon to flee might just rescue what's left of his humanity. There are two conversational hints as to just why the Sullivans are so messed up. At one point, Brandon tries to engage in a conventional sexual relationship with Marianne (Nicole Beharie, "American Violet"), a coworker. He tells a childhood tale about how he received a head injury that we can sense is a cover story. Later, Sissy reminds him that they are not bad people, that they just came from a bad place (insert New Jersey joke here). "Shame" is a character study about a severely damaged man who drowns out the world with sex in an entirely different way than his sister does. It's a vision of anonymity in a blue gray New York where howls of pain may only be heard by those you refuse to answer.

Brit director Steve McQueen made a remarkable debut with his taut drama, “Hunger,” about the death of Irish republican Bobby Sands while a prisoner in a Northern Irish jail. His follow up takes a whole different direction in its character study of a man obsessed with sex. “Shame” begins with Brandon on a NYC subway train as he attracts the eye of a pretty, obviously married young woman. He flirts with her and follows her as she disembarks the train but loses her in the crowd. The lost opportunity is soon forgotten as we watch the man consorts with hookers, bar pickups and himself with his frequent bouts with autoeroticism. “Shame” is not for the prudish or sensitive as it unabashedly (it is rated NC-17) shows a man whose sole thought, morning, noon and night, no matter where he is, is sex, sex, sex. Early on, we learn that Brandon’s work computer is just one of his outlets for his obsession with all things pornographic. His problem, though, is he is unable to have a normal relationship with a woman, personified when he goes on a date with an attractive secretary, Marianne (Nicole Beharie), and he is unable to perform with her in bed. Michael Fassbender gives an over the top performance in his study of Brandon. Some may consider it best actor worthy (I have not decided, yet), but all who see ”Shame” will agree that his is a daring portrayal. Carey Mulligan again proves that she is a talented actress as Sissy. Without a lot of back story, she fleshes the character out to become as complex and troubled as her brother. Director and co-scribe McQueen (with Abi Morgan) pulls no punches with his tome of addiction. It could have been, as easily, about a man addicted to drugs or alcohol but the filmmaker makes the bold move to address the subject of compulsive, anywhere and anytime, sex. The subject matter and NC-17 rating is going to limit the film’s viewers but those who are brave will see the work, behind and before the camera, of two courageous talents – McQueen and Fassbender.