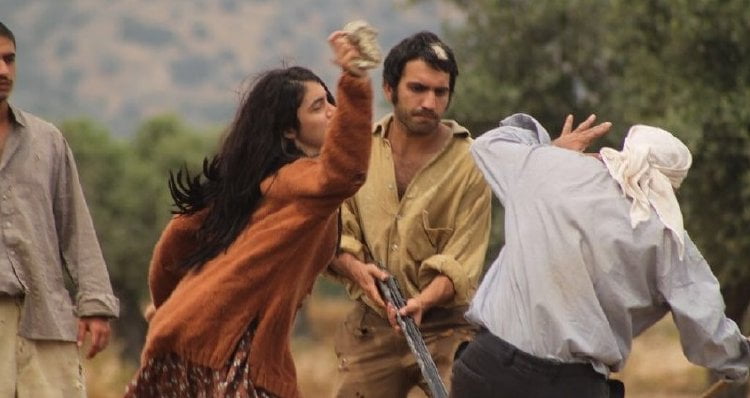 During the decades before 1963, in Cyprus, under British rule, there existed a somewhat peaceful coexistence between its Greek Cypriot majority and Turkish Cypriot minority. This peace fell apart when the English decided to give the island its independence and outside forces (Greece and Turkey) tried to control the island and its politics. The plight of the minority Turkish Cypriots during this time of turmoil is told in “Shadows and Faces.”

In 1955, Greek Cypriots unified for armed struggle for union with Greece, but the Turks who also inhabited the British ruled island were threatened, beginning a long struggle between the two peoples. When Ruhsar (Hazar Ergüclü), a Turk, is separated from her father Hristo, a Karagöz shadow play master (Konstantinos Gavriel, the Turkish Zero Mostel), she must learn to distinguish between "Shadows and Faces." ("Gölgeler ve suretler") Turkish Cypriot writer/director Dervis Zaim illustrates the conflicts of his homeland through the fictional tale of how the actions of Veli (Osman Alkas), Hristo's brother, and his friend Anna (Popi Avraam), a sympathetic Greek woman, spark a far reaching and deadly conflict. For those who know little about Cyprus, Zaim helpfully provides a brief current history before beginning his action. The film works as an introduction to the Greek/Turkish conflict and Zaim knows how to construct a powder keg and set it off, but his overt symbolism and 'Romeo and Juliet' subplotting around the character of Ruhsar are all too obvious and cliched. Still, if Zaim is determined use his shadow puppet master to represent political shadings, one must admire his technique using light and shadow.

Cypriot writer-director Dervis Zaim shows the conflict through the eyes of a village elder Veli (Osman Alkas) as he tries to keep peace in his small community set upon by Greece-supported police. He is thwarted at every turn by the Greek outsiders and Vali must turn to a local Greek Cypriot leader for help to save his older diabetic brother and his daughter from the new oppression. The viewpoint, though, gives a lopsided look at the conflict. The Greeks range from good and upright to absolutely evil. The Turks, on the other hand, are uniformly good. The writer-director wears his Turkish Cypriot heart on his sleeve in his earnest telling of a pivotal moment in his country’s history. His view is biased but it is also an honest portrayal of people in time of conflict. The story is not familiar to most people – I was an adolescent American kid at that time so war, any war, was always fascinating reading – and is a good window into the time. Unfortunately, “Shadows and Faces” will have a limited audience and I doubt that the local megaplex will screen it any time soon.