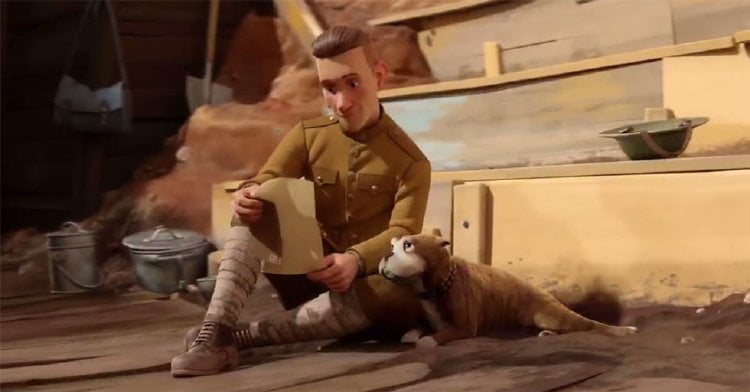 A stray mutt takes a liking to brand-new Army recruit Robert Conroy (Logan Lerman). What’s more, Conroy’s sergeant takes a liking to the plucky pooch and the little guy becomes unit mascot and, in the throes of WWI, “Sgt. Stubby: An American Hero.”

In the fall of 2017, Robert Conroy (voice of Logan Lerman) tosses a cookie to a stray dog on his way to boot camp in New Haven, CT. To his initial annoyance, the dog follows him there, but the talented terrier wins over the hearts of the young soldiers and even drill instructor Sgt. Casburn (voice of Jason Ezzell). When he ships out for the French front, Robert is astonished to find the dog has found him once again, but the terrier will surprise even more with his war exploits, becoming the first dog given combat rank and promotion in "Sgt. Stubby: An American Hero." cowriter (with Mike Stokey)/director Richard Lanni's background is with PBS's 'The American Road to Victory,' so a jump to family animation may at first seem odd. But he's found a real life American story from WWI, and while his approach shies away from the gore of war for his younger audience, he has (mostly) stuck to historical fact. Produced by the animation house behind "Captain Underpants," "Sgt. Stubby's" animation looks simplistic on the surface, but is finely shaded with character enriching detail and subtle color. It's a pity it didn't attract more attention during its theatrical release, but can now be enjoyed by everyone from elementary schoolers to their grandparents in the home. The film is narrated by Robert's sister Margaret (voice of Helena Bonham Carter), relating the experiences of her brother and his dog learned from the letters she receives at home. Lanni fills in the historical background with animated headlines and newsreel which provide high flying overviews, but the heart of his film is in the barracks and trenches. The smartest thing Conroy and his buddies, represented by the red-headed Elmer Olsen (voice of Jordan Beck) and German born Hans Schroeder (voice of Jim Pharr), do is teach Stubby how to salute, a trick that ensures his place on board their boat crossing the Atlantic (in reality Conroy smuggled the dog aboard, Stubby's precocious stowing away about the only gilding of the lily here). But once in the trenches, Stubby immediately makes himself useful, clearing it of rats. When shells hit, the dog is there to dig out wounded soldiers. He even corners a German and warns his 102nd Infantry Regiment of an incoming mustard gas attack. But the story is also Robert's and he gets an education from French soldier Gaston Baptiste (voice of Gérard Depardieu), who introduces him to wine and fine cheeses. Lanni's cannily made Gaston the human equivalent of Stubby, the soldier telling us 'I may not be beautiful, but I'm strong and lovable.' Lanni paints a sobering picture of the politics of war which demanded that these men go into battle even after the Armistice had been signed, a pointless waste of life. But "Sgt. Stubby" wraps on a high note, Stubby afforded a spot atop Patton's tank. Wisely, Stubby is portrayed as a dog and not an anthropomorphized cartoon character, his happily wagging stump of a tail beautifully animated. If the film has a flaw, it is in making Stubby's face a bit too generically cute, but that is a mere nitpick in such a fine family film. Grade:

You have to have a pretty cold heart if you do not come away from “Sgt. Stubby” with a smile on your face. This real-life story (look it up) about a little hero dog on the front lines in France during the Great War is heart-warming, tense funny – and as far as I can tell, true. Of course, the filmmakers sanitize the inherent violence and death in battle and concentrate on the warmly told dog and his boy tale, making it something that older young kids will enjoy – especially those who like adventures. Once little Stubby, and Conroy of course, make it through Army training, they are ordered to France (well, Stubby stows away) and enter the harrowing, years-long war. The Americans are taken under the wing of the veteran French soldiers and Conroy and Stubby meet Gaston (Gerard Depardieu), a gregarious chef-turned-soldier who mentors his two wards. The buddy friendship between the “three musketeers” makes for sentiment and much humor, but it is the exploits of our little hero that we want to see and the director, Richard Lanni, and his animation and storytelling crew, give a good accounting. It makes me wonder why it took Hollywood so long to mine the naturally good-hearted true-life adventure story, and it is about a diminutive dog!