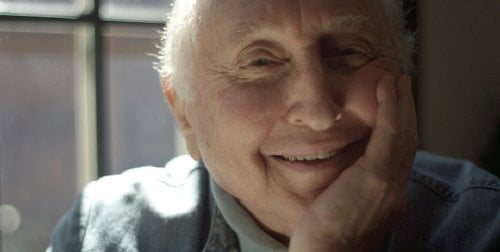 When Ethan Hawke met former concert pianist now teacher Seymour Bernstein at a dinner party, he was drawn to the man, whose attitudes about his talent and teaching its craft is also a philosophy for life. Hawke decided to take on his first documentary, "Seymour: An Introduction." Now here's a music teacher who cautions students about 'rushing,' but whose ideology on teaching piano is to 'encourage and nurture an emotional response, not just to music but every aspect of life.' Seymour's as meticulously demanding as "Whiplash's" Terence Fletcher, but his students love, not fear, him. Hawke begins by showing Bernstein teaching a series of students in his tiny, cramped NYC apartment, then broadens his scope with direct interview, a Master Class, conversations between Bernstein and former students, a direct-to-camera address, and the pianist's selection of an instrument in Steinway's basement. Archival photos, newspaper articles and musical montages accompany his subject's words. Seymour's history is unusual. As a young child, he yearned to learn piano seemingly out of the blue. During the Korean War, after discovering a fellow soldier was a violinist, he pitched a concert to his superior. The guy was doubtful, but the classical performance was a big success, resulting in a tour of the front line. Seymour believes his training as a musician gave him the fortitude for long marches, although it did not allay his fears. He suffered terrible stage fright, but even after his first public professional appearance earned a rave review from a tough critic, Bernstein was wary of musical stardom, explaining that what is required to attain one's art is so at odds with existing in society that it creates neurosis, offering Glenn Gould as a prime example. (Bernstein clearly dislikes the music industry, although he doesn't go into specifics.) Hawke may have an odd cutaway here and a dubious example there (the Beatles on the Ed Sullivan show for experiencing ecstasy through music? More like teenaged lust...their concert appearances were known for not being heard), but most of his choices are great. Watching Bernstein put away his folding bed informs as to his character, a conversation about B-Flat emanating from a Black Hole folds into his belief that music is an extension of ourselves. The director's appearance in his own film is used to apply Bernstein's musical teachings to his own art of acting as well as life itself. In fact, the director's taken his own experience with the man and not only shared it, but elucidated it on film. Then there is the music, of course - Beethoven, Chopin, Bach. "Seymour: An Introduction" builds to a performance sponsored by Hawke in Steinway Hall, Bernstein playing a composition he calls one of the greatest, a piece written by Schumann for his bride, Clara. He's transported, as are we. Grade: