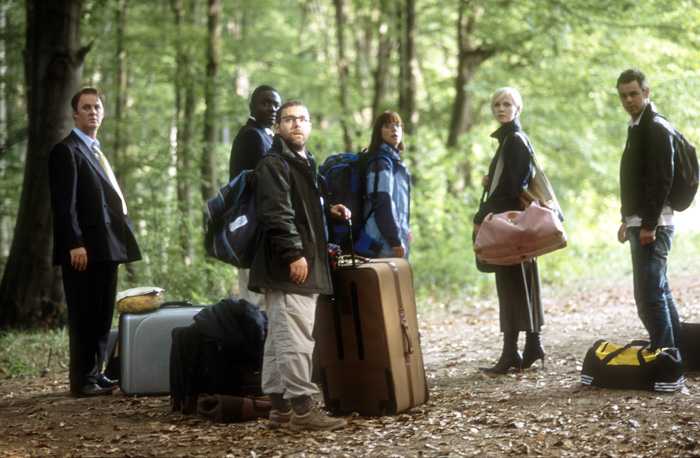 The crack sales team for arms-dealing mega-giant Palisades Defence are sent, by their appreciative CEO, to Hungary for a luxury vacation and morale builder. But, when they discover the remote road to the lodge blocked they are stranded by the bus driver and have little choice but to proceed on foot. They finally arrive at the lodge, though it is definitely not the lap of luxury they were promised. The group tries to make the best of it but there is evil lurking in the woods around them and they must face life or death in Severance.”

You know that this is not your average faceless killer slasher movie from the opening moments as, separately, two bimbo babes and a middle-aged man run from some unseen horror. What makes it different is the dopey elevator music score that accompanies the chase. Right there you know that director Christopher Smith, adapting with author James Moran his original story, is not out to be taken seriously. Instead, you know that you are about to go on a ride that encompasses comedy, horror and thriller genres. (The use of the pop classic, Ichy Coo Park,, right after the tongue in cheek opening, is also a giveaway to the filmmakers intent.) The adventurers settle into what is decidedly not a luxury lodge and bicker about what to do next. It is almost 30 minutes into “Severance” before something even remotely creepy happens and, at this point things ramp up pretty fast. Two of the team-building party walks off to get help and find the bus they came in spattered with blood on the side of the road and the driver butchered nearby. They head back to warn their colleagues only to find them in the middle of a bear trap minefield with one of their number severely maimed by one of the traps. The group knows that they are in the middle of a life and death struggle. What separates “Severance” from the typical slice-and-dice slasher flick are two things: the fight back attitude of the victims toward the faceless killers and the plethora of humor that pervades the film from start to finish. The combination of gut-wrenching mayhem and mutilation and comedy make for a treat for horror/thriller fans with a sense of humor. The gags (no pun intended) are well set up and every one that is foreshadowed is played through to satisfaction. The story is peppered with inventive demises of the intrepid travelers, from execution-like deaths by fire and beheading to the selfless sacrifice by the sales team leader, Richard (Tim McInnehy), trapped when he steps on a land mine (manufactured by Palisades Defence). Death is done with imagination as it is metered out, in equal parts, on both friend and foe. The Brits have been coming up with some creative horror films, both serious and humorous, for a while now with the likes of “28 Days Later,” its recent sequel, “28 Weeks Later,” and the very amusing thrill ride of “Hot Fuzz.” “Severance” continues this push of the creative. It does not hurt to have a scantily clad babe wielding an AK47.