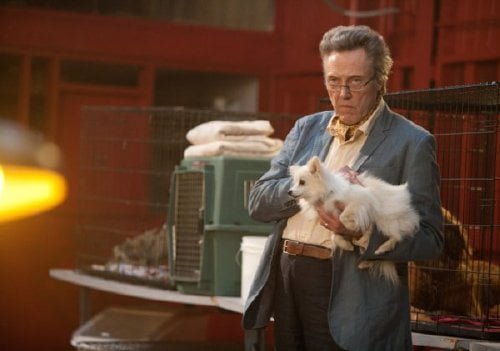 Marty (Colin Farrell) is a screenwriter struggling to find his screenplay. His constant drinking, though, keeps the ideas from flowing until his friend, Billy (Sam Rockwell), an out of work actor and dognapper, comes up with some ideas of his own. But, when Billy steals the beloved shih-tzu of a loose-cannon gangster, Charlie Costello (Woody Harrelson), the screenplay becomes real with its “Seven Psychopaths.”

Martin (Colin Farrell, 2012's "Total Recall") is an alcoholic Hollywood screenwriter who doesn't think he has a drinking problem having a problem getting going on his latest script. He has a title, but it's very concept negates the fact that he wants a Buddhist version. Enter his actor buddy Billy Bickle (Sam Rockwell, "Moon") who wants nothing more than to help shape a movie, but Billy's side line, kidnapping dogs for ransom, ends up bringing Martin's subjects right to him, just like he specified in "Seven Psychopaths." Writer/director Martin McDonagh tries his hand at an "Adaptation"-like deconstruction with his "In Bruges" star Colin Farrell acting as his stand in, but while early goings are fun, the film never feels like it fits together properly and implodes under ideas run amok. Revelations begin to spin around upon themselves, characters double down and split apart and the conjectured extended talky climax ends up being just that in service to McDonagh's ruminations on writer's inspiration. If Christopher Walken weren't so damn good in this, it would risk becoming a forgettable exercise. Walken's actually a first among equals here, at least among the male actors. As women are lamented as not being very fleshed out and easy targets, that is, of course, their destiny here with only Gabourey Sidibe ("Precious") making the most of a bad situation. Abbie Cornish ("Bright Star," "Sucker Punch") is wasted in an over-explained but underwritten role as Martin's girlfriend and Olga Kurylenko ("Quantum of Solace") isn't up to the task despite being one of the titular seven (her Bond girl status is the in joke here). And Bonny the ShihTzu isn't as much of a visual gag as one would expect. The film opens with one of many cinematic meta-references as 'Boardwalk Empire' costars Michaels Stuhlbarg and Pitt discuss an upcoming hit and the logistics of shooting someone through the eye. From behind them approaches the ski-masked Jack of Diamonds killer who dispatches them, both bloodily pitching towards the camera. This, we're informed, is Psychopath #1. Martin and Billy read about the incident, but Martin's still wrapped up in making a movie about peace and love. With psychopaths. We've witnessed Billy's boss Hans (Christopher Walken) with his gentle approach towards dog-napping. Returning it based on 'Lost' ads, he accepts a reward reluctantly, sometimes leaving without one. Then Billy steals the wrong ShihTzu, as its being walked by Sharice (Sidibe). Turns out it's really owned by Charlie Costello (Woody Harrelson), a brutal maniac whose only emotional attachment is to his pooch Bonny. Martin witnesses first hand a double hit in search of the dog which Billy refuses to return. With the psychopath count going upward, Billy writes an ad for one and up turns Zachariah (Tom Waits) and his white rabbit with tales of a 'Dexter' like existence with a woman who sounds a lot like Hans's wife, Myra Kieslowski (Linda Bright Clay). Maybe you've recognized some cinematic names here, like the late great fatalist Polish director, half of a comedy duo and "Taxi Driver's" Travis. McDonagh's going for a very meta film, but the movie references feel slap dash, inconsistent. With Martin, we see how stories told by others - namely Billy - work their way into his work until he thinks they're his own. Until these stories keep springing to life in front of him as their subjects come into play. But how can Hans have a wife who was partnered with Zachariah? And how did the story of an Amish preacher (Harry Dean Stanton, "Repo Man") first told by Zachariah circle back to Hans? If they are one and the same, how are they both in the 'reality' part of the picture? And just what's up with Billy Bickle's vintage doll decor? The action is fast paced and often laugh out loud funny, its off-handed and very bloody violence part of the dark humor. But once everyone goes into the desert to hash things out, interest wanes and even if that in and of itself is meant as yet another cinematic reference, which it indeed is, the cumulative effect isn't one of a tightly thought out film, even if McDonagh allows Hans to work one of Martin's fictions, a schopathic Vietnamese Priest (Long Nguyen), back into the narrative with peace and love. Walken walks out of the picture on water, but the movie around him evaporates.

This is the sophomore follow up film for director Martin McDonagh and is a little disappointing after his striking crime comedy “In Bruges.” With “Seven Psychopaths,” it is a case of being far too ambitious with its huge ensemble cast (the “Seven” of the title should give a clue). So many characters require a deft, experienced hand at the helm and McDonagh has not achieved that level of experience, yet. There are some very good elements in the film, particularly a terrific performance by Christopher Walken as Hans, Billy’s suave partner in the dognapping ring. The story, by McDonagh, has many threads, too many, and this is another problem. Marty, the ostensible lead figure of the film, is an alcoholic writer who cannot write anything beyond the title for his script, Seven Psychopaths. Friend and conman Billy has some really good ideas and the pair team up to flesh out the nonexistent screenplay. When Billy mistakenly steals Costello’s beloved dog, Bonny, he sets into motion what will be the ultimate shootout ending for the “Seven Psychopaths.” With so many psychos to follow, only a few are given any depth. Walken, as the sophisticated, assured dog thief, and Rockwell, as crazy guy Billy, fare best while others, like Farrell as the bemused, confused and oft-inebriated writer, or Tom Waits as Zachariah, the rabbit carrying psycho interviewee, fare less well. Wood Harrelson, as crazy Charlie, gives his usual amusing solid performance as a lunatic gangster. Over ambition seems to be the trend, lately, for filmmakers the second time out the gate. McDonagh is joined by others, like Lee Daniels (with “The Paperboy”) and, while I appreciate the effort to broaden horizons, you should go with what you know.