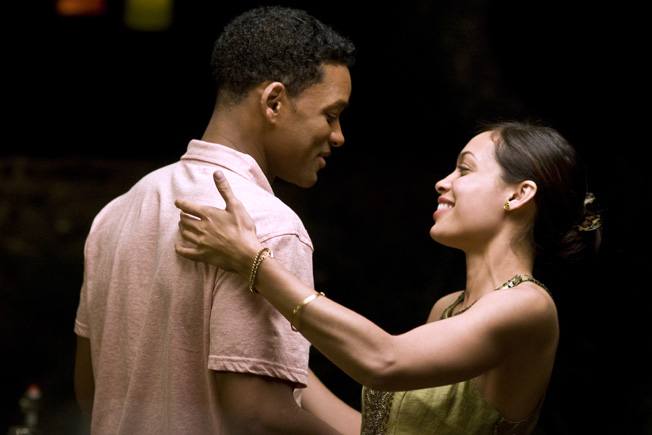 Ben Thomas (Will Smith) makes an emergency 911 call to report a suicide. When the dispatcher asks who the victim is, he responds with “I am.” Thus begins a tale of guilt, love and sacrifice in “Seven Pounds.”

Not to give any spoilers but good grief - a jellyfish?

Director Gabriele Muccino worked with his star, Smith, before in the pluck-at-the-heart-strings “Pursuit of Happyness.” That film was a string of unrelenting misfortunes put upon its lead, but there was a happily-ever-after ending to redeem the relentlessness. “Seven Pounds,” though, does not let up on it unremitting mood of the suffering that Ben lives under after a single lapse that ended in the death of seven others. Will Smith gives an earnest performance as an enigmatic man who is not what he seems to be. The actor, I think, is best in his sassy comedic roles. His serious film characters have a single dimension and, in “Seven Pounds,” no emotional development. Smith starts out and finishes without giving us any change of character. First time feature scribe Grant Nieporte’s script wears its heart on its sleeve (no pun intended ­ if you see the film you will know what I mean) but also has a hopeless feel. There is nothing feel good in a film that is about love, sorrow and sacrifice. This is a problem.