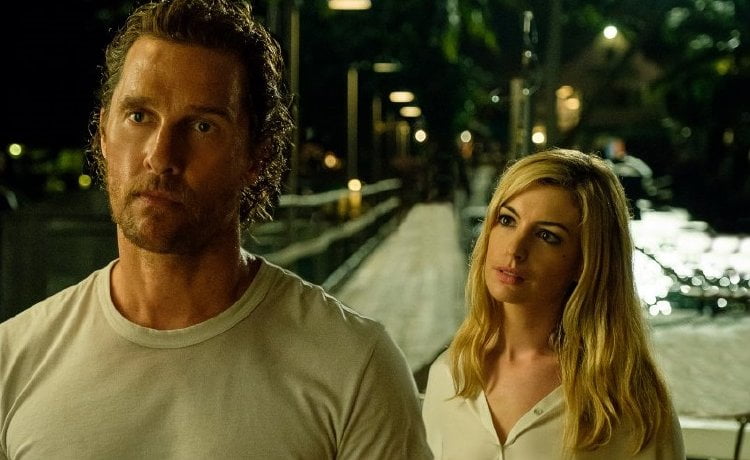 Fishing boat captain Baker Dill (Matthew McConaughey) leads a laid back life on Plymouth Island chartering tours. But he has a mysterious past, and it catches up to him when his ex-wife Karen (Anne Hathaway) hunts him down and offers him $10 million to take her abusive new husband (Jason Clarke) out to sea and dump him off the "Serenity."

Fishing boat captain Baker Dill (Matthew McConaughey) leads a hand-to-mouth yet laid back life on Plymouth Island chartering tours. But he has a mysterious past, and it catches up to him when his ex-wife Karen (Anne Hathaway) hunts him down and offers him $10 million to take her abusive new husband (Jason Clarke) out to sea and dump him off the "Serenity." Watch the trailer for "Serenity" and you might expect a Caribbean "Body Heat," but writer/director Steven Knight ("Locke") has something entirely different up his sleeve. Unfortunately, his 'big twist' may be apparent to most viewers pretty early on and its ofttimes laughable execution undercuts its tragic situation. "Serenity" takes his basic "Locke" premise of a man's moral journey as he travels away from one woman towards the distressed mother of his child and gives it a conceptual treatment that smells fishy from the get go. Right off the bat we're given something we weren't expecting. Out on a fishing charter with two customers bleary with beer, Baker notes a frigate bird flying overhead. Then one of the lines tugs. Ignoring the men who've paid him handsomely, Dill orders his mate Duke (Djimon Hounsou) to strap him into the chair, intent on hauling in his own white whale, a giant tuna he refers to as 'the beast,' but has named Justice (the fish is seen as a mammoth shadow, recalling "Jaws"). He and Duke get the fish all the way up to the boat only to lose it and his day's income. Fortunately Dill's got a lover, Constance (Diane Lane, utterly wasted), used to bailing him out. There is also a fishing supply salesman, Reid Miller ('Succession's' Jeremy Strong), who keeps arriving on piers dressed in a suit with a briefcase seconds too late to catch Dill. He's the first oddity in this misconceived film, the next being Dill's apparent psychic link to his son, Patrick (Rafael Sayegh), whom he sees during his daily nude dive into the sea. Later, he will awaken from an apparent nightmare, water dripping beside him as we witness Patrick at his usual station in front of his computer screen, a puddle of water on his desk. When this film's femme fatale, Karen, arrives, she tells Dill (whom she calls John) that Patrick 'hears everything you say to him.' Their tryst, which seems suicidal after we've witnessed the depths of Frank's (Clarke) depravity, is so over the top as to invite tittering. Hathaway's over emoting aside, the actors do their part here, the actress portraying bait and tackle shop owner Lois making a particularly strong impression. The production is also fine, Plymouth Island the type of off-the-beaten path Caribbean paradise featuring everything from Dill's converted shipping container abode to a luxury hotel, its waters aqua with endless horizons. But Knight, whose "Locke" set expectations high, just hasn't found the right entrance to his high concept. It seems silly, until it doesn't, the expected closing credit updates at once chastising us for our misplaced amusement and muddying those clear blue waters with information at odds with what we have just seen. Grade: C- Robin: Robin gives "Serenity" a