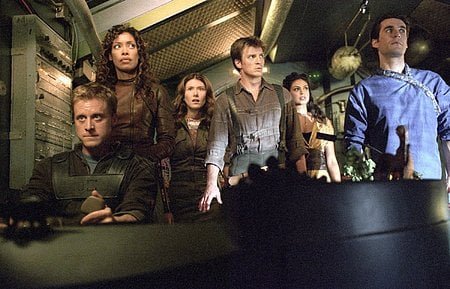 Captain Malcolm ‘Mal’ Reynolds (Nathan Fillion) is a veteran of the galactic civil war but, unfortunately, picked the wrong side. Now, with his tiny but loyal crew, he cruises the outer planets committing the odd crime and renting out his aging spaceship. His latest passengers, though, spell trouble and Mal and crew find themselves stuck between the forces of the militaristic Alliance and the cannibalistic monsters called Reavers in “Serenity.”

Captain Mal Reynolds (Nathan Fillion, "Dracula 2000") and his crew are free-lancers taking jobs as they come. They're also what the governing Alliance consider 'outer planet savages,' having been on the wrong side of the wars years before. Mal makes the decision to take two refugees on board, Simon (Sean Maher), a doctor, and his strange sister River (Summer Glau), an experimental subject of the Alliance whom they want back at all costs. Their presence will endanger the one thing Captain Mal puts above all others - his ship, the "Serenity." Writer/director Joss Whedon (TV's "Buffy: The Vampire Slayer," "Firefly") has a rabidly devoted fan base, many of whom still lament the cancellation of his "Firefly" series after only fifteen episodes in 2002. Those fans have been lining up for pre-screenings of "Serenity" since early May and their excited buzz has been over the moon. For the non-fan, "Serenity" is a decent sci-fi'er more interesting for its characters than its plot - certainly not a bad thing - but it certainly shows its roots in television from its visual composition to some cheesy effects. Hopefully "Serenity" the movie will be successful enough to convince a TV exec to put the series back where it belongs. The film's prologue establishes River as some sort of mind control subject with artificial memories of a teacher that become jumbled when she rebels ('We meddle' she tells the teacher, who responds 'We don't tell them what to think, we teach them how.'). Simon breaks her out of the lab and gets them aboard Serenity, but Serenity's crew is wary. All, that is, except for ship's mechanic Kaylee (Jewel Staite, TV's "Higher Ground") who has a yen for the serious minded doctor and who hasn't 'had anything 'tween my nethers that don't run on batteries' for too long. Meanwhile The Operative (Chiwetel Ejiofor, "Love, Actually," "Four Brothers") is as determined as The Terminator to retrieve the girl and he uses Inara (Morena Baccarin, "Roger Dodger"), the professional companion Mal has a serious jones for, as bait. Mal takes the bait with eyes wide open and gets away with his girl, but The Operative goes on the offensive, decimating Serenity's safe havens. By this time, the crew has discovered that River is some sort of programmed assassin, and the word she mutters when she's switched 'on,' Miranda (as in Miranda Rights, one may suppose), may be the clue to finding out why the Alliance is so desperate to retrieve her. It doesn't take a great leap to deduce that River is somehow connected to the Reivers, cannibalistic space vampires who ravage the outer planets and who come into play early onto to reappear in the film's climax. But "Serenity" is really all about the group dynamics of its crew, a wisecracking bunch who act like hardened mercenaries but who are all quite fond of one another. Nathan Fillion, who has the same ferrety good looks as "Queer As Folks'" Gale Harold, is chief among the quippers, but he gets as good as he gives. Comparisons to Hans Solo would not be inaccurate. Other returning "Firefly" crew members, besides the aforementioned Staite as country girl Kaylee, are his right-hand man Zoe (Gina Torres, "The Matrix Revolutions"), her husband and ship's pilot Wash (Alan Tudyk, "Dodgeball: A True Underdog Story") and the group's brawn Jayne (Adam Baldwin, "The Patriot"). They're a well-oiled ensemble, a bunch of rough-around-the-edges adventurers well suited to their ship (Serenity is a bit of an endearing clunker, looking like a four-legged bird when it lands). David Krumholtz ("Harold & Kumar Go to White Castle," TV's "Numb3rs") is Mr. Universe, an allied satellite knowledge bank and hacker extraordinaire who lives happily with his sexbot. Warning for the uninitiated - these "Firefly" fans can be a scary bunch. I sat in front of a woman who was laughing with such maniacal force it was as if she was single-handedly trying to make the movie work. Pushing something too hard can backfire and Whedon's fans would have you believe "Serenity" was the second coming. It's not. But it is entertaining and has likeable characters. I hope it gets its TV slot back, for their sake. I might even watch.

Fans of the aborted TV space oater, “Firefly,” have been chomping at the bit since their favorite program was pulled from the air after only 11 of its 14 episodes played on the Fox network. When creator Joss Whedon announced his directorial debut with a feature length version of the revered TV series, the fan base was all a-twitter. They have even gone so far as to pay out good money to see Whedon’s work in progress months ago. Serenity,” for the uninitiated, is a good-natured space western about Captain Mal and his merry band of outcasts who rob the Alliance and give to themselves as they also ply their ship-for-hire trade on the remote edges of the galaxy. Their hi-jinx carry an element of danger but nothing that Mal and his team can’t handle – until they agree to take a mysterious doctor, Simon Tam (Sean Maher), and his strange, beautiful sister, River (Summer Glau), on board their ship, the Serenity. Unbeknownst to Mal and his eclectic crew, River is a telepathic fighting machine developed by the Alliance scientists in their bid to control the galaxy. Her brother, Simon, breaks her out of her prison and they take refuge aboard Mal rundown ship. Suddenly, the Serenity crew is caught between a very big rock and a hard place – the Alliance, who want the too-knowledgeable River back in their fold, and the Reavers, who prefer to eat their captives while they’re still alive. The Alliance has dispatched the deadly, relentless Operative (Chiwetel Ejiofor) to locate and return River, who knows far too much to be roaming free, to the clutches of her controllers. But, the Operative isn’t prepared for the crew of the Serenity who will do whatever they need to spirit River out of harm’s way. The fact that she is a one-girl army helps Mal and friends to do their good deed. Serenity” is an old fashioned western set in a galaxy far, far away. Oops! Sorry, that’s another space western that many, many more in number than the Firefly” fans have come to know and love. Joss Whedon’s first feature work is much more straightforward than George Lucas’s franchise and plays true to his source material. The creator of such TV icons as “Buffy the Vampire Slayer” and “Angel” tells a by-the-numbers tale that will have a great following by its ready-made fan base. For the uninitiated, like me, there should be some mild interest for those wanting to have some fun at the theater. The film stays true to its television roots and does not transcend its small screen origins with its routine special effects. “Serenity” doesn’t break any new ground, F/X wise, and puts its money into developing its smart aleck characters, amusing action and, as the fans hope for, a large dollop of humor added into the action mix. Nathan Fillion, as Captain Mal, ably leads the crew of the Serenity. He and the rest wear their characters like a set of comfortable clothes. The time spent making “Firefly” allowed the players to slide into the feature version with ease. Mal’s tiny but extremely loyal crew is capably led by second-in-command Zo Alleyne (Gina Torres), Mal’s comrade-in-arms and only other survivor from their fight in the civil war. She would give her life for her commander but he had better have a damn good reason, first. Zoë’s husband, Wash (Alan Tudyk), the hotshot pacifist pilot of the Serenity, is her opposite, eschewing fighting to make a little money and take a vacation. Providing the military muscle for the crew is Jayne Cobb (Adam Baldwin), a mercenary a little too concerned with getting paid and not someone you’d want watching your back if there is a higher bidder around. The heart of the crew is Kaylee (Jewel Staite), a sweet farm girl who is a genius with machines and she is in her element as she keeps the Serenity patched together and running. All in all, the ship has a good, able crew. Telepathic River, played with a strong, physical edge by Summer Glau, doesn’t have much by way of personality – the product of her lifelong control by the Alliance – but is just the person you want when in danger of being overwhelmed by the ravenous Reavers. Sean Maher earnestly plays River’s brother, Simon, an emotionless doctor, unless it involves his beloved sister. Chiwetel Ejiofor, an extremely capable and versatile actor (from playing the exiled physician turned taxi driver/hotel night manager in “Dirty Pretty Things” to his murderous gangster boss in “Four Brothers”), gives his nameless Operative the necessary cold, clinical attitude to make him the relentless instrument of the Alliance. Serenity” is, first and foremost, for the “Firefly” fans that were crushed when the Fox network canceled the beloved show. Having caught an episode in re-runs on the Sci-Fi Channel, it is easy to see why the fan base is so loyal to Whedon and his vision. Their hope, I believe, is that the movie will garner even more fans and Fox, or someone, will pick up the series and make a whole new slue of shows. I think, on the weight of the likable cast, fast-paced action and hard-edged humor, it is more likely that any success by Serenity” will spawn a sequel or two. Which it will if the fans can draw their non-fan friends in to see the feature. Word of mouth may well make “Serenity” a winner at the box office. It’s a good-natured sci-fi western actioner that entertains.