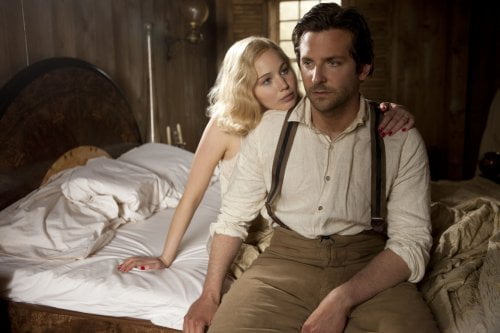 George Pemberton (Bradley Cooper) is an ambitious young man starting a logging business in the mountains of South Carolina. The Great Depression has hit the country and George struggles to not go under until he meets Serena Shaw (Jennifer Lawrence), the beautiful and capable daughter of a Colorado lumber family. Following their whirlwind courtship and marriage, the couple begins to build their empire, but there are cracks in the castle walls that will turn out badly for “Serena.”

George Pemberton's (Bradley Cooper) dream of trading in on his lumber company in the Smoky Mountains for a Brazilian paradise have been side tracked by the Great Depression, but when he marries, he finds a strong entrepreneurial partner in "Serena." The third pairing of Bradley Cooper and Jennifer Lawrence doesn't prove the charm in Danish director Susanne Bier's ("Brothers," "In a Better World") latest, an adaptation of the Ron Rash novel by Christopher Kyle ("Alexander"). It's a period story of unwed motherhood, barrenness, betrayal and murder whose animal symbolism (an eagle, a rattlesnake and a panther) is more fleshed out than its characters. Lawrence has dazzled time and time again on screen, but as the sociopathic Serena, she seems anesthetized, a sleepwalker with murderous intent and ill-defined back story. Cooper fares a bit better, although the 1930's aren't his most convincing era. Support (Rhys Ifans, Toby Jones, David Dencik, Sean Harris and Ana Ularu) is stronger than the main act. The production itself features stunning landscape photography by Bier vet Morten Søborg, but costumer designer Signe Sejlund's choice of apricot for a lumberman's shirt is perplexing. Grade:

“Serna” is neither good nor bad but is mired in mediocrity. On paper, it looks good: two A-list actors who have worked together before (“Silver Lining Playbook”) and a top-rated international director, Susan Bier. Bier is best known for her personal, family dramas (“Open Heart,” “In a Better World”) and this is her first time working an American period piece. “Serena” has the look of Depression Era South Carolina in production design, costume and is photographed expertly with an Ansel Adams quality by Morton Soberg, but other elements of the film - writing and acting - lacks any spirit or soul. The stars, and everyone of note in the film, are not given any real dimension or substance. There is little chemistry between the Cooper and Lawrence, mainly due to lack of character development before they enter into their empire-building plans. The almost slapdash setup to establish George and Serena as the perfect couple left me wondering what their attraction is – except maybe because they are the prettiest couple in the room. Much of “Serena,” at least in the first half, consist of softly lighted, sepia-toned love scenes between G and S, taking away from time that should have been used to make the narrative sharper. It seems obvious that, since “Serena” was completed in 2012, it has been sitting, for reason, in distribution hell. It is a nice looking film but lacks those qualities – good story-telling, direction and acting – that would elevate it above mediocre. As such,