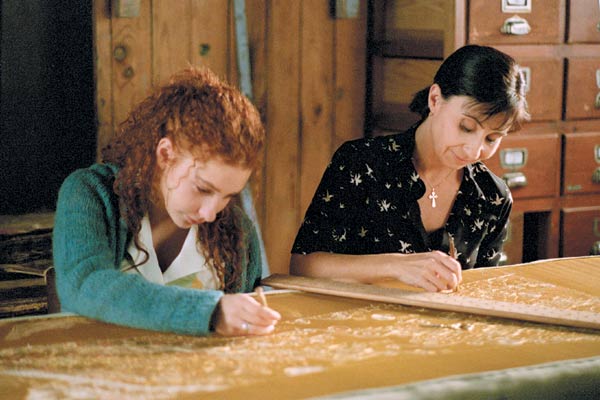 When supermarket checkout girl Claire (Lola Naymark, "Monsieur Ibrahim") discovers she's pregnant, she asks for an illness leave, tells her friends she has cancer, and takes her embroidery samples to the reclusive Madame Mélikian (Ariane Ascaride, "My Life on Ice") looking for work. Madame Mélikian, who is mourning the death of her son, wordlessly notes Claire's condition, and the beginning of a partnership forms as the pair work with "Sequins."

Cowriter (with Gaëlle Macé)/director Éléonore Faucher's film is a timeless, multi-layered affair of artistry, apprenticeship, friendship and love. "Sequins" is first and foremost about how the relationship between an older, grieving woman and her young, pregnant protege heals them both. Its quiet beauty, however, is a strong element, often evoking "Girl with a Pearl Earring" in its depiction of artists at work (and Claire's habit of binding her curly red hair in the style of the seventeenth century). Independent Claire has an unspoken rift with her mother, whose only assurance her daughter is well comes from the cabbages she finds missing in her field (Claire cuts the vegetables and trades them for rabbit hides which she uses in her work). She writes of her woes to her sister in Lyon and shows gruff affection for little brother Thomas (Arthur Quehen) who shows up at her rooms to visit. She does not name the father of her child, although we can guess it is the supermarket butcher (Christophe Hatey) who greets the news with an immediate denial of responsibility. Claire is intrigued by the older brother of her best friend Lucile Lescuyer (Marie Félix), who tells Claire that Guillaume (Thomas Laroppe) was scarred in a motorcycle accident, which took the life of his best friend, Ichkhan Mélikian. Claire's deferential application to Madame Mélikian is met with harsh appraisal, but the older woman opens with Claire's hard work and obvious talent and the younger woman's admiration of the intricate veil she's working on. Madame Mélikian confides that it is for Mr. Lesage (France's master embroider who has worked with all the leading designers) and that she has collaborated with Lacroix. She also knowingly comments that Guillaume is coming for Ichkhan's bike and that 'he praised you highly.' Claire arrives at work one day to discover her boss collapsed and calls an ambulance. Madame Mélikian is initially angered that the girl has thwarted her suicide, but Claire's devoted visits and continuation of their work brings her around. At a Lescuyer family celebration, Madame Mélikian counters a concern for her health by declaring the partnership - 'As a team we're stronger.' "Sequins" is a lyrical look at another way of life, one where craftspeople, farmers and merchants ply their trades like their forefathers before them. Glimpses of the modern world, seen mostly in early goings, are almost jarring given the timeless quality of the film's focal environs. A beautiful violin score adds to the classical, pastoral nature of the film. The camera loves the luminous Lola Naymark, whose elfish eyes and titian hair evoke the spark beneath her calm exterior. Ascaride colors her dark exoticness harshly at first, gradually allowing her love of life to return and paint her beautiful. The older woman's innate understanding of the younger is subtly played, a rejected observation about pregnancy becoming the film's romantic climax, a gift, almost, of Guillaume from Mélikian to Claire.

Teenaged Claire (Lola Naymark) is satisfied with her supermarket clerk job and, occasionally, pilfering cabbages from her parents' farm to trade for rabbit skins for her real passion: embroidery. But, she has one serious problem - she's pregnant. Her problem and her passion are both given safe harbor when Claire begins working for Madame Melikian (Ariane Ascaride), a woman grieving the loss of her son from a motorcycle accident and the pair forms a touching friendship in "Sequins." This is a lovely character study of the two main players and the relationship that grows between Claire and Madame M. Claire is a strong-willed young woman who refuses to succumb to the peer pressure that her pregnancy would cause if it became known. The unfortunate accident that took the older woman’s son is the catalyst that brings the two women together when Madame M agrees to let Claire work on her delicate embroidery, work that she does for some of the finest fashion houses in Paris. The young apprentice proves quite talented and she secures her job with her artisan mentor. First time helmer/scribe Eleonore Faucher, with co-writer Gaelle Mace, does a fine, delicate job telling a story of potential despair but one that, in the end, is full of hope. Lola Naymark has an incredible face and presence that enthralls the viewer with her odd beauty. The young actress gives the strong-willed Claire real dimension and strength as the girl makes the decision to see to the end the birth of her unborn child. She justifies her mistake in judgment – she is, after all, only 17-years old – by lying about her condition. Sympathy is easier to cope with than scorn and she convinces everyone that she has cancer. When she approaches Madame Melikian for embroidery work - the sequins of the title – the older woman sees through the girl’s deceit, recognizing the pregnancy immediately, but hires her anyway. Madame M is a true artist held in the highest esteem by the best of the haute couture houses in Paris, like La Croix, and produces embroidery work of the finest quality. She recognizes Claire’s very real talent, even presenting the girl’s efforts to her best clients. They too are impressed. But, the older woman’s sorrow is a palpable thing and she and Claire commiserate and help each other through their mutually trying times. Faucher tells this simple, sometimes sad story (with a positive, almost upbeat ending) of femme bonding with a gentleness that befits the filial relationship between Claire and Madame M. The younger woman really needed a friend in the face of her condition but the grieving Madame Melikian needs the girl even more when she attempts suicide over the loss of her only child. Claire continues Madame M’s work as the woman recuperates from her failed death attempt and the compassion between the two turns into a real friendship. Such a quietly paced story may not be for the average movie bear but “Sequins” is the kind of film that will appeal to its mainly femme target audience and film buffs, like me, who can appreciate a tale both well-told and well-crafted. Faucher’s straightforward direction is complemented by cinematographer Pierre Cottereau’s camerawork that feels influenced by lens meister Eduardo Serra (“Girl with a Pearl Earring”).. ”Sequins” is a lovely calling card for its maker and its stars.