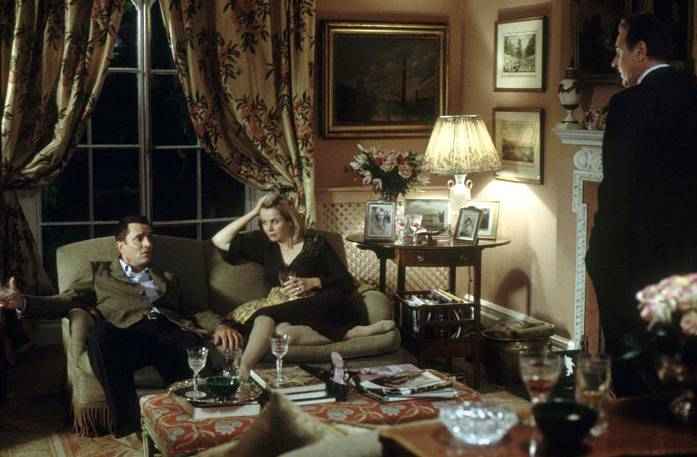 Prominent London solicitor James Manning (Tom Wilkinson, "The Exorcism of Emily Rose") becomes suspicious of his aristocratic country neighbor Bill Bule (Rupert Everett, "Shrek 2," "Stage Beauty") when the man's Range Rover sports a deep scratch on the same day a local man's been felled by a hit and run driver. But Manning's confrontation unearth's more than one secret and entangles a love triangle in a web of "Separate Lies."

Writer Julian Fellowes ("Gosford Park"), who adapted Nigel Balchin's novel 'A Way Through the Wood,' makes his directorial debut firmly entrenched in familiar territory when a wrongful death entwines the privileged upstairs with the working class downstairs. While the film has an underlying tone of humor, the break up of the Manning marriage is meant to be painful, and even though they are played by two of Britain's finest (Emily Watson of "Gosford Park" plays James's wife Anne), Fellowes' film doesn't quite engage. The whole thing's been pushed too far until you're not quite sure whether you're meant to be watching a drama, a whodunnit or a twit on England's wealthy. Still, it is a beautiful production with some fine acting moments. Anne Manning (Watson) is obviously bored in Buckinghamshire, waiting for her husband to tear himself away from his London office. When she spies Bill, recently returned from America, playing cricket, she pesters James into having a small cocktail party on a Friday. He arrives late once again, the party dispersed except for the one guest Anne devised it around, and James becomes annoyed when his slightly tipsy wife takes sides with Bill and his high-handed taunts. The next day, James is immediately piqued when their housekeeper Maggie (Linda Bassett, "Calendar Girls") calls to say she cannot come that day, but he regrets his judgement when he learns that her husband, Tom, has had a serious accident. And it is that accident that is the shock moment of the film's cheeky opening. Fellowes lulls us with his bucolic scenes of the English countryside (cinematography by Tony Pierce-Roberts, "De-Lovely") accompanied by chirpy feel-good music (score by Stanislas Syrewicz, "Extreme Ops"). Fellowes makes Anne's guilt obvious to the audience, but her lawyer husband appears to miss it until Anne, hearing that he intends to turn in Bule, cracks in the kitchen and admits to more than having had a hand in the misfortune of her housekeeper's husband. This scene is particularly well played between the two, as it delineates the small criticisms that have strained the marriage as well as unveiling crimes. However, James's complete moral about face and Anne's haste to admit cheating both arrive too abruptly. The pileup of lies which follow, as James finds himself covering for both his wife and her lover, are capped by an unexpected one from a fourth party which seems to have been psychologically orchestrated by the guilty parties, but then another secret is revealed which is supposed to at least partially excuse the behavior of one. It doesn't, and the film's last act doesn't play, despite stellar work from Watson and Wilkinson. The film belongs to Tom Wilkinson, who starts off as a confident man preoccupied with work who loves his wife but gives off subtle notes of displeasure when the expectations of a well-run household are let down. By film's end, his ability to love has strengthened, but at great cost. Watson does a fine job convincing of real love for James, yet an overriding need to be free of him. However, Rupert Everett, looking gaunter than ever with sunken eyes, is almost a parody of supercilious British aristocracy, so much so that he is not a believable cause of passion. Fellowes maintains James's point of view throughout the film, which makes the lovers appear inconceivable (although he does prominently feature each of them driving, separately, but recklessly, a metaphor for their behavior in addition to obscuring which is guilty). Support is mostly in service to the story's twists and turns with Bassett's housekeeper a decent woman who is guided by past rights and wrongs. David Harewood ("The Merchant of Venice") is almost a comical character as the inspector who is so outrageously tripped up when he least expects it. John Neville ("The Adventures of Baron Munchausen," "Spider") is the epitome of refinement as Bill's father, Lord Rawston. John Warnaby ("Ali G Indahouse") is James's colleague, reactive to his changing behavior and Hermione Norris is James's assistant Priscilla, who carries a torch for him and is used to underline his undeterred emotions towards his wife. "Separate Lies" is comprised of only quality ingredients but the director's assembly is not wholly satisfying.

An older man rides his bicycle down a tree lined English country lane when – WHAM! – he is struck by a speeding passing vehicle and tumbles to the side of the road. This brief, careless act of violence will impact the lives of those closest to it in actor/scribe Julian Fellowes directorial debut, Separate Lies.” Separate Lies” feels like a cross between the Monty Python sketches about the vedy, vedy civilized British upper classes and a Masterpiece Theater adaptation of a novel about the vedy, vedy civilized British upper classes. As the story unfolds we meet James and Anne Manning (Tom Wilkinson and Emily Watson), a prim and proper upper middle class couple with a flat in London and a plush cottage in the country. They seem settled into a happy existence but a random act puts things into motion that will spawn a spider web of lies and deceits that will resoundingly change this existence into something that neither of them expects. First-time helmer and scribe Fellowes adapts Nigel Balchin’s 1951 novel, A Way Through the Wood, and updates it for its new millennium audience. James and Anne’s marriage is not what James believes it to be. He hasn’t a clue to this fact until the husband of his housekeeper, Maggie (Linda Bassett), is tragically struck down. He believes that William “Bill” Bule (Rupert Everett), their wealthy, blandly sophisticated neighbor, is the man responsible and confronts him with this suspicion. He soon learns that this is not the case and one of the lies of the title sets things into motion. This isn’t the kind of film that should have a full synopsis as a part of the review as it will give away too many of the story plot twists. There are nearly as many twists as there are lies making this almost an absurdist bit of satire until things get serious in the film’s last third. This mix of sophisticated humor and adult drama cause me to hold it at arm’s length. All of the little intrigues woven into the fabric of the film have a manufactured, gotcha feel as scripter Fellowes moves his too civilized players through the Peyton Place-like story maze. The well-cast actors, though few in numbers, give more than adequate shrift to their characters. Tom Wilkinson is the focus of the story and the versatile actor gives some weight to his tolerant, easy-to-forgive, protective James. His response to the events that unfold around him is a little too understanding for my American tastes but the actor does give the character dimension. Emily Watson doesn’t flesh out her Anne as well and is more object of consideration than real person. Rupert Everett, looking extremely gaunt in a wealthy man elegant way, is the perfect embodiment of the bored rich guy who doesn’t care a whit about his circumstance and the deceptions that involve him. He’s not a cad but his arrogance tinges Bill with an unlikable quality that Everett pulls off. The tiny supporting cast is competently played with Linda Bassett giving a good perf as the working class housekeeper, Maggie, who cares for the Manning country home. She has a secret that makes her loyal to Anne despite tragic circumstance. Aging John Neville gives a rather touching performance as the Bule family patriarch. David Harewood has some presence in the stock role of the police inspector investigating the hit and run that you see in the film’s opening. Techs are solid all around. Separate Lies” is a cleverly done film and a skillfully handled first work by Julian Fellowes. He benefits from his veteran cast and experienced crew. This sophisticated mystery that isn’t that mysterious is a bit too civilized for my coarser American tastes