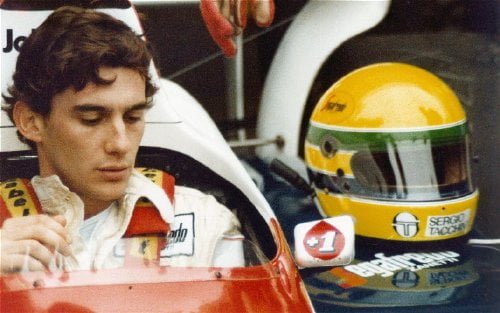 At the 1984 Monaco Grand Prix, six of the world's greatest race car drivers were bested by an unknown driving only his sixth Formula 1 race. He lost first place on a technicality, but by the time of his tragic death just ten years later, he'd won three world championships and become known for his flamboyant lifestyle. The Brazilian superstar with the amazing and nervy technique was Ayrton "Senna."

Director Asif Kapadia ("The Warrior") and his screenwriter writer Manish Pandey have made a biopic of a fascinating sports figure, a boy from a well off family who always remembered the poverty rife in his country; a very religious man with a taste for the lovely ladies and a man who kept rising above the stacked deck dealt him by FISA president Jean-Marie Balestre, who clearly favored fellow Frenchman Alain Prost (who got that win in Monaco), because of his sheer love of the sport. By no means does one need to know a single thing about Formula 1 racing to become totally engrossed with Senna's story, although the filmmakers do leave some questions unexplored. As a teenager, Ayrton made his first trip to Europe to compete in a go-kart (near film's end, when an interviewer asks him who he most enjoyed competing with, we expect to hear him say Prost, his arch-rival, but instead he talks about a racer from the kart racing days, saying that that was a much 'purer' sport without money or politics involved). He seems to easily accept the fact that that first race is given to Prost, a racer who played the political game and didn't challenge himself beyond the points needed to win a championship, then, ironically, becomes his teammate. The two share an uneasy camaraderie that first year, then things get ugly. Twice the two crash on the track and the cause is disputed. Gradually, Senna becomes supported by other racers while Prost falls out of favor. And so we have the rise, the rivalry and controversies, then the pinnacle followed by unspeakable, preventable tragedy (the new car Senna didn't trust was to blame for his death), the perfect arc for a legendary figure. Kapadia is blessed with old footage that includes a camera mounted in Senna's car so he can take his audience on laps around the track during Grand Prix races. We become mesmerized with the repetition, thrilled when Senna overtakes a rival. But except for the fact that the man was fast and especially gifted maneuvering in the rain, we don't learn what it was about his technique that made him so special. Some analysis of Senna's driving skills would have gone a long way. Senna's life off the track, too, is told around the edges. We see him enjoying the family boat. We see him with a few beautiful women, most charmingly as he flirts with an overcome Japanese journalist. But again, we are not filled in on his love life, not the fact that he had been briefly married or that his last love, Brazilian model Adriane Galisteu, was disapproved of by his family. We see him in one short clip holding hands with Xuxa, but, unless one knows she was a Brazilian television superstar whose fame was equal to his, one wouldn't learn it here. The film's last act shows the gathering storm clouds. That fateful race in San Marino began first with serious injury of his teammate, Rubens Barrichello on a Friday, then the death of a competitor on Saturday during the qualifying trials (we're told that Senna was 'uncomfortable' with Barrichello, as can be seen in a dual interview, but not why). Senna isn't happy with his car. His doctor, Sid Watkins, suggests he quit. The filmmakers subtly include several foreshadowings of Senna's fate. The first interview shown with Senna's parents shows them as supportive, but his mother expresses concern for his safety, asking that God protect him. Later, when he has a very provocative appearance on Xuxa's show in the late '80's, she kisses him once for every year leading up to...1993, his last. When Senna turns to the Bible after the tragedies in San Marino, he opens it to a passage that says he will receive God's greatest gift - God himself. "Senna" has been very well put together and is one of the better sports films in either documentary or feature format. Even if it does leave us with questions, the way Kapadia has woven together his material leaves us with little doubt that Ayrton Senna was one of the greats, both on and off the track.