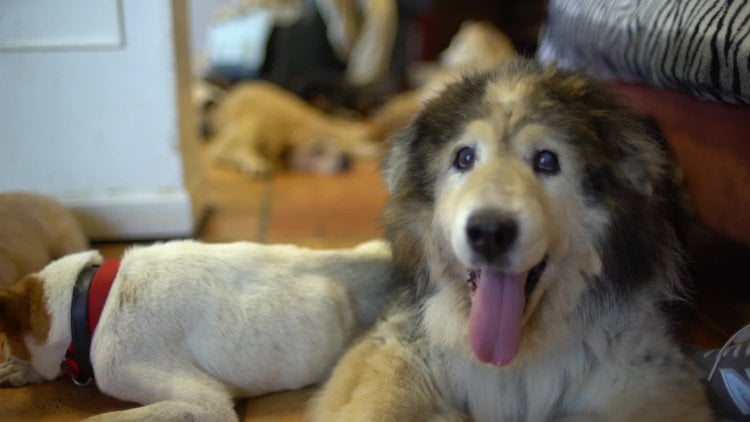 Photographer Jane Sobel Klonsky was searching for a subject when she noticed the bond between her insurance agent and her 10 year-old bulldog Clementine.  After taking their photos, Klonsky realized it was the dog’s age that had affected her so deeply, leading her to seek out organizations like the Old Friends Senior Dog Sanctuary for subjects.  The owner of senior dog Springsteen, writer/director Gorman Bechard ("A Dog Named Gucci") follows her and becomes one of his own four focuses in “Seniors: A Dogumentary.”

Anyone who’s ever wondered, as many do here, how people can abandon pets in their twilight years is sure to embrace this film, a big-hearted pitch on the benefits of adopting older dogs.  Coming at this from a filmmaking perspective, this dogumentary is merely adequate, a man and his video camera cobbling together various stories and talking heads to make his point, but the subject matter – and the subjects themselves - are all undeniably tail wag worthy.

Take Zina and Michael Goodin, the cofounders of Old Friends, who we see moving their operation into a former garden center after a neighbor’s complaint jeopardized their home set up.  Always looking out for the benefit of their charges, Zina and Michael have accomplished a lot with social media fund raising and, of course, dedication and love for these animals.  They’ve essentially eliminated euthanasia at their local pound and, for those who cannot afford the veterinary bills that often accompany adopting older animals, they’ve instituted a ‘forever foster’ program.  They and their staff, which includes misanthropic dog lover Bree and Kathryn, a kid who’s found her dream job, know each of the sanctuary’s over hundred animals by name, disposition and favored play.  Leo, the dog pictured above, became the face of their operation after he was saved, found, probably hit by a car, behind a hair salon.

The second subject, John W. Pilley Jr., is an animal psychologist who wrote 'Chaser: Unlocking the Genius of the Dog Who Knows a Thousand Words.'  Bechard shoots the two’s amazing relationship and Chaser’s unique ability to ape his master on command, an old man and his old dog constantly learning new tricks.  We also hear the story of Izzy, a dog his owner Jim estimated to be around 10 years old when he took residence at Brookdale Kingston Senior Living.  When Jim passed away, there were no local relatives to take Izzy in, his remote granddaughter instructing the staff to take the dog to a shelter.   Marketing director Lesa Fuller tells us that was not going to happen, everyone too attached to the dog she personally weaned away from grieving in Jim’s empty room.

“Seniors: A Dogumentary” will elicit smiles from any dog lover, at least until the emotional ending when we learn that the film is dedicated to Pilley and Chaser as we watch the two amble up the road.  They, along with Leo, who the film is also dedicated to, have passed, but not before bringing joy to all who met them.

I know for most everybody times are tough these days. We are suffering from the ravages of a pandemic, a shattered economy and a president who just does not care. It helps, though, when a little movie comes around that just makes you feel good. Well, I have that movie and it is “Seniors, a dogumentary.”

Documentary writer-director-participant Gorman Bechard does just what I expected when I started watching “Seniors.” He takes a subject matter that, on the surface, might turn off potential viewers. A documentary about old dogs and their last days should be a bummer, but not here. Here we have a true life story about love, dignity and the quality of life for our old canine friends.

Bechard’s attention focuses, during the course of “Senior,” primarily on Zina and Michael Goodin and their Old Friends Senior Dog Sanctuary located in Mount Juliet, TN. The couple started their project to save older dogs at a time when virtually all brought to a shelter were euthanized. The Goodin’s and their small army of volunteers, foster caregivers and veterinary professionals have dedicated themselves to ensuring the high-quality of life for every canine entering their Old Friends sanctuary. And, they work very hard to find foster and adoptive care for their wards.

We get to meet a bevy of sweet old dogs during “Seniors” and, while Old Friends is the main focus, time is also spent on Izzy, adopted by the Sycamore Trace nursing home and she fast became everyone’s pet. We get her story, including \one little interlude showing how Izzy instinctively senses and comforts the residents during their last days.

Bechard does a solid job in making the case for the Old Friends shelter and its mission to provide loving care for these sweet little creatures that give us lots more than they get. The film is homage to our aging four legged friends and, just like us old folks, deserve not just the quantity of life but the quality and dignity of it at the end.