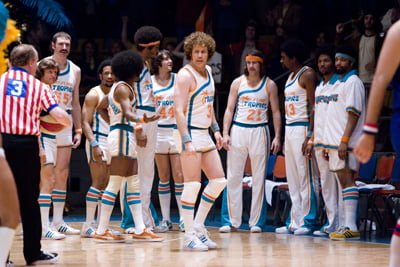 Jackie Moon (Will Ferrell, "Old School," "Blades of Glory") is the owner, coach and power forward of Flint, Michigan's Tropics basketball team who begins every home game by serenading the crowds with his former top ten hit "Love Me Sexy." Jackie keeps his team motivated with dreams of the NBA and when the basketball Commissioner (David Koechner, "Snakes on a Plane," "The Brothers Solomon") announces at an ABA owners' meeting that the NBA is going to buy it out, Jackie seizes the opportunity to prove his team is more than just "Semi-Pro."

There has been a bit of ink as late on how Will Ferrell just continues to repeat the same formula over and over again - the dumb professional anchorman with an over-inflated ego, the dumb professional race car driver with an over-inflated ego (and body image), the dumb professional ice skater with an over-inflated ego. It is true, of course, but "Semi-Pro," scripted by Scot Armstrong, writer of Ferrell's breakout "Old School," is a cut above, mainly because the comedy does not rest on Ferrell's shoulders alone. This is an ensemble piece with some truly amusing subplots, homages and running gags that made me laugh - out loud even. The Tropics are the type of team that draw crowds in the tens, but consummate promoter Moon keeps the locals interested with contests like the $10,000 free throw (which, much to his consternation, local stoner Dukes (Jackie Earle Haley, "Little Children") actually pulls off) and choreographed half time entertainment featuring the Tropics in sea creature costumes. When Moon discovers the NBA deal will dissolve his team, he slam dunks a motion to award the four ABA teams to make it by performance rather than economics, then hustles to sign the Tropics' only player to make it to the NBA - Monix (Woody Harrelson, "No Country for Old Men," sporting an Anton Chigurh cut). The Commissioner keeps upping the ante - guarantees of 2,000 attendees, etc. - but when the Tropics teeter on the brink of that forth place, he is forced to renege on the deal entirely. No matter - Jackie Moon is determined that the Tropics will go out in style. So while we're treated to such Ferrellism's as self-deluded rants, free throw crotch-cams and that just-a-hair-short-of-crossed-eye look of befuddlement, we also get Father Pat the Ref (Matt Walsh, "School for Scoundrels," "Be Kind Rewind"), a true collar-wearing cleric Moon's always threatening for his calls, the courtside duo of Dick Pepperfield (Andrew Daly, "School for Scoundrels") and Lou Redwood (Will Arnett, "Blades of Glory," "Wristcutters: A Love Story," hilarious here), commentators on a par with "Best in Show's" and Kyle (Rob Corddry, "Blades of Glory"), a fan so obsessive he cheers on Monix as he attempts to scoop his ex Lynn (Maura Tierney, TV's "NewsRadio, E.R."), Kyle's current girlfriend. And there's bear wrestling. There is also an inspired sendup of the "Goodfellas'" poker game and a play called 'the puke.' Then there is the 1970's setting which provides period fodder, like the trendy fondue Jackie serves ('It's three cheeses - Gorgonzola, Muenster and Cottage'), the tacky nightclub, The Kremlin, where the boys hang out and Lou Redwood's perpetual Scotch and ciggie. And if the idea of a Michigan team called the Tropics isn't silly enough, check out the Howard Johnson inspired uniforms designed by Susan Matheson ("Talladega Nights: The Ballad of Ricky Bobby"). "Semi-Pro" is the directorial debut of executive producer Kent Alterman ("Elf," "Little Children") and he exhibits a talent for pacing and gag placement. The production looks a little muddy, but that's in keeping with its low rent 70's feel.