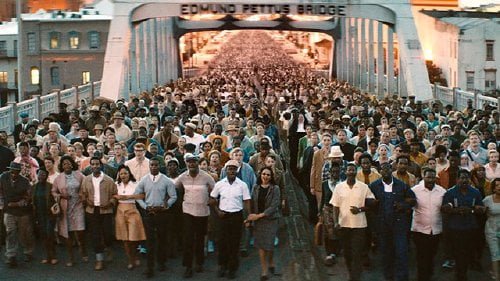 Dr. Martin Luther King Jr. is an American icon for rights and freedom for his people. During three tumultuous months in 1964 he and his followers led a movement that would result in the signing of the landmark Voting Rights Act in 1965 by President Johnson. These events would be sparked by a march that began in “Selma.”

The family of Martin Luther King has made making a movie about him difficult, his estate holding the rights to all his speeches, but writer Paul Webb found a way around them by changing a word here and there while retaining his essence. Like her subject's non violent approach, Ava DuVernay ("Middle of Nowhere") directs with a soft touch, her film's quiet, meditative tone making moments of violence all the more shocking. After a prologue featuring the innocent chatter of four little girls in a Birmingham church as we wait in dread for what we know's about to happen, DuVernay begins with what should be a simple civil matter as Annie Lee Cooper (Oprah Winfrey) tries to register to vote. The county clerk demands that she recite the preamble of the Constitution, suggesting that she might not know what that is. When Annie flawlessly quotes it, he asks her if she knows how many county clerks there are in the state of Alabama. '67' she replies. 'Name them,' he counters as her face sags in furious defeat. Her registration is denied. It's a powerful scene, setting the stage for King's campaign. As MLK Jr., David Oyelowo ("Lee Daniels' The Butler") nails the man's speech cadences and embodies both his virtues and flaws. As Coretta, Carmen Ejogo (the best thing about "The Purge: Anarchy") is a strong woman who suffers her husband's absences and infidelities. But while I never bought the great English actor Tom Wilkinson as LBJ, Tim Roth has a sneaky calmness as the notoriously racist Governor George Wallace. (The film's sprawling cast also includes Martin Sheen, Cuba Gooding Jr., Tessa Thompson, Giovanni Ribisi, Alessandro Nivola, Common, Niecy Nash, André Holland, Dylan Baker and Nigel Thatch as Malcolm X). DuVernay's film doesn't attempt to cover MLK's entire life, instead focusing on the events which led to the march from Selma to Montgomery and all the back room politicking and public violence it took to make it happen. She's shot her climax on the Edmund Pettus Bridge as if its a soaring cathedral, King's followers buttressed by white clergy. "Selma's" current relevance cannot be overstated. Grade:

Historical dramas about icons of our culture have been around since the early days of film. Director Ava DuVernay tackles one of the country’s most notable as she tells the story of the three months leading to the historic civil rights march from Selma to Birmingham, Alabama in 1964. This is a very smart move by the filmmakers as they select a most significant time in the life of Dr. King and stay within that timeframe. The revelation in “Selma” are the terrific performances by David Oyelowo as the great orator and humanitarian, both in carriage and in voice, and Carmen Ejogo as Coretta Scott King. Oyelowo captures the charismatic quality of the man and how he could mesmerize with his vibrant, intelligent speeches on the rights of all. Both are notable performances but, I fear, that many will not see it. The filmmakers capture the tone and mood at a time when the country was becoming a tinder box over the segregation controversy. King’s Gandhi-like campaign is the non-violent confrontation to change the dark path that denied black people from the rights that we all take for granted. While I am very familiar with those tension filled days, I am not sure that others are. “Selma” is a good history lesson about a great man doing a great thing.