See You Up There (Au revoir là-haut) 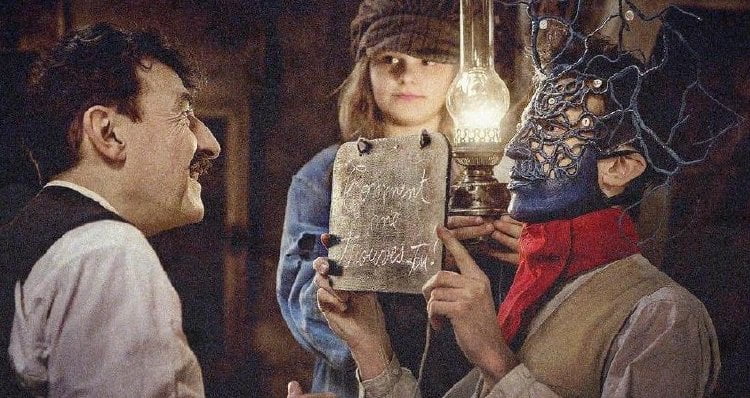 In 1918, just as news of an Armistice hits a hellish French trench, sadistic Lieutenant Henri d'Aulnay-Pradelle (Laurent Lafitte, "Elle") orders an older and very young soldier to scout the Germans' front line. They are shot and an all out assault ensues. When Albert Maillard (Albert Dupontel, "Irreversible") discovers Pradelle shot his own two men in the back, he dives into bomb crater to escape the officer, sucking air from the lungs of a dying horse to survive. He is saved by Edouard Péricourt (Nahuel Pérez Biscayart, "BPM"), but when his young savior is shot in the face, Albert rescues him both on the battlefield and off in "See You Up There."

If writer/director/star Albert Dupontel's style reminds one of the 90's films of Marc Caro and Jean-Pierre Jeunet, it is notable that Dupontel starred in Jeunet's "A Very Long Engagement," another French WWI set film about a soldier declared dead who is very much alive, the victim of a cruel and corrupt government. But there are also undertones of "Edward Scissorhands" in this fantastical tale of a mutilated man hidden away who expresses himself through art.

Edouard, whose lower jaw is now missing, begs Albert to kill him, insisting he does not wish to return home to his father, Marcel Péricourt (Niels Arestrup, "A Prophet"). Albert accomplishes this by switching Péricourt's records with those of a dead man, Edouard Lariviere. Ironically, Albert is stopped by Pradelle at the train station, Edouard's sister Madeleine Péricourt (Émilie Dequenne, "Our Children") searching for him. Edouard is forced to show her the grave of another man. Another irony ensues, the corrupt Pradelle profiting from the burial of his compatriots Using Chinese labor with no English language skills to match bodies to their burial sites. (A third and fourth surprise await with this development alone.)

As Edouard rejects horrific reconstruction and prosthetic solutions with guttural grunts and a sign ('Piss off!'), Albert finds work as an elevator operator (in a Chaplinesque touch, he is spotted by his pre-war fiancee, who silently slips him back his ring). With Edouard stashed in his humble living quarters, Albert worries about the younger man's depression. Then one day, a young girl delivering newspapers connects, able to understand Edouard's attempts to communicate. Louise (Héloïse Balster) encourages Edouard, whose artistic talent finds shape in a series of stunning masks and a papier-mâché horse's head. But his next artistic outlet, one which both turns the tables on and is complicit with post-war corruption, will have a profound effect on both men.

Dupontel and Biscayart are a classic odd couple pairing, the former a conservative middle-aged Everyman, the latter a lanky elite artist. Dupontel, his worried brow balanced by his brush moustache, keeps his feet on the ground, fighting for survival. Biscayart, his huge, expressive blue eyes peaking out over a surgical mask adorned with a curlicued moustache, rebels against his monied upbringing. Lafitte's villainous Pradelle is countered by Arestrup's Péricourt, a man with hidden depths. Newcomer Balster delights as Edouard's sidekick, her 'translations' a continual running gag. The film also stars "The Princess of Montpensier" herself, Mélanie Thierry as a Péricourt maid who catches Albert's eye (and heart).

Dupontel's period production is beautiful, cinematographer Vincent Mathias employing long, overhead tracking shots, like the one which opens the film following a dog across no man's land to the soldiers' trench. Edouard's masks, which range from fanciful sculptures to a kinetic merging of drama and comedy to a feathered peacock head, are breathtaking. Visual effects and mattes are seamless. Christophe Julien's orchestral score is studded with whimsical flourishes.

An adaptation of Pierre Lemaitre's novel, "See You Up There" is many things, but first and foremost it is a refreshing alternative to Hollywood summer sequels and super heroes.

November 1920, Morocco. Albert Maillard (Albert Dupontel) is under arrest and, when questioned by the chief of police, he tells him that “it’s a long story.” The cop has time to spare and Albert tells him his arduous and compelling tale in “See You Up There.”

Albert Dupontel not only stars, with Nahuel Perez Biscayart as artist Edouard, in this elegant multi-layered study of war and the aftermath on those who fought, and sacrificed, in the trenches of World War I, he also directs and writes the screenplay, adapted from the novel by Pierre Lemaitre, The Great Swindle (2013).

I was a little bit familiar with the story told in “See You Up There,” about two men, victims of the war and those commanding them, who come up with a plan to get rich and screw the government that so grandly screwed them and their brothers-in-arms. What I did not expect is the beautiful production and superb acting that propel the story to unexpected heights.

There is much going on here. During the last battle at the very end of the war, a battle set into motion because of the vainglorious ego of Lt. Pradelle (Laurent Lafitte), Albert is buried in a shell hole and rescued by Edouard. Then, the artist is struck down by enemy fire, destroying his jaw and causing him great suffering. Through the remainder of the war and after, Albert stays by his friend’s side and cares for him.

As Edouard slowly recuperates, Albert encourages the artist to begin his art again. Edouard creates an elaborate mask for himself, then much more. His talent is soon released and he devises a plan to get rich quick – “take the money and run,” as Edouard’s diminutive friend and translator, Louise (Heloise Balster), says. The plan is elaborate and, at its center, is Edouard’s father, Marcel (Neils Arestrup), whom he despises. But, again, there is more as the story and scheme unfolds.

Albert Dupontel does fine job and wears his multiple hats quite well. The battle scenes are convincingly done, showing the utter horror of war. But, the story, with the flamboyant Edouard’s creativity in full bloom, is an almost fantasy concoction of art, choreography, friendship and loyalty. And, love, too.