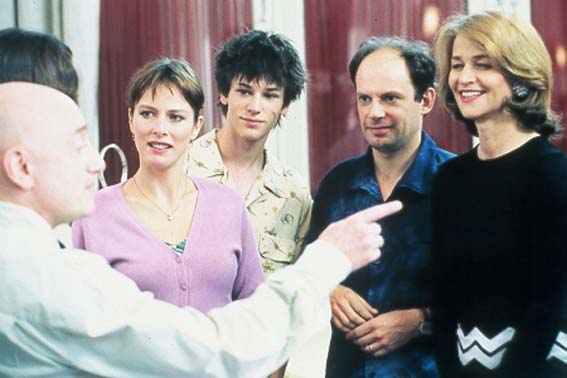 Writer/director Michel Blanc ("Grosse fatigue") has whipped up a typically French romantic comedy which is an engaging romp despite its cast of thoroughly unlikable characters. Blanc paces his film so quickly that before one has fully absorbed the ramifications of one character's despicable action, the action has moved on to another bit of bad behavior. "See How They Run" is deliciously amusing on its surface, yet offers insights into the human condition as an after taste. Blanc begins his film with a dinner party and ends with a garden party, both hosted by the wealthy Lanniers. Initial impressions of those around the dinner table are tweaked as the script drops in unknown details later on which give us a fresh slant on the characters - Elizabeth's good friend Julie is really her husband's ex-mistress, Jérôme is broke but trying to appease his wife to fill in the void left by the death of a child, Elizabeth may be subconsciously enabling Bertrand to spend time with a male lover to maintain her marital status quo. Blanc also slips sly little jokes throughout his tale. English actress Rampling complains that Touquet is being 'overrun by the English.' Lulu's complaint that mints 'take her throat out' is mistaken for the effect of a certain sexual act when overheard by her husband. Funniest is the affect of a broken typewriter key on a suicide note. Charlotte Rampling is exemplary as a pampered woman whose casual moves always carry a a cutting undercurrent. Her interplay with Bouquet hints at a lesbian attraction which mirrors Bertrand's behavior at home. Karen Viard's material obsessions give way when her maternal needs are satisfied by caring for Julie's abandoned baby. She softens the character considerably only to begin spiking it with psychological undertones of a different nature. Denis Podalydès is the piece's dupe and his frantic solo activities on the outskirts of the central action give the film a lot of its buoyancy. Gaspard Ulliel ("Strayed," "Brotherhood of the Wolf") is fine as Véronique and Jérôme's teenage son Loïc, perhaps the only normal person in the bunch. A subplot involving Elizabeth and Bertrand's selfish daughter Emilie (Lou Doillon), who has travelled to Chicago with dad's employee Kevin (Sami Bouajila, "The Adventures of Felix") is played broadly and is not very satisfying. Vincent Elbaz is more interesting as a single-minded sexaholic who hits on every female in Touquet until he's snagged by Courau's Julie, who gets just what she deserves. The film's wrapup in the Lannier's backyard reunites the entire cast (a bit problematic in that Loïc's vacation girlfriend Carole and her brother Romain are in inexplicable attendance) and leaves everyone off in the same consequences in which we first met but had yet to understand them.