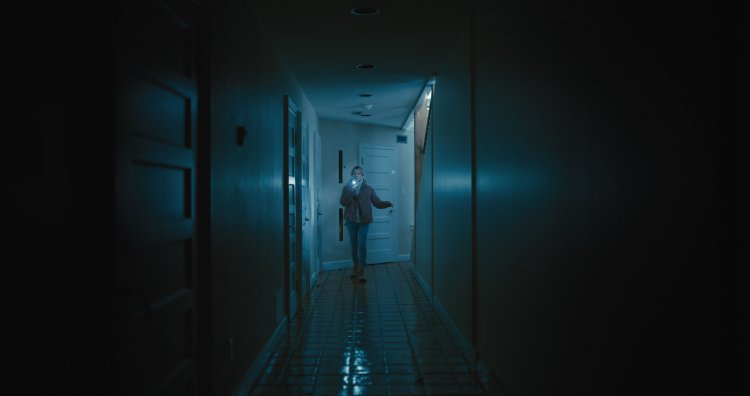 A former alpine skier headed to the Olympics until blindness derailed her career, Sophie (Skyler Davenport) is so aggressively independent she tries to evade her mom (Natalie Brown, TV’s ‘The Strain’) leaving the house to head to a remote estate for a cat sitting job.  Once there, she deletes her mom’s voicemail about a handy app, but Sophie will find accidentally locking herself out of the house won’t be the only time she will end up turning to “See for Me.”

Debuting feature screenplay writers Adam Yorke and Tommy Gushue reshuffle a bunch of genre clichés so that their deck comes out just off kilter enough to keep us interested by defying expectations, at least until that foreseeable happy ending.   (They do miss one late-breaking opportunity to pull the rug out from under us by refusing to upend an assumption made because of sound, but maybe this belongs in the ‘if I thought of it, others will, so not doing that is the surprise.’)  Director Randall Okita ensures his home invasion thriller doesn’t outstay its welcome with efficient pacing, but “See for Me” never really rises above B movie streaming level.

The See For Me app allows blind users to connect with an operator who ‘sees’ for them via directed video chat, a scenario set up when home owner Debra (Laura Vandervoort), a young woman taking off to celebrate her divorce from an older man with neither money nor maturity (their home belies the former), calls after she’s left to see if Sophie’s set the alarm.  Immediately thereafter, Sophie steps outside for a cigarette.  She’s annoyed by the first operator she connects to, but clicks with Kelly (Jessica Parker Kennedy, TV's 'The Flash'), a young army veteran who otherwise spends her time shooting up targets in videogames (see Chekhov’s gun rule).  Earlier, Sophie had used a friend, Cam (Keaton Kaplan), in the same manner, but he checks out because of the moral implications of what she’s asking him to do, the heroine’s big character flaw the film’s biggest ace up its sleeve.

That evening, Sophie will be awoken by noises in the house which we have seen are three burglars (Pascal Langdale’s Ernie, Joe Pingue’s safecracker Dave and George Tchortov’s Otis) intent on gaining access to a hidden safe.  Sophie, of course, gets up to investigate, turning on the cat collar monitor she uses to track her charge.  That draws the attention of Ernie, who Sophie inadvertently manages to stay one step ahead of, but not without having drawn suspicion.

The filmmakers have an interesting spin on the ‘victim-forced-to-pretend-all-is-well-to-responding-cop’ cliché, but Deputy Brooks (Emily Piggford) is good at her job.  Unfortunately for Brooks, so is Kelly whose proactive strike hits its target with unfortunate timing.  From this point forward the proceedings, including the revelation of the mastermind’s identity, are all too easy to see.

“See for Me” shakes up the usual plays enough to make it an above average little thriller, but it also falls down on the job with basic details enough to keep it from soaring higher.

IFC Midnight opens "See for Me" in theaters and everywhere you rent movies on 1/7/22.