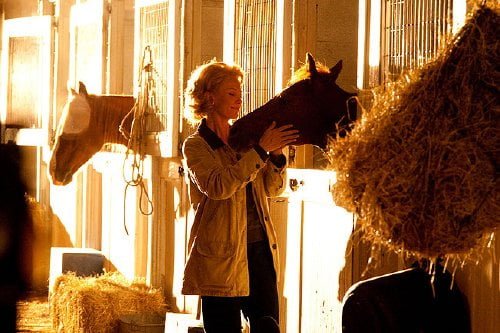 When Penny Chenery Tweedy (Diane Lane) returns home from Denver for her mother's funeral, she also gets to check in with her dad (Scott Glenn, "W.") and Meadow Stables, his Virgina horse farm. She finds both in decline. When her father passes, she discovers they owe more on taxes than the remaining horses can be sold for, but despite her husband and brother's wishes, she decides to run it, betting everything on a foal she has belief in, a horse that would become the greatest racehorse in history, "Secretariat."

The film may be called "Secretariat," but screenwriter Mike Rich ("Finding Forrester") does little to bring the horse's personality to the forefront. This is the story of Penny Chenery and it is a thoroughly square, traditional movie about a pearls, flip and sweater set mom in sensible heels liberated enough to support her teenaged daughter's anti-war artworks and defy her husband's wishes to follow a dream. Diane Lane is perfectly cast and pulls us into her story, but the unfortunate and obvious blue contacts she's been made up with keep pulling us back out. Still, director Randall Wallace ("We Were Soldiers") makes the racing scenes exciting, putting us on the horse, in front of and practically under the horse which challenges everyone's expectations but those in his own home court. Penny seems the typical 1970 era housewife when we first meet her, concerned about her husband and three children, loving towards her Alzheimer's afflicted dad (who presents her with a gold horse pin that her mom always used to wear). But Penny sends her family back to Denver without her, having a desire to take a look at the farm with the assistance of her dad's loyal assistant Miss Ham (Margo Martindale, "Hannah Montana: The Movie," "Orphan"), who advises the news is not good. We're just as surprised as Miss Ham, in a scene played with terrific gumption by Lane, when Penny confronts her dad's trainer for selling off horses in a deal which benefited another of his clients. The trainer comes back, all barking masculinity, but Lane's Penny stands up and throws him out. Bravo! But now what to do.... Well, there's dad's dearest friend, Bull Hancock (Fred Dalton Thompson, TV's "Law & Order"), who puts her onto 'retired' Canadian trainer Lucien Laurin (John Malkovich), a real character as it turns out. But Penny's best move didn't even require her to make one. Her dad, who had two of his mares bred with stallion Bold Ruler, had a deal with its owner, wealthy horseman Ogden Phipps (James Cromwell, "Babe"), that whoever won a coin toss could pick the foal they wanted. Penny's research on the bloodlines had her leaning towards the less obvious choice as a great mixture of both speed and endurance. Ogden won the coin toss and picked the other foal. When Penny's horse is foaled, Laurin marvels as he's never seen a horse stand so quickly. Groomsman Eddie Sweat (Nelsan Ellis, "True Blood's" Lafayette) and Penny fall in love with the horse they call Big Red. There are two races at play in the structuring of "Secretariat" - the race to the Triple Crown and the race to beat financial odds that could prove devastating losses for the Tweedy family and Penny's brother Hollis (Dylan Baker, "Revolutionary Road"). After losing family friend Bull, Penny, a business administration graduate, and Bull's son Seth (Drew Roy) came up with the unique idea of selling off Secretariat's stud services in advance, gambling on his future wins. They struggled, but eventually got surprising results when Penny appealed to Ogden. Penny's emergence as a competitive horsewoman and businesswoman in a male dominated arena was really notable, something the filmmakers underline with the reactions of Penny's peevish brother and her chauvinistic husband Jack (Dylan Walsh, TV's "Nip/Tuck," 2009's "The Stepfather"). The filmmakers parallel of Penny's blossoming against that of her eldest daughter Kate (Amanda Michalka, "The Lovely Bones") isn't as effective, but serves to show the familial sacrifices Penny chose to make. Besides some of Lane's scenes and the dawning realization that the Gospel "O Happy Day" singing, plaid wearing groom is played by the same actor who is the swishiest character in "True Blood," the racing is the thing here and Secretariat (the horse was named by Miss Ham after a number of names were rejected, although the film doesn't explain the genesis of the one that stuck) was one surprising horse. After being named "Horse of the Year" in early starts, he lost the last big race before the Kentucky Derby, only to take both that and the subsequent Preakness from a last place start. His Triple Crown win at the Belmont has never been surpassed and was surprisingly uncharacteristic - the horse known more for speed than endurance won the longest of the races by 31 lengths! (Watch for the real Penny Chenery - she's the one who looks like a Kennedy - as an extra behind Lane.) There hasn't been a Triple Crown winner since. And, unfortunately, the film ends on this note of triumph without any real end notes. Outside the racing, "Secretariat" is a film about people picking each other up - when Penny's down, along comes Miss Ham; when Lucien's blue, Penny cheers him up, etc., etc., all within Penny's circle with some outside males (her husband back in Denver; Pancho Martin (Nestor Serrano, 2005's "24," "Definitely, Maybe"), owner of chief competitor Sham) providing the friction. Besides Lane, Malkovich is quite entertaining, as much for his quirkiness as his out there wardrobe. Real life jockey Otto Thorwarth plays the adventurous Ron Turcotte, who subsequently lost the use of his legs from a racing accident. Oddly, in a bit of HBO series-heavy casting, "Entourage's" Kevin Connolly plays journalist Bill Nack, one of the first to believe that Penny's horse just might have something. Big Red himself was represented by five horses, but Wallace hasn't figured out how to connect the horse with his audience the way he has with its costars.