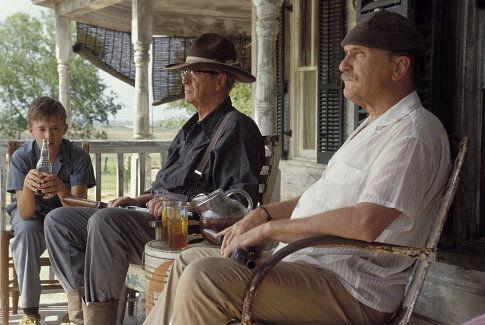 Walter (Haley Joel Osment, "A.I.") is upset when his flighty single mother Mae (Kyra Sedgwick, "Personal Velocity") tells him she's leaving him with two elderly eccentric uncles he doesn't know so she can learn court reporting in Memphis. Mae says they're rumored to have millions and that Walter should try to ingratiate himself. Uncle Hub (Robert Duvall) is gruff but has a mysterious secret which kindlier Uncle Garth (Michael Caine) begins to tell the boy about and so Walter learns that they belong to a clan of "Secondhand Lions."

Writer/Director Tim McCanlies (Director, "Dancer, Texas Pop. 81," Writer, "The Iron Giant") tips us off about how his story will unfold with a brief prologue showing two old geezers buzzing under a highway overpass in a biplane followed by a young man receiving a bad news phone call. While this unabashedly sweet and sentimental tale is everything I was afraid it would be, I could not help but be affected by it, largely due to Duvall's perfectly pitched performance and McCanlies' sure handed creation of a child's unique world. Walter is introduced to his uncles by a barrage of unwelcoming signs on the dusty dirt road that leads to their old Gothic Texan farmhouse. The men clearly want nothing to do with visitors of any sort, but don't put up a fuss having Walter deposited on their doorstep because he seems quiet, although Hub immediately informs the boy that he'll be fending for himself. Ensconced in a third floor turret room, Walter finds a stack of old trunks covered in far-flung travel stickers. Beneath a layer of sand at the bottom of one is an old photograph of an exotically beautiful woman. The uncles spend their days sitting on the porch with their rifles to shoot in the air when the procession of traveling salesmen, attracted by their rumored wealth, attempt to call. Garth and Hub are pleased to see that Walter's presence has upset the obnoxious relatives who visit weekly in hopes of inheritance and even more pleased when Walter suggests they give a salesman a chance and he pitches a clay pigeon launcher. Newly inspired to actually spend their money, Garth begins gardening, Hub buys a plane kit and the two take delivery of a zoo lion to stage a home grown safari. Walter saves the old lioness by admonishing his uncles for not giving it a sporting chance and she becomes his pet, named Jasmine after the Arabian princess who Garth has told him was once Hub's wife. McCanlies uses his lion as a metaphor for the uncles by presenting it as something old and presumably useless, which nonetheless nurtures the life of a young boy. It is also a symbol of the exotic locales and tales that Garth spins for Walter via flashbacks of wild adventures with the French Foreign Legion. Clearly we are seeing Garth's stories through Walter's experience, as old cheesy movie serials full of leering villains, beautiful maidens and dashing heroes (Young Hub is played by Christian Kane ("Just Married") while the less daring but more duplicitous young Garth is portrayed by Kevin Haberer). When Walter doubts certain elements of Garth's tales, Garth replies that sometimes it is better to believe in something whether or not it is actually true, a sentiment that supports the film's final act when Mae returns with new boyfriend Stan (Nicky Katt, "Insomnia"), a private investigator who claims Hub and Garth are bank robbers. An epilogue, which returns to the film's prologue, settles the matter and while McCanlies could be accused of going over the top, the surprise he springs is genuine and capped with an amusing visual joke. Duvall is terrific as the gruff old man who is yanked back from yearning for death. Slowly he responds to the interest shown in him and delights in the toys and gadgets that make life interesting again. His new fight is exemplified in a scene where he takes on a gang of young toughs with unusual results. Caine acts almost as narrator, a gentler man than his brother who quietly looks over him while spinning tales of his former glory. As he acts with Osment, one can't but help be reminded of the older actor's kind words to the younger thespian upon winning the Best Supporting Actor Oscar the year they were both nominated. Osment gives an unflashy performance yet is able to pull the heartstrings in his emotional showdown with Hub. The actors help one look askance at McCanlies's tendencies to get cute, such as always lining up the brothers' five dogs with their heads all cocked in the same direction. McCanlies's, production designer David J. Bomba ("A Civil Action") and art direction John R. Jensen ("Divine Secrets of the Ya-Ya Sisterhood") take the one rural Texan location and create both a forgotten old broken down home and a nostalgic wonderland divided into cornfield, shooting field, fishing pond, barn, porch and house. A scene in a town barbecue shack oddly lacks a proprietor, or any kind of help for that matter, though. This film is a reminder of Diane Keaton's largely forgotten, but more emotionally true "Unstrung Heroes," another tale of a young boy left with two eccentric uncles. "Secondhand Lions" isn't big on subtlety, but it is well crafted.

Walter (Haley Joel Osment) is an introverted 14-year old whose flighty mother, Mae (Kyra Sedgwick), suddenly leaves him, in the middle of nowhere, at the rural home of his cantankerous great uncles Hub and Garth McCaan (Robert Duvall and Michael Caine). The prospect of a summer with no TV and no phone looks to be a disaster for the teenager, but looks can be deceiving in "Secondhand Lions." Mae leaves Walter under the guise that she is heading off to court reporters school and that she'll be back when she finishes the course and lands a job. But, the boy has heard the many broken promises before and despondently agrees to stay with Hub and Garth. He does not know what to make of these two crazy old codgers, especially when they pull out their shotguns to shoot at traveling salesmen who stop by to bilk the old men out of some of their rumored wealth. The McCaan brothers, local legends tell, may have bee Mafia hit men who robbed Al Capone, bank robbers, war criminals or any number of things to explain their endless supply of money. As you would expect, this polarized, unconventional family will become whole and happy as Walter hears the stories about his uncles and finds, locked in an old trunk, a picture of a beautiful, exotic woman. He asks Garth, the less threatening of the brothers, about the picture but is told little. Slowly, over time, the boy hears the stories of his great uncles' colorful lives and exploits. They went to Europe on the eve of World War One, joined the French Foreign Legion and led lives straight out of Indiana Jones. Walter doesn't know if the adventures of Hub and Garth are just tall tales or the truth but, the longer he lives with the codgers, the more he comes to believe the stories as real. "Secondhand Lions" is a better film than it has a right to be and that is due to the considerable talents of the core cast. The story, by writer-director Tim McCanlies, who penned the screenplay for the wonderful animation "The Iron Giant," walks well-trodden ground as the fish-out-of-water Walter must cope with abandonment, being thrust into an scary world and grows to overcome his insecurities and become a man. A better treatment of a boy and his uncles is given in the quirky little comedy, Diane Keaton's "Unstrung Heroes." Fortunately, for "Secondhand Lions," there are Robert Duvall, Michael Caine and Haley Joel Osment. I swear, I could watch Robert Duvall read the Bible (and I think I did in "The Apostle") and still be captivated by the actor's talents. He is riveting in "Open Range" and helps "Lions" to be a step above its clichéd story. It's not often that you can watch a 72-year old take on four burly teenagers, defeat them, befriend them, bestow upon them his words of wisdom and send them on their way - and make it believable. Duvall does it. Haley Joel Osment does a fine job of portraying Walter. The character is not a stretch for the young thespian but Osment does his best to rep the transformation of Walter into a smart, kind, selfless and understanding young man. Michael Cain bears the burden of being the narrator/storyteller of Hubs reckless and brave adventures and is less a presence than his co-stars. Kyra Sedgwick, as Mae, is two-dimensional, at best, and is little more than a plot device. Techs are first rate and all of the players behind the camera give a good showing. Director of photography Jack N. Green shows the rugged vastness of the McCaan land and does a fun job in capturing the old tales of Hub's adventures as seen through Walter's eyes. Production design keeps the period rather ambiguous, except for the number of vintage cars that give you a clue that this is the 50's or early 60's. There is a real lion in "Secondhand Lions" when the McCaans use some of their mystery money to import a jungle cat to their farm so they can hunt it. But, the poor thing is old and tired and they can't bring themselves to kill it, especially after Walter befriends the beast and lets it live in their cornfield. This kind of quirkiness helps the otherwise routine story and, with the stars, keeps things a bit above the ordinary. I came out of "Secondhand Lions" feeling manipulated but not minding and