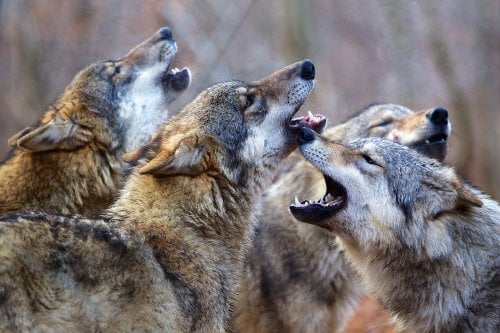 During the last Ice Age, the earth was plunged into a winter that lasted 80000 years. Once ended, life flourished for 12000 more years until a new creature – man – entered the picture. Documentary filmmakers Jacques Perrin and Jacques Cluzaud, who made the mesmerizing, Oscar-nominated “Winged Migration (2001), return to nature once again with “Seasons."

Jacques Perrin and Cluzard, the Oscar nominated French filmmakers of "Winged Migration," return with another nature documentary, this time telling the topographical history of Europe through the eyes of the animals who once ruled it. The documentary's title is misleading as it does not chart the course spring, summer, autumn and winter but the dramatic changes endured by animals at human hands. 80,000 years ago, we are told in the film's fitful narration, it was always winter until the earth tilted on its axis just enough for sunlight to make radical change, bringing in the 'golden age of the forest' and the beginning of seasons. We see lush forests inhabited by moose, wild horses, wolves, lynx, foxes, porcupines, hedgehogs, squirrels, badgers, bears, bison and too many birds to mention. In the distance a human figure plays a flute, in harmony with the surroundings. Millennia go by and suddenly an arrow lodges into a tree as the period of hunter gatherers begins. It is somewhat difficult to discern what the filmmakers are up to, though, until they reach their final act, the rise of agriculture, humans taking over the land. With one image, a group of hedgehogs rolling into balls as traffic bears down on a road, the filmmakers sum up what has happened - the animals' kingdom is shrinking and being divided. Overhead shots, some beautiful like a shot of a snow laden tree dissolving into the palm of a cloud, others informative, land carved into fields as far as the eye can see, are often as impressive as the spectacular close ups of nature. A literal birds-eye-view as a duckling tumbles from its nest is both heart stopping and joyous. A ground shot captures a shell shocked bird on a battlefield. Billowing clouds of pesticides illustrate a whole new kind of war. "Seasons" has a powerful message, but sporadic narration leaves us too much in the dark in its early goings. Grade:

At first, “Seasons” did not feel like a documentary of the seasons with which we are familiar. As the film and its intentions become clear, I realized that the two Jacques were painting with a broader brush and “seasons” last millennia. The film begins at the beginning of the Golden Age of European forests and introduces all the critters that still exist from that time. We are introduced to the migration of caribou to the Arctic Circle, a baby deer being born, a mama bobcat and her cubs, wolves hunting wild horses, a badger hunting a hedgehog, birds that swim underwater, a snake stalking its mouse prey and other wildlife to, eventually, man. Prior the introduction of the world’s greatest predator, the Jacques show a world of life, death and survival and one of incredible beauty. The sheer numbers of the various species that are chronicled are amazing. But, the incredible feats of photography, as in “Winged Migration,” are what set the two Jacques apart from other nature documentarians. There is a lot of “how the heck did they do that?” moments, making “Seasons” a visual feat. You also get a concise history spanning from the end of the Ice Age to modern times, showing how man intruded on and conquered nature, despite the costs, like species extinction.