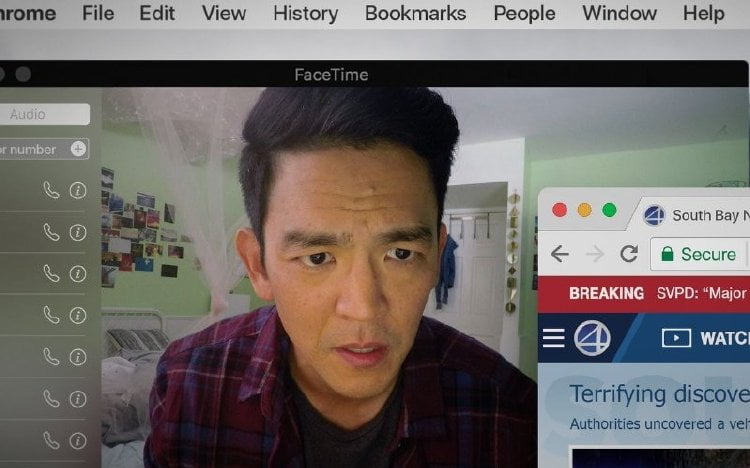 After his wife Pamela (Sara Sohn, 'Twin Peaks: The Return') dies of cancer, David Kim (John Cho) keeps his emotions in check with his sixteen year-old daughter Margot (Michelle La). Then she disappears, and David realizes just how little he knew her when he uses the family PC and her laptop to go "Searching."

Producer Timur Bekmambetov has become enamored of the type of screen-based story telling seen in his "Unfriended" films. Now, he steps up his game with cowriter (with Sev Ohanian)/director Aneesh Chaganty by getting out of the horror genre and into a mystery thriller which is also a family drama. Chaganty and Ohanian have cleverly utilized relatable online investigative tools (who among us has not been frustrated by come-ons offering to find a friend if one will only subscribe for $49.95?), but they've also elevated their story above gimmickry with themes of parental trust and grief coping mechanisms. If only they didn't jump the shark in solving their own mystery. The film's opening takes a page from Pixar's "Up," documenting the Kim family from the time of Margot's birth, the event noted with the creation of a new Facebook page. An upright piano is purchased through eBay, video showing mother and daughter at its keyboard. A report of lymphoma and video of Pamela aborting one of her runs with David is followed up with the creation of a memorial page. One can see the missing mom in the two faces featured in Margot's first day of high school picture. The montage never breaks from the filmmakers' premise (we even see the evolution of browsers and the like) yet it moves us with its arc of family joy to tragedy. It takes David a while to realize his daughter is missing. After chiding her for forgetting to take out the trash, his last communication was a call from her suggesting her study group was going to run all night. The next morning he gets ready for work, noting that he'd missed calls from Margot overnight, but it isn't until a little while later that he notices the trash is still unemptied. Even more alarming, Margot's laptop is on the kitchen counter. He's mollified a bit when the parent of an old friend of Margot's tells him of a camping trip, but on the day of the return he learns from the boy that Margot never went. At that point, he files a missing persons report with the police and in seemingly no time at all, he hears from Detective Vick (Debra Messing), assigned to the case. "Searching" is told entirely from David's point of view and his perspective changes continually as he works to crack the case in parallel with Vick. We watch as he gets around passwords to various accounts, but with everything he learns, he seems to take a step back. He is astonished to discover that his daughter's been depositing the weekly $100 for piano lessons she stopped six months prior. He also learns she really has no friends. Vick's discovery of security footage showing Margot's last known whereabouts getting off a highway lead to red herrings and false suppositions. At one point, David installs hidden cameras in his own brother's (Joseph Lee) apartment. Although we see everything on a computer screen, unlike "Unfriended," it is not always the same one, and the mix includes everything up to streamed TV newscasts with David being interviewed (or caught punching out a suspect) and police interrogations featuring Vick. This was accomplished by fixing GoPro cameras atop laptops, in stationary positions aping security and by using iPhone footage and the filmmakers have been pretty consistent (I only noticed one cut to a closeup that made little real world sense). The actors had to learn to act directly into a camera lens, counter intuitive to most film shoots and Cho does an exceptionally good job taking us through varying emotions as the case twists and turns. Messing's character is a little more problematic, her all consuming passion in the investigation at odds with everything we've ever heard in movies about missing persons cases. "Searching" could almost be used as a guide book for amateur online PIs, but while the investigation is riveting, its solution is a groaner, a bit of over-the-top outrageousness that cheapens the film. Thankfully, the title also alludes to a father finding his daughter in an emotional sense, and that is the aspect of the film that it leaves us with. Grade: