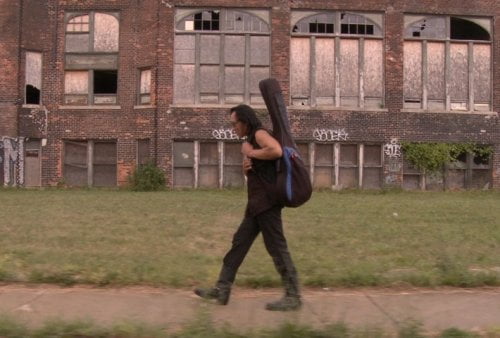 In the early 1970's, an American girl brought a copy of Cold Fact to South Africa thinking the boyfriend she was visiting there would like it. That copy multiplied, the album began to be pressed locally and soon it had sold an estimated 1/2 million copies. As one person notes, every house you went into had the Beatles' 'Abbey Road' album, Simon and Garfunkel's 'Bridge Over Troubled Waters" and 'Cold Fact.' Rodriguez was bigger than Elvis and the Rolling Stones in Capetown, but all that was known about him was what was written on the album cover. It was said he had committed suicide on stage by setting himself on fire. When he was asked to write the liner notes for the CD reissue of Rodriguez's second album, 'Coming from Reality,' superfan Stephen ‘Sugar’ Segerman asked if their were any musicologist detectives out there. Journalist Craig Bartholomew-Strydom took the bait and began "Searching for Sugar Man."

Well, director Malik Bendjelloul's title is a bit misleading, but he knew a great story when he heard one. Bendjelloul had been making short documentaries for Swedish television when he decided to travel to look for material. He met Stephen ‘Sugar’ Segerman, a former lawyer and jeweler who now owns a record store, in 2006 and couldn't get his story out of his head. What's surprising is that it's now over ten years old and had never been brought to a global audience before and most Americans still have no idea who Jesus 'Sixto' Rodriguez is. (Check his songs, especially 'Cold Fact's' 'Crucify Your Mind,' out on youtube.) Bendjelloul was faced with telling a story which had little in the way of documentation, given Rodriguez's quick fade to obscurity in the U.S., so he and his cinematographer Camilla Skagerström, using a Sony EX1 camera and Super 8, created a bunch of breath-taking cityscapes contrasting Detroit with Capetown, juggling them with interviews and stills. Bendjelloul even used a Super 8 app on his iPhone and edited this footage together with animation depicting events, beginning in 1968 with producers Mike Theodore and Dennis Coffey, who first checked out the local musician at a bar by the Detroit River. Despite the fact that the guy performed with his back to the audience, they were so impressed, they agreed to produce his first album. Both men think Rodriguez is the equivalent, if not the superior, to Bob Dylan and are mystified as to why he never took off. Speculation points to his name. There's a brief jog to Palm Springs to visit Steve Rowland, who produced Rodriguez's second album, before heading to Cape Town and tracking how the phenomenon built to such a head that someone finally decided to track down the artist who, remember, most accepted as dead. Up until this point the film is lovely to look at and rather melancholy, a portrait of someone who created art that was never appreciated. With the move to Cape Town, the documentary begins to get more analytical. Interviewees share their white liberal experience of Apartheid, how cut off they felt from the rest of the world, how they knew their government was bad, but not how the rest of the world viewed them, because the government controlled the media. Rodriguez's anti-establishment voice was the first one they heard that inspired them to rebel, to take a stand. Media libraries manager Ilse Assmann shows us a copy of 'Cold Fact' that has had its 'Sugar Man' track purposely ruined to ensure compliance with the government ban on its radio play (the lyrics were about drugs) and how the banning just stoked teenaged desire to play it. When Steve Segerman discovered, after playing Rodriguez's music for years, that he was unknown in the U.S., he was beyond astonished. He tried to 'follow the money' of record contracts and got nowhere. Bartholomew-Strydom ran into one dead end after another himself, until he noticed Dearborn in a lyric and finally made the connection to Detroit, but it was a web site parodying Missing Children ads on milk cartons that made the breakthrough when Eva Rodriguez responded, saying that the man was her father, leaving a phone number. Segerman had perhaps the defining moment of his life when his wife answered the phone in the middle of the night to his find his musical idol on the other end of the line. What happened next is like a fairy tale and Bendjelloul can begin to work with archival footage. It's all very moving, and he's built the Capetowners' quest up enough that we discover the real Rodriguez right along with them. And yet, he fails to answer many of the questions raised along the way. That money trail ended with Clarence Avant, whose Sussex Records was long out of business when he defensively obfuscates to the camera - did Avant knowingly cheat an artist he claims to admire of South African profits the man never knew he had? There are questions left about the albums' failure - what was done to promote it, for example, and who *were* those other people listed on them? We meet Rodriguez's three daughters yet hear nothing of their mother(s) nor understand the current familial relationship. And why, after everything has come to light, has this story still remained under wraps for over ten years? But despite these lapses, the film remains incredibly moving. Rodriguez himself remains a bit of a mystery. The man is not a self-promoter, but a true artist of the hippie era who made and continues to make his living in construction. When he's filmed in long tracking shots trudging through the snow to his humble home or around his neighborhood, you can see the self-consciousness on his face. And yet, he also seems incredibly open, interested in the people around him. The man who never knew he had a following takes to the stage in front of 20,000 to sing thirty year old songs like he's been doing it all his life.