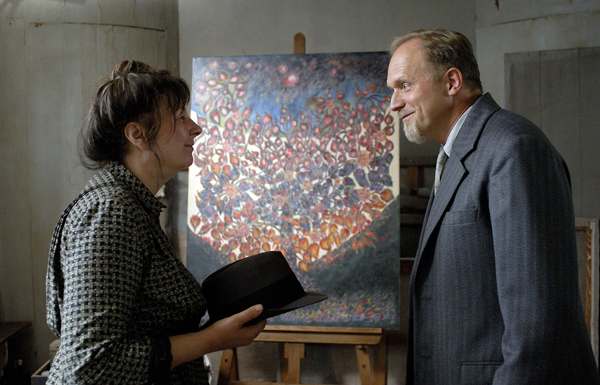 In 1912, famous art critic and collector Wilhelm Uhde (Ulrich Tukur, "The Lives of Others"), known for his early recognition of Picasso and naive painter Henri Rousseau, moved forty miles from Paris to the small town of Senlis in order to write and rest. His landlady, Mme Duphot (Geneviève Mnich, "Poison Friends"), seeks cachet by inviting local art lovers to meet him. Uhde suffers their bourgeois banality and shocks Duphot with his interest in a small painting leaning up against her wall, one that he is shocked has been painted by none other than his strange, 48 year-old housekeeper "Séraphine." Cowriter (with Marc Abdelnour)/director Martin Provost, whose film was nominated for 10 2008 Cesar awards and won 7 including Best Film (over Foreign Language nominee "The Class"), Best Actress and Best Cinematography, delves into the mystery of artistic creation by refocusing attention on naive painter Séraphine de Senlis, a religiously-inspired savant, told to paint by her guardian angel. Yolande Moreau ("Amélie," "The Last Mistress") brings all kinds of layers and mystique to the titular role, but Provost's ambiguous approach to Uhde's behavior and the excessively underlit cinematography prove frustrating in the overall viewing experience. Still, there are merits to even these obstacles. Séraphine is shown going about her day, in which she cobbles together a living with a series of arduous jobs including cleaning, washing laundry in the river and assisting the local butcher. When she is not laboring, she takes time outs to appreciate nature, and at night, she paints more than she sleeps. She spends most of her money on art supplies and creates her own paints using natural substances she never divulged but here is shown to include the blood of animals. She is regarded as the town loony by all except the nuns of the Saint-Joseph-de-Cluny convent, where she worked for 20 years. Once Uhde takes an interest, Séraphine begins to come out of her shell, eventually believing his critiques of her work, although he is exasperated to still find her scrubbing his floors. No sooner has Séraphine exhibited romantic interest in her benefactor, however, jealous of the woman who turns out to be his sister, Anne-Marie (Anne Bennent), than Uhde must leave France because of the war. Séraphine becomes odder than ever, abandoning everything for her art. Thirteen years later, Uhde returns to France, moving to Chantilly, but neglects to look his former find up until he finds her work, much progressed, at an exhibition of local artists. He sets Séraphine up financially, but everything comes crashing down when the Great Depression hits. Séraphine has spent her money voraciously and no longer knows how to do without. She is admitted into the asylum when she is found wandering the streets one morning in the wedding dress she inexplicably had made for herself. Yolande Moreau is extraordinary, at first presenting us with a simple woman who is a bit odd (she never acknowledges the shopkeeper from whom she buys her paint supplies, for example), then one whom encouragement turns demanding. Moreau's performance suggests some level of autism in Séraphine Louis. But as she loses her grip after Uhde's departure, she becomes almost animalistic, painting obsessively and subsisting almost as an afterthought on stale bread. Moreau whips up religious ecstasy. Tukur, however, paints a vaguer picture. He is a German of renown in France with a real talent for spotting same, yet he gives us no clue as to why he simply walked away from one of his greatest discoveries, not once, but twice (he famously stated Séraphine died eight years before her actual demise in his autobiography). According to an interview in the press notes, this ambiguity was Provost's choice, and if nothing else it paints Séraphine as a martyr to her art. And yet he also gives us no real feeling of where she stood in the art world or why Uhde kept stringing out his promise of a solo exhibition. We also are given no understanding of the friendship Séraphine shares with Minouche (Adélaïde Leroux, "Flanders"), a much younger woman who sticks by her when the going is rough and benefits when her friend is underwritten by Uhde. Laurent Brunet's ("The Grocer's Son") naturally lit cinematography underscores the incredibly difficult conditions under which Séraphine worked, but at times one only knows the film has not stopped by the small sounds emanating from the screen which has been utterly dark for seconds. The film is so dark overall that it can be a chore to watch. Along with those candlelit painting sessions, art direction and costume accentuate time and place. "Séraphine" is a mesmerizing portrait of an artist that gives exposure to beautiful work too little known, but it makes it audience work for its art.