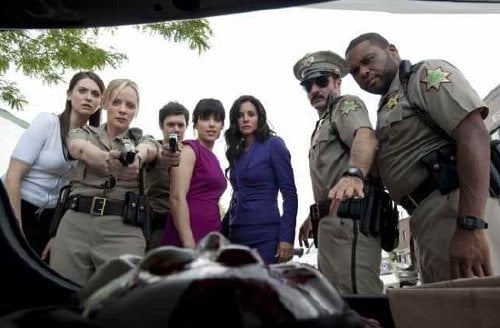 It's been ten years since the last killings in Woodsboro when Sidney Prescott (Neve Campbell) returns to her home town on the last stop of her book tour. She visits her old friends Sheriff Dewey (David Arquette) and Gale Weathers (Courteney Cox) now married, but her presence pulls good old Ghostface out of the woodwork again, just in time for the local cinema club's retrospective of the Stab series, in "Scream 4."

Original director Wes Craven and screenwriter Kevin Williamson return to reboot the franchise and damned if they haven't managed to give an old saw a new twist. "Scream 4" is modernized as a look at today's celebrity culture and the rush to profit from dubious circumstances while also updating its self aware references to comment upon the current trend of remaking classic (and not so classic) horror films of the 70's and 80's. The film's a fun ride for those who remember the original fondly, but some of those jokes about the cutting room floor should have been taken to heart. As the Dimension logo fills the screen we hear the infamous ring tone that precedes the jibes of Ghostface ((voiced by the series' Roger Jackson). Everyone in Woodsboro is so inured its Ghostface history that 'What's your favorite scary movie' calls have worn out their welcome. But Sherrie's (Lucy Hale, "The Sisterhood of the Traveling Pants 2") getting creeped out by the caller who tells her he'll be the last person she sees alive and the Facebook stalker haunting her friend Trudie (Shenae Grimes, the rebooted '90210') seems to be the same person. Williamson's cooked up an opener within an opener within an opener here (the central one features 'True Blood's Anna Pacquin and "You Again's" Kristen Bell) that's suspenseful while nodding and winking and doing overtime establishing one of the fourth installment's themes. There's a new crop of high school kids beginning with Sidney's young cousin, Jill Roberts (Emma Roberts, "Hotel for Dogs," "It's Kind of a Funny Story"), who is introduced watching Sidney being interviewed on TV by Nancy O'Dell about her new book, 'Out of Darkness.' Sidney's a bit taken aback by all the Ghostface dummies hanging in Woodsboro's Center, but it is her book signing, as well as an anniversary of the last rash of killings. But she's in for a bigger shock when the Sheriff interrupts her signing looking for a cell phone which was just used in the double murder of Jill's classmates Jenny Randall (Aimee Teegarden, TV's 'Friday Night Lights') and Marnie Cooper (Brittany Robertson, "Mother and Child") and its found in the trunk of her rental car along with a bloody knife. Her publicist Rebecca Walters (Alison Brie, TV's 'Community,' 'Mad Men') on the other hand is thrilled - the new notoriety couldn't come at a better time. Once again Cox and Arquette mirror real life (they met on the first film, married for the third, separated during this), as the two squabble over how involved Gale, who is no longer officially a journalist, can be involved in the investigation. Deputy Judy Hicks (Marley Shelton, "A Perfect Getaway") is an annoying third wheel who bakes treats for Dewey and runs interference with Gale, so Gale decides to 'go rogue,' flattering high school web blogger Robbie Mercer (Erik Knudsen, "Scott Pilgrim vs. the World") for inside info and a promise to get Sidney to his and Charlie Walker's (Rory Culkin, "You Can Count on Me," "Lymelife") cinema club. Sidney's being viewed as the 'kiss of death,' especially after Jill and Kirby's (Hayden Panettiere, TV's 'Heroes') third wheel Olivia (Marielle Jaffe) is stabbed to death as they watch from next door, where Sidney's staying with her Aunt Kate (Mary McDonnell, "Dances with Wolves"), Jill's mom. Oh, and Sidney finds Jill's ex boyfriend Trevor (Nico Tortorella) in her bedroom, having climbed in through the window, in one of many scenes paralleling earlier films in the series. The connections to Sidney's cheating mom were drained to death in the first three films, so it's interesting to see where Williamson goes. He takes a bit too long to get there, and then drags things on after that, but there are so many in jokes and references, fans should be amused. Anthony Anderson, a star of the "Scream" parody "Scary Movie," costars with Adam Brody (TV's 'The O.C.,' "Cop Out") as the Prescott patrol cops who talk about their doom before its dealt and Heather Graham, reprises the movie within a movie referencing another movie role (Drew Barrymore's "Scream" opener) from "Scream 2" in the Stabathon sequence where Gale is streamed live as she tries to catch the killer on camera. Williamson already has plots cooked up for 5 and 6 if this latest does well, but as fun as it was to see the old gang back, that just seems like squeezing blood from a drained corpse. The original freshness of "Scream" is gone, and even with the fourth's slightly new slant, the idea of more brings on the wrong kind of dread.