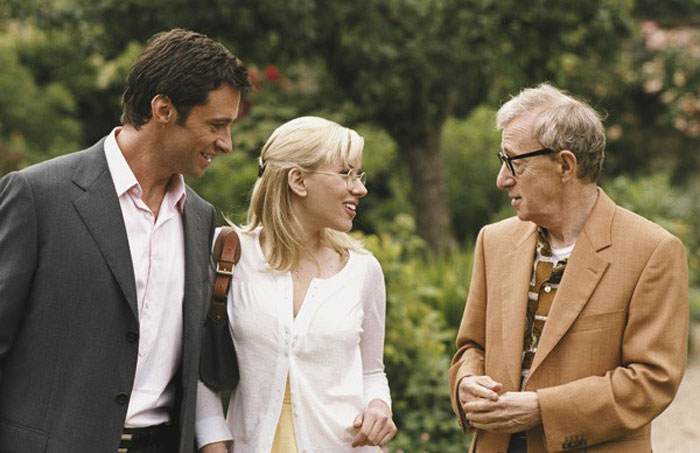 American Sondra Pransky (Scarlett Johansson) is an aspiring college journalism student visiting friends in London. She attends a stage show by magician Splendinis, nee Sid Waterman (Woody Allen), and volunteers to assist him with his amazing disappearing act. She climbs into the magic box, going along with the gag, but is shocked when recently deceased ace reporter Joe Strombel (Ian McShane) materializes out of nowhere before her. From the other side of the grave, Joe recruits Sondra to investigate the case of the Tarot Card Killer in “Scoop.”

Brooklynite and student journalist Sondra Pransky (Scarlett Johansson, "Match Point") is visiting a well off London friend (Romola Garai) when she is called upon to assist in the magic act of Splendini (Woody Allen), a New Yorker like herself. But something unexpected happens when she enters the 'disappearing' box - she is visited by the ghost of legendary and recently deceased London newsman Joe Strombel (Ian McShane, HBO's "Deadwood"), who tells her that if she investigates prominent aristocrat Peter Lyman (Hugh Jackman, "X-Men: The Last Stand") she will unveil the notorious Tarot Card Killer in the decade's biggest "Scoop." With his 37th film "Match Point," also set in London and starring Johansson, writer/director/star Woody Allen made what many found a long in coming return to form. Number 38, "Scoop," which plays like his 1993 "Manhattan Murder Mystery" cloaked in "Match Point" trappings, will suffer in comparison. Yet although Allen is mostly repeating himself, his comedy hasn't been this pure and consistent in some time. "Scoop" is a thoroughly enjoyable lark and noteworthy in that it is the first time Allen has cast himself as the father figure. He opens with a scene of that will remind many of "Love and Death." Joe Strombel is on a boat piloted by Death when he meets the woman who was Lyman's assistant before her mysterious and early demise. Strombel thinks her suspicions add up and is bursting to get the story. Meanwhile, naive and none too bright Sondra Pransky is attempting to interview a famous cult film director, Mike Tinsley (Kevin McNally, "Pirates of the Caribbean: Dead Man's Chest"), but instead, after he invites her up to his hotel room, ends up drunk, bedded and storyless. That's why Strombel's offer of a scoop is so compelling, if a little hard to take in. Sondra returns to see Splendini, actually Sid Waterman, who thinks she's a nut job until he, too, witnesses Stombel's return. Sondra learns from her well-connected girlfriend that she can attend Lyman's private club on a guest pass, so she and Sid contrive to meet him. Of course Sondra, now posing as aspiring actress ("Match Point!") Jade Spence ("Curse of the Jade Scorpion!"), falls hard for the handsome charmer while Sid, posing as her gauche nouveau riche dad, finds more and more reasons to suspect him. The main problem with "Scoop," besides its checklist of Woody plot devices (sneaking into locked rooms, etc.), is that none of the cast outside of the two leads really matter. As soon as Sondra's gained access to Lyman, the friend she's visiting drops out of the film. Jackson and McShane do little but prop up their opposing ends of the story. But Woody and Scarlett are a great comic pairing, with Johansson sweet and clueless and Allen in rare one-liner form. Watching Woody doing Borsch Belt card tricks for the delighted British aristocracy while assimilating by complaining about the state of his moose topiary back home is a hoot. His fish out of water act has never been better ('We're here for a dip,' 'I bought my first Reubens with poker winnings,' 'I love London despite the language problem.') and watching Woody racing to the rescue behind the wheel of a Smart Car is worth the price of admission in and of itself. At the age of seventy (and looking it), Allen seems to have the same compulsion to keep making movies as his journalist Strombel has to pursue leads. "Scoop" may not be on a par with the prolific director's best, earlier comedies, but it is a treat to see him having so much fun in his own element, thumbing his nose at the grim reaper.

Woody Allen, on the heels of his wonderfully Hitchcockian drama, “Match Point,” pays homage to his previous funny films, such as “Love and Death,” Broadway Danny Rose” and, mostly, “Manhattan Murder Mysteries.” “Scoop” is a light, frothy little whodunit that combines the getting-to-the-bottom-of-the-crime story thread with the relationships that develops between the characters - Sondra (using the pseudonym of Jane Spence) and her handsome, charming and wealthy paramour, Peter Lyman (Hugh Jackman), a prime suspect in her investigation; and Sondra/Jane and Sid, whom she introduces to all as her father after she conscripts him to help her get the big story that will make her career. The “Manhattan Murder Mysteries” comparison is quite apt. Scarlett Johansson gives a fast-talking, comically well-timed performance as the pie-in-the-sky optimist, Sondra, that reminds of Diane Keaton in the earlier film. She thinks that she can be impartial in her investigation of Peter as a suspect in the heinous murder spree that has been gripping London, but is soon swept off her feet by the suave aristocrat. Sondra/Jane is funny, sexy, worldly and naïve, all at the same time, and is a refreshing and likable performance by Johansson. Woody Allen shows that he still has it in him to write the irreverent one-liners – mostly given to himself as Sid but he hands Scarlett a yuck or two. He is in top form as he gets into the character of Mr. Spence, hobnobbing with the aristocracy and entertaining them with his magic tricks that he claims to be just a hobby. And, smartly Allen has made his character a father figure and friend to Sondra, which becomes a relationship of amicable love and caring. Woody Allen driving a Smart mini-car is also a sight to behold. Hugh Jackman is suave and sophisticated as Peter Lyman but is really just an object at a couple of levels: as the main suspect, for Sondra, in the Tarot killings and as the irresistible object of desire for her. Peter is a two-dimensional character and does nothing that tarnishes the luster of “Scoop’s” stars, Scarlett and Woody. This is their second collaboration after Match Point” and they make it two for two. Ian McShane is a serviceable plot device as the hard-boiled reporter but is only in it briefly as he sneaks away from the Grim Reeper to give Sondra the next clue. Techs are solid all around with crisp cinematography by Remi Adafarisin and beautifully rendered production and costume by Maria Djukovic and Jill Taylor, respectively. The opulence of Peter’s father, Lord Lyman’s (Julian Glover), English estate and manor house is palpable as Sondra and Sid sift for clues through the palatial home. The actual murder mystery often takes a back seat to the comedy and drives to a rather predictable end, but it is the getting there that is all the fun. “Scoop” is Woody in good, funny form.